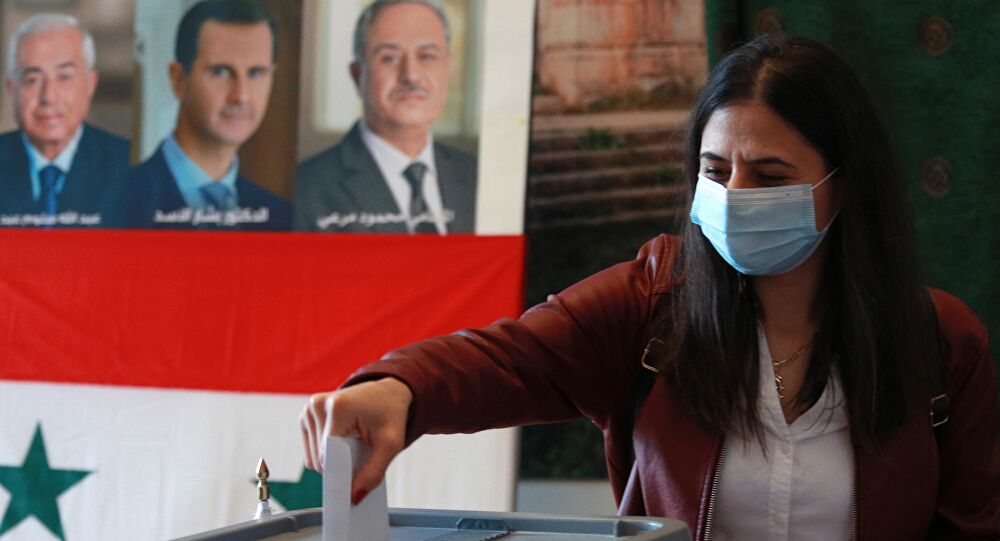 Syrians went to their embassy, or consulate, in dozens of countries abroad to vote for president on May 20, while the domestic vote will take place May 26. Some voiced their vote for President Bashar al-Assad was based on his ability to steer Syria out of a 10-year crisis, and their recollection that conditions in Syria were better before the crisis.

Syrian voters in Lebanon compared the benefits of the Syrian government, such as free healthcare and free education, with the non-existent situation in Lebanon, where even Lebanese children have no state education provided, and there are no free Lebanese public hospitals. Voters began waiting in lines from 5 am outside the Syrian embassy in Yarze, north of Beirut.  Lebanese security forces were deployed to ensure the safety of the voters as groups of men attacked Syrians in their cars with stones and sticks.

Over 1 million Syrians are living in Lebanon, some having registered as refugees, and the rest as economic migrants who fled terrorist occupations and lost income due to the crisis.  Lebanon’s population is just about 3 million, and with 1 million Syrians weighing heavily on Lebanon’s infrastructure and resources as the country fell into financial and political collapse.

Some Syrians did not vote, fearing the Lebanese army checkpoints, who would discover they had an expired residency permit because of strict laws which make it difficult to live legally in Lebanon.  Protesters tried to block buses and cars carrying hundreds of Syrians heading to vote, many of whom carried banners in support of President Assad.

The Syrian Social Nationalist Party was also present.  It is a secular party with members and offices around the world.  The SSNP fought terrorism inside Syria and Lebanon. They are part of the resistance movement in the region, against the occupation of Palestine, and are the oldest political party in the region, dating from 1932.

Besides the incumbent President Assad, the others campaigning for the position are Abdullah Salloum Abdullah, former state minister of parliamentary affairs, and Mahmoud Ahmad Marei, who heads the National Democratic Front, an opposition party.

Syrian Ambassador to Lebanon Abdul Kareem Ali said, “We are asking Western countries and the countries that support terrorism to re-assess their position towards Syria.”  The UN, the EU, and the US say conditions in Syria are not ready for the return of refugees. The US and EU have enacted sanctions against the Syrian government which are a humanitarian threat to the Syrian people.  The Syrian crisis was supported by the US, UK, and other western nations in an attempt to overthrow the existing secular government in Syria, intending to install a pro-US puppet government made up of members of the Muslim Brotherhood, in echoes of the similar project they undertook in Egypt during the “Arab Spring”.  The US project was successful in Egypt, only to be met by an uprising by the Egyptian people who overthrew President Mursi and his Muslim Brotherhood administration.

Mahmoud Ahmed Marei is the first opposition figure in the history of Syria’s presidential elections. The National Democratic Front candidate has explained that the Syrian national opposition is not attached to Western agendas to thwart the democratic process in Syria. He makes a distinction between “national opposition” which is largely based inside Syria, and “foreign-backed opposition” which wants to apply Western agendas and to divide the country into segments.  The candidate stresses that his campaign prioritizes ending the occupation of illegal forces in Syria, such as the US and Turkish forces, which occupy considerable swathes of land in northern and eastern Syria. Marei’s main goal is a national dialog conference to be held in Damascus with the Syrian government and opposition working together to reconcile differences for a peaceful solution to the 10-year crisis. He also calls for the release of all political detainees, as well as those kidnapped by rebel groups.

Denmark has begun the tell Syrians to go home, as other western countries feel the burden of hosting economic migrants. Ambassador Ali called on Syrians in Lebanon to return home, as over a million Syrians living in neighboring countries including Lebanon have returned in the past year and a half.

US, UK, Canada, Turkey, Germany and other western allies have closed Syrian embassies; therefore, preventing any vote, or participation in democracy among Syrian expatriates. The Biden administration has said it will not recognize the result of Syria’s presidential election. Germany banned any voting at Syrian missions in their country.

Lebanon is a sectarian form of government and remains deeply divided over the secular government in Damascus. Over 800,000 Syrians are registered as refugees with the United Nations, but Lebanese officials believe the total number of Syrians in Lebanon exceeds one million.

The highly sectarian Lebanese Forces Party leader Samir Geagea called on the Lebanese government to deport all Syrians who vote for President Assad. Lebanese Forces Party extremists attacked cars and buses with pictures of President Assad at intersections in and around Beirut and in the eastern Bekaa region. In another attack, a Lebanese driver ran into a group of Syrians hitting one man.

Videos on social media have circulated widely showing buses and lines of cars carrying Syrian voters being attacked by anti-Syrian Lebanese wielding sticks. One such video showed Lebanese security forces standing near a car with smashed windows in Sassine Square in Beirut.  Jounieh, just north of Beirut, has also been the scene of violent attacks on Syrians by sectarian extremists.  Another video shows six men surrounding a vehicle and kicking through its windshield while attacking the passengers inside. Cars that carried posters in support of President Assad were attacked by mobs as they passed through neighborhoods populated by anti-Syrian Lebanese.

After 10-years of fighting terrorism, which split the country, Syria is succeeding in electing its president, in conformity with the 2012 Syrian constitution.  Syria now looks forward to rebuilding what the west destroyed.  Important allies, such as Russia and Iran, have fought to give the Syrian people a chance to return to the stability they once knew.