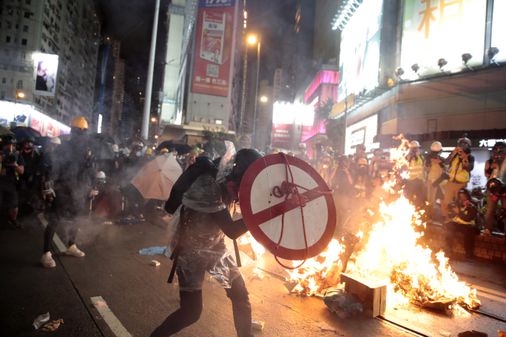 A German political party has launched an inquiry into Germany’s refugee policy in light of the situation in Hong Kong, and the granting of asylum to activists and protesters. The reaction by some to the inquiry highlights how some NGOs are trying to interfere in German decisions.

At the end of May, the German oppositional AfD party issued an inquiry to the federal government regarding the “German refugee policy towards the Chinese special administrative region Hong Kong and the granting of asylum status”. The reaction towards this request appeared unusually prompt and extreme.  In a comment for Welt-Online, the Hong Kong activist Glacier Kwong accused the AfD of inciting “xenophobia” with its request. She also claimed that the German opposition party is “abusing” the Hong Kong exiled community.

“Haven Assistance”, on the other hand, is an exiled NGO that unequivocally recommends Hong Kong activists and their sympathizers to immigrate to Europe. The Japanese newspaper The Mainichi writes: “Haven Assistance” is a group founded by democracy activists in exile to help other Hong Kong activists seeking asylum.” The organization “urges Germany and Europe as a whole to do more to help protesters who want to emigrate”.

The federal government’s answer to the AfD’s questions was extremely vague. Berlin wanted neither to comment on the two organizations nor even to assess the expected number of Hong Kong activists wishing to immigrate. “The federal government has no knowledge of its own on this issue.” was the answer.

The AfD Bundestag member Stefan Keuter, one of the initiators of the inquiry, shared an opinion that the question of NGOs’ involvement in inner political developments needs always to be estimated on whether they will become a problem in the future.

“The main difficulty is that at the NGO level people are currently congesting Germany considering it as a country for exile. And often these fleeing to Germany, NGO-associated people are those who advocate violence in political struggle. I do see a problem for the future in the advocacy of violence… In addition, the suspicion arises that politically persecuted people do not simply want to live in safety and be free from state persecution, but are also looking for a safe retreat with good financial infrastructure to continue their struggle,” Keuter stated in an interview to German media.

The “Arab Spring” has launched a process of large-scale political transformation of the countries in North Africa and the Middle East. There are many “points of tension” in the region of North Africa, in which converge the political and economic interests of external actors, including international non-governmental organizations. The lobbying of “democratic values” as opposed to communal interests led to the strengthening of the role of the West with the state and public institutions of North Africa and the Middle East. Moreover, NGOs actively participate in modern international relations, as well as in the internal policy of the countries where they perform their activities. Their actions have an even more significant impact during the times when the governments change. The most vivid examples of the NGOs’ involvement can be found in the processes before, during, and after the change of H. Mubarak’s government in Egypt, under the governments of M. Mursi and A.F. As-Sisi, and as well in Syria during the protests against Bashar Assad. Such NGOs as the National Democratic Institute, International Republican Institute, Carter Center, and Open Society Institute of George Soros became already symbols of puppeteer force to influence events during “Arab Spring” and other armed conflicts. The most common mechanisms of NGOs’ impact on the political agenda are participation in the organization of the electoral process, organization of election campaigns, seminars, and consultations for civil society.

The Bundestag inquiry about the foreign NGOs and their activities is fair and viable, especially on the background of events in Northern Africa and the Middle East. For governments and their representatives, it is important to not underestimate the often destructive power of the NGOs and their potential for interference in the inner political processes.