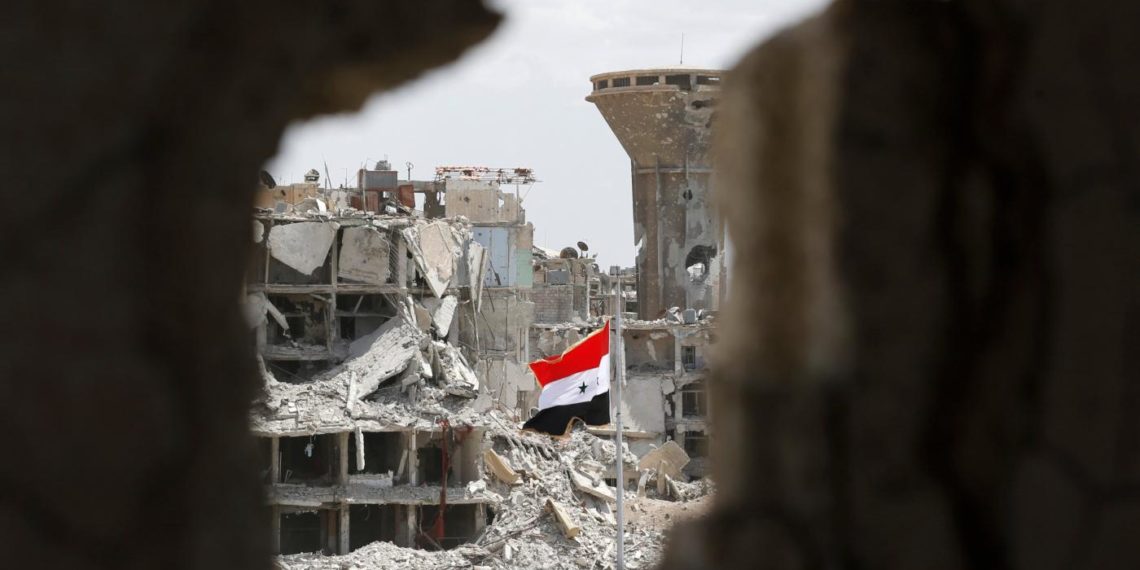 The Syrian war is over: now what?

The US and EU are holding 13 million Syrians living inside Syria as hostages to their project to effect ‘regime change’ in Damascus. Western and European governments have continued to ignore the reality on the ground. The Syrian government remains in control of the majority of the territory and the voters have re-elected the same leader in 2014 and 2021. The Syrians who never left, but stayed to protect their homes, lands, and businesses had thought if they resisted lawlessness and terrorism they would one day be rewarded with peace.  Peace has arrived, except for the Al Qaeda-controlled Idlib province, but the economy is in shambles and the western sanctions specifically prohibit any chance of reconstruction of homes, hospitals, and businesses.

Yet, the Biden administration, like the Obama administration before it, is still dreaming of ‘regime change’, and the prospects of a Muslim Brotherhood puppet installation in Damascus, which prevents any effective engagement in Syria. The US has lost influence in Syria, and it is against the US national interest to have purposely lost access to intelligence in Syria about such vital matters as ISIS and other terrorist organizations.

“Supporting the future of Syria and the region”, was the name of the fifth Brussels Conference in March. International donors pledged $4.4bn in 2021; however, UN agencies declared that over $10bn was necessary.  The current sanctions against Syria need lifting to overcome the humanitarian crisis and stabilize a broken economy.  The Biden administration is blindly following the Trump playbook, and Josep Borrell, the EU High Commissioner for Foreign Affairs and Security Policy, declared that “There will be no end to sanctions, no normalization, no support for reconstruction until a political transition will be underway.” Borrell is blindly following a failed US foreign policy.

The US-EU-NATO venture failed but succeeded in destroying the country. Through the use of mercenary fighters who followed Radical Islam, the secular nation of the US attempted to install a puppet government headed by the Muslim Brotherhood, while removing the only secular government in the Middle East in Damascus.

The Syrian National Coalition (SNC) was founded in Qatar in 2012. The US and EU recognized their invention, the SNC, as the only legitimate representative of the Syrian people.  The SNC still exists but has devolved into being controlled by Turkey, and the Muslim Brotherhood leadership of President Erdogan.

Talal Mohammad, a co-chair of the Kurdistan Democratic Peace Party, stated, “The SNC is the main reason for prolonging the Syrian crisis.” Mohammed drew attention to crimes committed in areas occupied by the Turkish military and their jihadist mercenaries, such as the attack on the Avrin Hospital before the NATO meeting on June 15th. Mohammad explained that the policy Turkey wanted to pursue through ISIS/Daesh mercenaries in the north and east of Syria is now being used politically through the SNC. He said: “The SNC must change its name from the Syrian Coalition to the Turkish Coalition.”

Jagan Chapagain, secretary-general of the International Federation of Red Cross and Red Crescent Societies (IFRC), said it was time to move beyond only humanitarian work of providing food and medicines, to smaller projects to help families plant seeds, and breed sheep.  Such a project was undertaken in Deir Baalbah, a village in Homs, where they have provided seeds, sheep, and equipment to 15 farming families Chapagain said while adding “There are another 50 families who want to join this project.” This tiny project is a drop in the bucket of need and suffering in Syria and is almost laughable at its minuscule size.

United Nations Resident Coordinator and Humanitarian Coordinator for Syria, Imran Riza, and Regional Humanitarian Coordinator for the Syria Crisis, Muhannad Hadi visited Tishreen and Tabqa dams on 16 June. Riza met with water officials who stressed the dire situation, which is the worst water scarcity in memory. Over five million people, including in northeast Syria, are reliant on the Euphrates for their drinking water, and approximately three million people for electricity. Vital infrastructure, including hospitals, irrigation networks, and water stations, are also affected. Long-term impacts include damage to agriculture, a worsening of already dire food insecurity, loss of livelihoods, and severe public health consequences.

Riza and Hadi note that humanitarian partners, including UN agencies, are continuing essential work.  Daily delivery of millions of liters of emergency water to families in the affected areas; however, they stress these measures are not a substitute for the long-term, regular and reliable access to water, sanitation, electricity, and other basic services which the Euphrates provides.

On 26 May 2021, Mark Lowcock, Under-Secretary-General for Humanitarian Affairs briefed the UN Security Council on Syria.  He made four important points:  water shortages; the economic crisis; protection for civilians; and access to humanitarian aid.

Water is the most fundamental issue for drinking and irrigation, but also electricity and food supply.  The flow in the Euphrates River reached a critical level in May, with half the amount needed to keep the Tishreen dam, near Aleppo, functioning.  The Tabqa Dam is also severely affected.  Electricity for civilians and hospitals has been cut, and pumping stations urgently need electric power.  Five and a half million people in Syria are at risk.  Crop forecasts are already poor because of drought.

The headwaters of both main rivers lie in Turkey, which agreed in 1987 to provide 500 cubic meters per second to Syria.  Of this 60% was intended to flow on to Iraq.  Turkey has this year halved the agreed flow. Turkey has also interfered with the running of the Alouk pumping station in Syria which supplies the city of Al-Hasaka and three camps with some 70,000 residents.

Reopening western embassies is a first step in the development of a postwar Syria that is vital to Syrians directly affected and to the Middle East and Europe. Russia, China, India, and the Czech Republic never left Syria, and now Greece and Cyprus are back, with Hungary, Poland, Austria, and Italy are hinting at a return. Egypt, Algeria, United Arab Emirates, and Bahrain are back and with direct flights between Damascus and Dubai.

Syria’s economic situation is more than reason enough to lift the US and EU sanctions. After a year of battling the COVID-19 pandemic, which hit Syria very hard, according to the World Food Program, more than 12m Syrians are suffering from food insecurity, and are considering necessities as luxuries.  In Syria, a kilo of beef now costs about a quarter of a public employee’s average monthly salary. In Italy, this would compare to €700 per kg. and in the US over $800.00.

The Caesar Act was the first blow to the Syrian residents. It was approved by the Trump administration in December 2019 and supported by the EU.  Its effect was a strong depreciation of the Syrian pound, which lost almost 70 percent of its value against the dollar. This plunged the economy into inflation affecting food prices, which more than tripled in 2020. These sanctions are severely affecting the local economy especially in the construction, energy, and financial sectors, blocking any possibility of reconstruction.

The second blow was the financial and economic crisis in Lebanon, which serves as a hub for international financial transactions, and many Syrian households and firms hold deposits there estimated to be worth at least $20bn.  Suddenly, last year it became impossible to withdraw or use funds in Lebanese banks.

The third blow was the COVID-19 pandemic, which hit the Syrian healthcare system already weakened by war. Over the past 10 years, thousands of medical personnel fled the country looking for an income, and only half of the pre-conflict hospitals are still operating.

Millions of migrants left Syria in search of income and stability.  Most were working until the pandemic started. They had been sending money back home to Syria to support family members. However, according to UNOCHA, remittances to Syria fell off 50 % as Syrian migrants lost their jobs due to the pandemic and lockdowns and downturns in businesses abroad in the face of COVID-19.