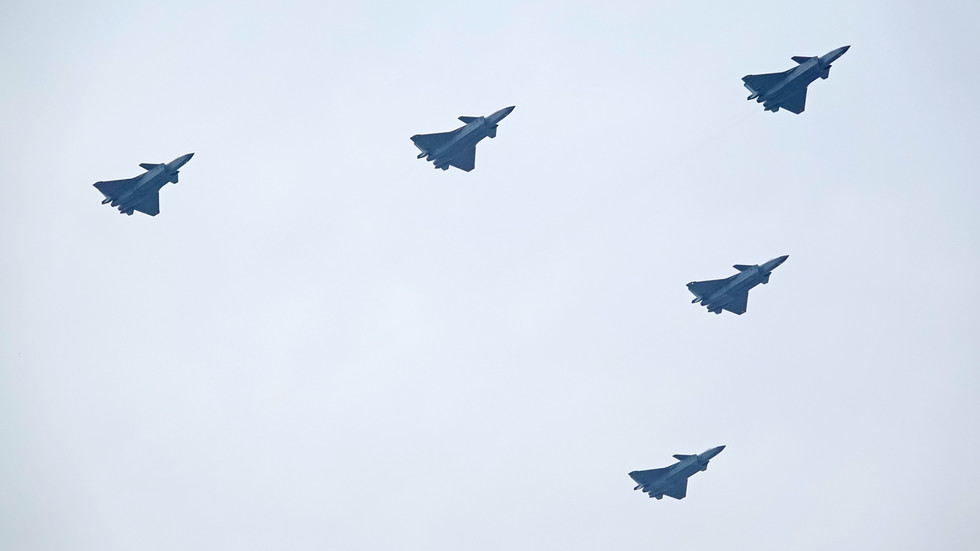 China’s Mighty Dragon J-20 stealth fighter jets flew over Beijing’s historic landmark in their largest display yet – a show of might to commemorate the founding of the Communist Party 100 years ago.

Beijing showcased the power of its air force during centenary celebrations for the Communist Party of China (CPC) on Thursday. The 15-strong fighter jet fleet flew in three V-shaped formations, with five planes forming each arrow.

In an interview with the Sina news outlet, J-20 pilot Cao Cheng detailed the symbolism of the demonstration and explained how the fleet flew in uniform precision: “Each wedge team has five fighter jets organized into three squadrons … which symbolizes that the People’s Air Force is invincible and has invincible courage.”

He added that all the members of the People’s Liberation Army Air Force had practised tirelessly to pull off the feat.

The number of fighter jets that took part in the air show is unprecedented, the largest number having previously been five. Those aircraft had been taking part in the National Day military parade in 2019, which was also held in the Chinese capital.

The 5th generation domestically manufactured Chengdu J-20, known as the Mighty Dragon, is China’s most advanced stealth fighter jet, having the ability to transport long-range missiles and operate in low visibility and all weather conditions. It is not known how many J-20s the nation currently has in its military arsenal.