Home Politics Middle East Auf wiedersehen, Frau Merkel… you will not be missed by many of us in Britain 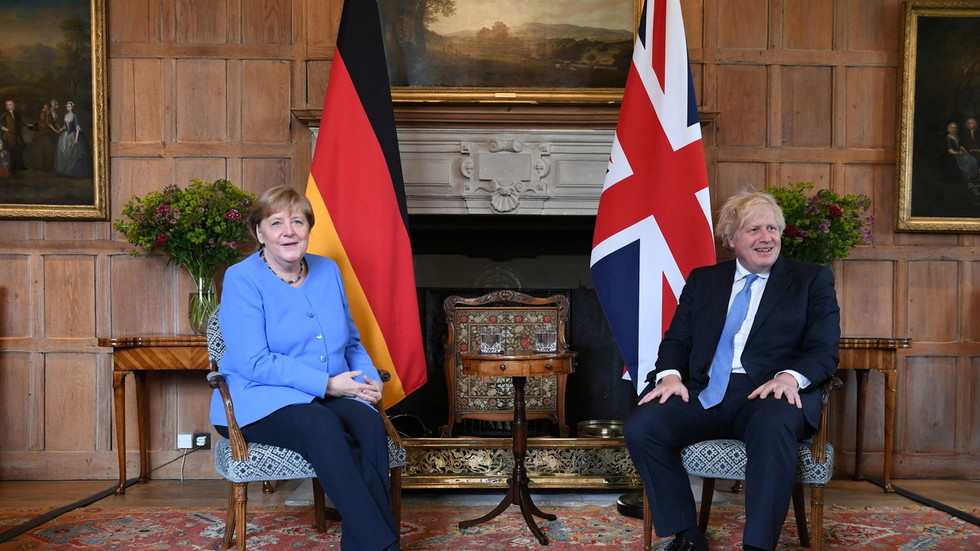 Paul A. Nuttall is a historian, author and a former politician. He was a Member of the European Parliament between 2009 and 2019 and was a prominent campaigner for Brexit.Few in the UK will shed any tears at the imminent departure of German chancellor Angela Merkel, the ‘Queen of Europe’ who has taken a hard-line stance against the UK over the years – particularly since the Brexit vote.

Merkel has been visiting Britain for the last time as Chancellor, meeting Prime Minister Boris Johnson at his country residence, Chequers. No doubt Johnson had a number of issues on the agenda, most particularly her insistence on Brits being banned from travelling to Europe, and the Northern Ireland Protocol. However, I suspect he won’t have got very far, because Merkel is both obstinate and has proven in the past to be no friend of Britain.

In fact, I would go as far to say that Merkel is one of the principal reasons the UK left the European Union. Her unbending adherence to EU rules ensured that successive British prime ministers banged their heads against a brick wall when attempting to negotiate with the bloc. Indeed, Merkel warned British MPs as far back as 2014 that the UK would not receive any special treatment if it tried to renegotiate its membership of the EU, and she proved true to her word.

This was the attitude David Cameron, the then-British PM, encountered when he attempted his renegotiation with the EU in 2016. Indeed, on the eve of the Brexit referendum, Cameron pleaded with Merkel to be flexible over the EU’s policy of Freedom of Movement. Of course, his pleas fell on deaf ears and the rest, as we say, is history.

Since the Brexit referendum, Merkel’s attitude towards the UK has hardened. In the days following the vote she warned Britain that the up-and-coming negotiations “would not be a cherry-picking exercise.” She set out her stall early, and rigidly stuck to it.

Johnson will now encounter this same stubbornness as he attempts to work around the Northern Ireland Protocol. Although Merkel has called for a “pragmatic solution,” she has made it clear that the protection of the EU’s single market is sacrosanct. I cannot see any way around the impasse, because it is a case of the unstoppable force meeting the immovable object.

Merkel’s contempt for the UK has really been highlighted during the current Covid crisis. Take, for example, her attitude towards the British Oxford-AstraZeneca vaccine. At first, she denounced it as unsafe and refused to allow people under 60 to have it, claiming it led to blood clots. This nonsensical policy had to be reversed when it became clear that Germany was falling behind in its vaccine rollout. Indeed, Merkel herself had an Oxford-AstraZeneca jab, if only to prove it was safe. For the record, her second jab was Moderna.

Now she is calling for Brits to be banned from EU states, labelling the UK a “country of concern.” This contradicts the policy of UK government, which plans to allow Brits to travel to amber-list countries “later in the summer” if they are fully vaccinated. Although this potential ban will not affect Germany, it will cripple the tourist industry in Spain and Portugal. Even Tony Blair, a cheerleader of all things European, has stated that Merkel’s travel ban “makes no sense.”

If Merkel is contemptuous of the UK, she is positively enamoured by the EU. She is part of the older generation of politicians who believe the EU is the answer to all Europe’s problems, and if the people do not like it, then tough… they must learn to live with it.

I have seen Merkel’s zeal for the EU in person. When I was a Member of the European Parliament (2009-2019) she came to address us on numerous occasions. Every time we knew what we were going to get: a guarded and dull speech, which would be lauded by the Eurocrats as if it were the Sermon on the Mount. Indeed, when Merkel came to Brussels or Strasbourg, it was as if the Queen of Europe was in attendance.

One speech in particular sticks in my mind, as it was the one occasion that Merkel let her mask slip and revealed her true ambitions for Europe. To a packed European Parliament in 2018, she announced that the EU needed to have its own army. Now, we had been saying for years that this was being planned. Indeed, when Nigel Farage claimed that the EU had ambitions for its own army back in 2014, it was passed off by Nick Clegg, the then-Deputy Prime Minister, as a “dangerous fantasy.”

So, to finally hear it confirmed by Merkel was like music to our ears. It was a real ‘gotcha’ moment. We naturally barracked her for admitting this, and she turned to us and said, “this is great, I am annoying some people.” She was mistaken, she was not annoying us at all – she was just confirming that what we had been saying for years was true. We were over the moon, because the military ambitions of the EU had been exposed, and to hear it come from the lips of the bloc’s most powerful leader made it all the sweeter.

Thankfully, Merkel will not be around for much longer. She will be replaced as German Chancellor in September by Armin Laschet, another Christian Democrat. Laschet is certainly more pro-British than his predecessor. He is the Minister-President of North Rhine-Westphalia, which was part of the Britishoccupied zone after the Second World War. Laschet has said that North Rhine-Westphalia is “intimately bound up with the United Kingdom and the remarkable dedication of our British friends.” This is all bodes well for future Anglo-German relations.

In the meantime, it is auf wiedersehen Frau Merkel… you will not be missed by us on this side of the English Channel. But before you go, I would like to thank you from the bottom of my heart for all your hard work in helping us achieve Brexit. You get top marks for that!