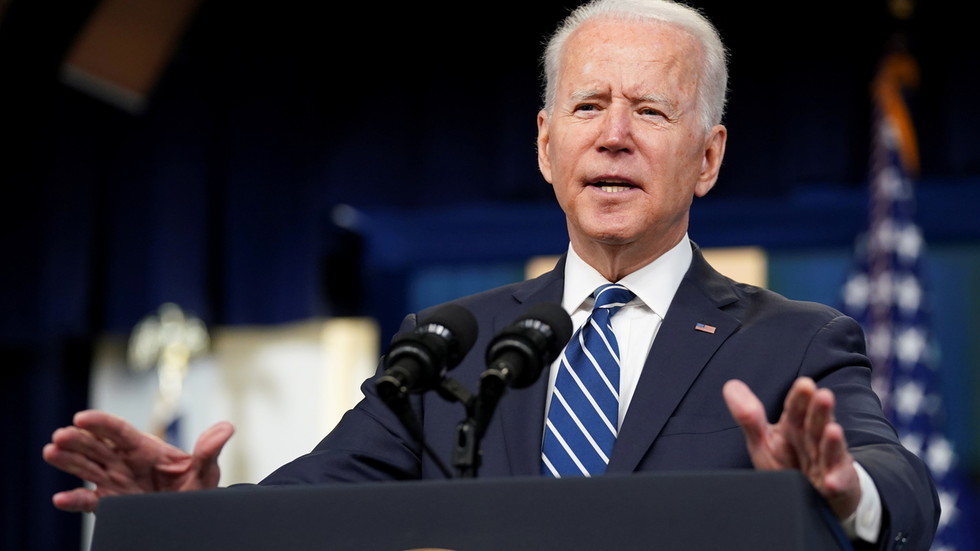 Biden says NO plan for imminent withdrawal of remaining troops in Afghanistan, despite earlier reports

Following multiple reports indicating that a full withdrawal of US troops from Afghanistan was imminent, President Joe Biden said there is no immediate scheme for the remaining troops to leave, but insisted plans are “on track.”

Major news outlets had reported earlier on Friday that troops leaving the Bagram Air Base, one of the largest military sites in Afghanistan, would be followed by a full withdrawal within days.

However, Biden dismissed those reports while speaking to reporters at the White House. Asked if a full withdrawal was taking place in the next few days, the president said “no.”

“We’re on track exactly as to where we expect to be,”  he said, referring to the plan as a “rational drawdown.”

Former President Donald Trump had previously made a deal to leave Afghanistan by May, though this deadline was pushed back by the Biden administration, which set a goal of having troops gone by September.

As he was hammered with questions on Afghanistan from the press, Biden grew visibly frustrated, citing the “holiday weekend”  as his reason for not wanting to focus on “negative” stories.

“I’m not going to answer any more questions on Afghanistan,” Biden told reporters, throwing his hands up. “Look, it’s Fourth of July … I’m concerned that you guys are asking me questions that I’ll answer next week.

NOW – Biden: “I’m not going to answering any more questions on Afghanistan. Look, it’s the 4th of July… I’ll answer all your negative questions… not negative, your legitimate questions.” pic.twitter.com/F2joLTW5aj

Despite insisting he wanted to talk about “happy things,” Biden did offer some insight into his perspective on the Afghanistan withdrawal.
Regarding concerns expressed by activists and military officials that the US departure could create a vacuum that would quickly be filled by insurgents, Biden said he is confident the Kabul government  “have the capacity to be able to sustain government down the road.”
According to reports earlier on Friday, the Pentagon was planning on a withdrawal that could have happened just in time for Fourth of July celebrations

September 11 of this year — Biden’s proposed withdrawal deadline —  will mark the 20th anniversary of the 9/11 terror attacks, which triggered the two-decade long conflict.

The war led to more than 2,300 US troop deaths and more than 20,000 others wounded. That is among the estimated tens of thousands of other war-related deaths and casualties, including around 1,000 troops deaths among other NATO forces.

A 2020 report from the Department of Defense estimated war-fighting costs had topped $815 billion. The Costs of War project at Brown University estimates the US has spent a total of over $2.2 trillion on the conflict.

“rational drawdown.” Biden
Previous ArticleIran’s IRGC Refrains From Linking Death of US Soldier to Soleimani Assassination
Next Article Auf wiedersehen, Frau Merkel… you will not be missed by many of us in Britain