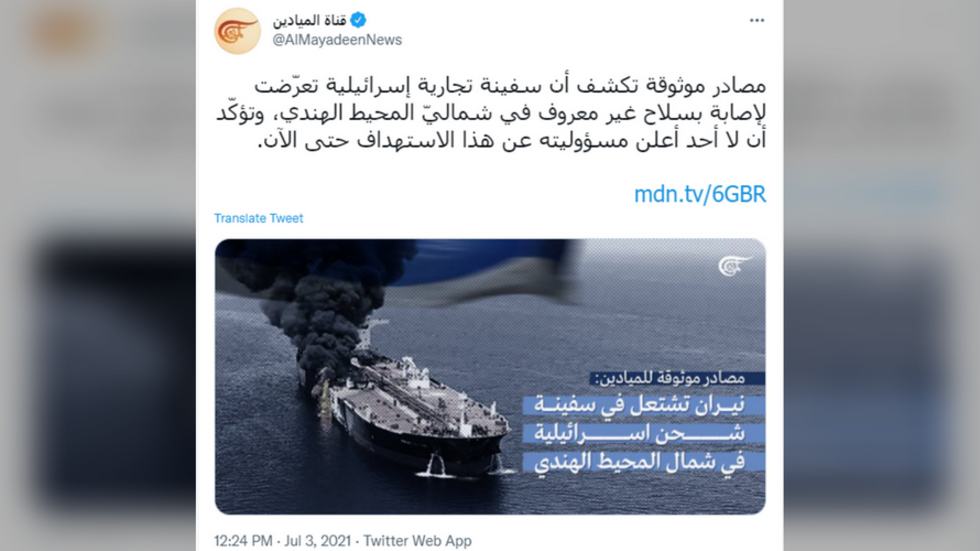 An Israeli merchant ship has reportedly been hit by an “unknown weapon,” causing the vessel to catch fire in the northern Indian Ocean. The incident comes amid rising regional tensions.

Lebanese media outlet Al-Mayadeen reported the attack on Saturday, citing “reliable sources,” and posted a picture of the damaged vessel with black smoke billowing from a fire on one side of the ship. Unnamed Israeli officials have also confirmed the incident to the Jerusalem Post. The newspaper claimed that “Hezbollah-linked” Al-Mayadeen’s framing of the report suggests the attack was Iran’s retaliation for a drone strike on an Iranian nuclear facility last month near Karaj.

The vessel was reportedly anchored in the port of Jeddah, in the Red Sea, and was heading toward the United Arab Emirates – on the other side of the Arabian Peninsula — when it was attacked. There were no injuries reported, and the extent of the damage is unclear.

Media in Israel identified the ship as the Tyndall, which is partly owned by Israeli billionaire Eyal Ofer. It flies a Liberian flag and is operated by non-Israeli crewmen.

Israel and Iran’s shadow war has heated up at sea since 2019, with Israel reportedly hitting ships transporting Iranian oil or weapons bound for Hezbollah. Another Israeli-owned vessel with a Liberian flag, a container ship called the Lori, was struck by a missile while heading for the Gulf of Oman in March. The ship was lightly damaged, and as in the case of the Tyndall, Israeli officials suspected that Iran was the culprit.

The latest incident comes one day after Lt. General Aviv Kohavi, chief of staff for the Israel Defense Forces, warned that those who attack his country will face fierce retribution. “Anyone who tries to harm the state of Israel knows that any offensive enemy activity, near or far, will be answered with a significant overt or covert response,” Kohavi said at a graduation ceremony for new IDF officers. “This is how we have behaved in the past, and this is how we will behave in the future.”