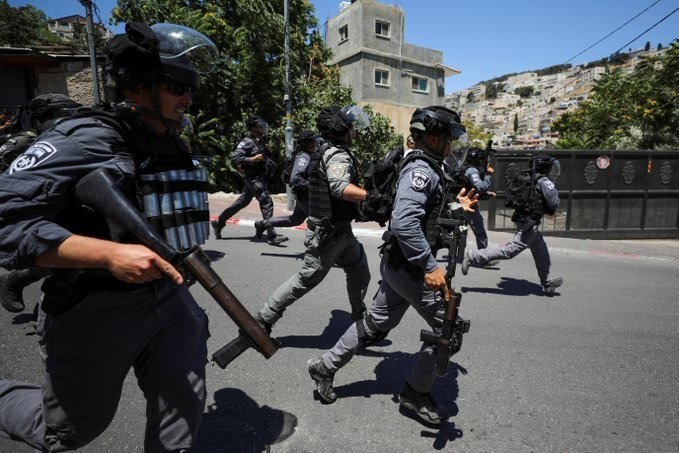 Seven Palestinians injured during confrontations with the Israeli occupation in Halhul. Settlers stormed the Nabi Yunus Mosque, in conjunction with the “night confusion” activities targeting the settlement outposts in the Batn al-Hawa neighborhood.

Al Mayadeen reporter stated that 7 Palestinians were wounded yesterday night, Sunday, as they confronted the occupation forces in Halhul, north of al-Khalil in the occupied West Bank.

Settlers had stormed the Prophet Yunus Mosque in the town to perform Talmudic rituals.

In the vicinity of Silwan town, next to the Al-Aqsa Mosque in al-Quds (Occupied Jerusalem), Palestinian youths set off a barrage of fireworks towards one of the settlement outposts.

The Israeli occupation forces engaged in confrontations with the Palestinians, and their members were deployed all over the town, in an attempt to thwart the “night confusion” activities that targeted the settlement outposts in the Batn al-Hawa neighborhood.

Activists posted on the social media platforms a video of a Palestinian woman in the town of Silwan kicking out a group of settlers who tried to storm her house in preparation for seizing it.

Another video showed the attempt of the Israeli occupation to storm a house in the Sheikh Jarrah neighborhood in al-Quds.

On Sunday, the occupation authorities had announced seizing thousands of Dunams of lands from the towns of Qarawat Bani Hassan and Deir Istiya, west of Salfit in the West Bank.

The mayor of Qarawat Bani Hassan said that the targeted areas are estimated at thousands of dunams, while the municipality of Deir Istiya called on citizens to prepare identification papers to object to the decision in the Israeli courts.