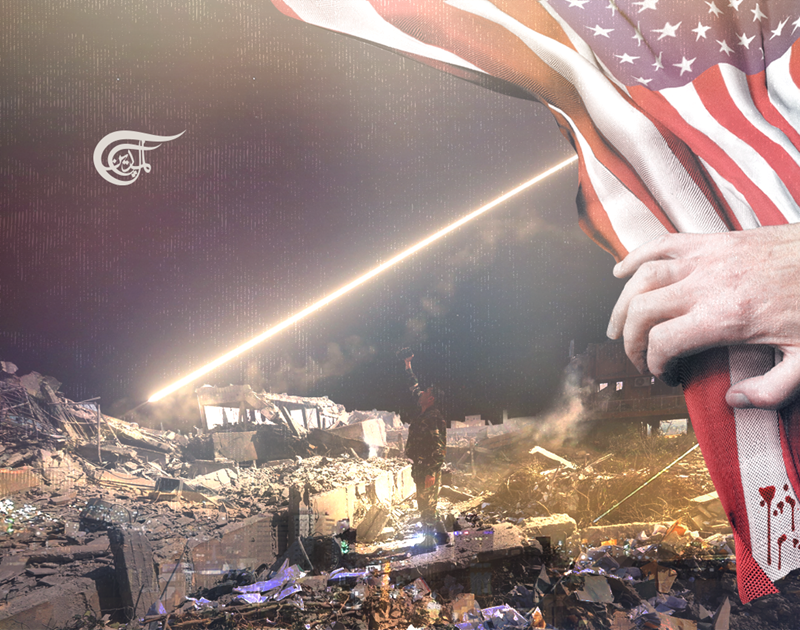 Militarily occupying Iraq and Syria is a thoroughly bipartisan policy in the United States. And bombing West Asia has become a favorite pastime that unites both Democrat and Republican presidents.

The United States believes it has the right to bomb, militarily occupy, and economically strangulate any country, anywhere, without consequence. But the world’s peoples are standing up more and more to the global dictatorship of US hegemony.

On June 27, Washington launched airstrikes against forces in both Iraq and Syria, two sovereign countries illegally occupied by the US military, which have repeatedly called for American troops to leave.

The US attack proved to be a gift to the genocidal extremists in ISIS: it helped provide cover as remnants of the so-called “Islamic State” launched a terror attack on a power grid in northern Iraq. Similarly, the US bombing killed several members of Iraqi government-backed units who had been protecting their nation from ISIS and Al-Qaeda.

It is far from the first time Washington has clearly been on the same side as far-right Takfiri fanatics. For example, current US National Security Advisor Jake Sullivan admitted in an email to then-Secretary of State Hillary Clinton in 2012 that “AQ is on our side in Syria.” And the US government supported al-Qaeda extremists in its wars on Yemen and Libya.

In addition to aiding notorious terrorist groups, these US strikes on Iraq and Syria were glaringly illegal under international law. Moreover, they constitute a clear act of aggression against the peoples of West Asia, who for decades have struggled for self-determination and control over their own, plentiful natural resources – resources that the US government and its all-powerful corporations seek to control and exploit.

The Pentagon tried to justify its attack claiming it was an act of “self-defense.” Absurdly, the US Department of Defense – the world champion in violating international law – even cited international law to try to legitimize the airstrikes.

In reality, the US military’s presence in Iraq and Syria is illegal. And under international law, a military power that is illegally occupying a territory does not have the right to self-defense. That is true just as much for apartheid “Israel” in its settler-colonial aggression against Palestine as it is for the United States in its imperial wars on the peoples of Iraq and Syria.

Iraq’s prime minister, Mustafa al-Kadhimi, made that clear. He condemned the US strikes as a “blatant and unacceptable violation of Iraqi sovereignty and Iraqi national security.”

In January 2020, in response to Washington’s assassination of top Iranian General Qasem Soleimani and Iraqi Commander Abu Mahdi al-Muhandis – a criminal act of war against both Iraq and Iran – the democratically elected parliament in Baghdad voted 170 to 0 to expel the thousands of US troops occupying Iraq.

Washington simply ignored the vote, silencing the voices of the Iraqi people – while threatening more economic sanctions on their government. In addition, the Pentagon stressed that the vote was nonbinding. Still, even the US government-backed RAND Corporation acknowledged that there “is no treaty or status of forces agreement (SOFA) authorizing the presence of U.S. troops in Iraq.”

Likewise, the United States is illegally occupying one-third of Syrian sovereign territory. The internationally recognized government in Damascus has repeatedly called on the US military occupiers to leave, but they have refused, in a flagrant violation of Syrian sovereignty.

“The presence of Americans in Syria is a sign of occupation, and we believe that all nations and governments must stand up to their unlawful presence in the region,” Syrian Prime Minister Imad Khamis declared in 2020, after the US assassinations of the top Iraqi and Iranian military leaders.

While former Republican President Donald Trump radiated a kind of neocolonial arrogance, boasting that US troops would illegally remain in Syria because “we want to keep the oil,” the Democratic Joe Biden administration has not acted much differently.

President Biden appointed hardline neoconservative operative Dana Stroul as the top Pentagon official for Middle East policy. In 2019, Stroul bragged that Washington “owned” one-third of Syrian territory, including its “economic powerhouse,” which includes the vast majority of its oil and wheat reserves.

Stroul’s promotion was an unambiguous sign that the Democrats are endorsing the same sadistic Trumpian strategy, to militarily occupy Syria, steal its natural resources, starve its government of revenue, deny its people bread and gasoline, and prevent reconstruction of what Stroul snidely referred to as the widespread “rubble.”

The reality is that militarily occupying Iraq and Syria is a thoroughly bipartisan policy in the United States. And bombing West Asia has become a favorite pastime that unites both Democrat and Republican presidents.

Trump launched airstrikes against Syria in April 2018 on totally unsubstantiated accusations that Damascus had carried out “gas attacks,” claims that have since been proven false by multiple whistleblowers from the Organisation for the Prohibition of Chemical Weapons (OPCW).

Then in December 2019, the Trump administration bombed anti-ISIS militias in both Syria and Iraq.

Biden carried out a similar, illegal attack on these same fighters in eastern Syria in February 2021. Another example of Washington serving as the de facto air force for the remnants of the so-called “Islamic State.”

The December 2019, February 2021, and June 2021 US airstrikes targeted the Iraqi government-backed Popular Mobilization Forces (PMFs), known in Arabic as the al-Hashd al-Sha’abi. In its official statement on the June bombing, the Pentagon stated unequivocally that it was attacking Kata’ib Hezbollah and Kata’ib Sayyid al-Shuhada, two prominent Iraqi armed groups in the Hashd.

The Department of Defense misleadingly referred to these units as “Iran-backed militia groups.” The US government and the corporate media outlets that act as its obedient mouthpiece always describe the Hashd as “Iran-backed” to try to downplay their role as indigenous protectors of Iraqi sovereignty and deceptively portray them as foreign proxies of Washington’s favorite bogeyman.

In reality, the PMFs are Iraqi units supported by the elected, internationally recognized government in Baghdad. The Hashd played a leading role in the fight against ISIS, al-Qaeda, and other extremist Takfiri groups in both Iraq and Syria – while the United States, apartheid “Israel”, and NATO allies spent billions of dollars backing Salafi-jihadist death squads in their genocidal war on the people of Syria.

The Hashd do indeed receive assistance from Tehran, and they have every right to do so. After all, Iran is Iraq’s neighbor, whereas the United States is on the other side of the planet. But Washington, NATO, and their de facto stenographers in the corporate press corps seek to discredit all resistance to criminal US aggression in West Asia by erasing its organic, indigenous roots and lazily depicting it as a vast conspiracy controlled by an omnipresent Iranian controller.

The PMFs made it clear that they will not tolerate Washington’s assault on their nation’s sovereignty. “We reserve the legal right to respond to these attacks and hold the perpetrators accountable on Iraqi soil,” the Hashd declared.

If Washington wants to stop attacks on its troops, there is an easy way to do that: withdraw them from the region where they are not wanted. American soldiers will be much safer at home.