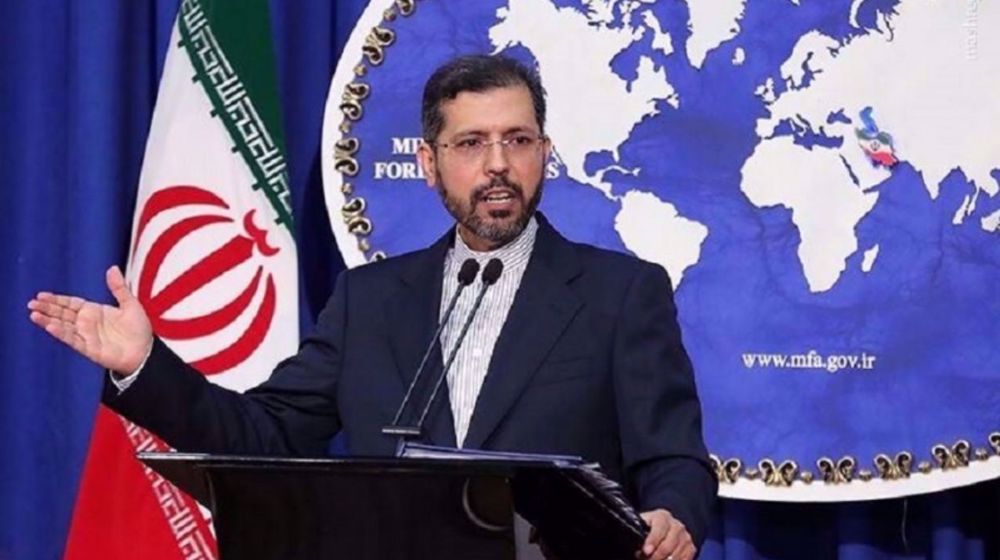 Iran says the policies it has been pursuing on the 2015 nuclear agreement with major world powers are among the “fundamental positions” of the Islamic establishment and thus will not undergo any change when the new administration takes over.

Speaking to reporters on Tuesday, Foreign Ministry spokesman Saeed Khatibzadeh said the new administration to be formed by President-elect Seyyed Ebrahim Raeisi will abide by an agreement that may be reached in Vienna, Austria, on a potential revival of the Iran nuclear deal, formally called the Joint Comprehensive Plan of Action (JCPOA).

The remarks came after some Western officials spoke of what they see as a need to wait for the formation of a new administration in Tehran before finalizing an agreement in Vienna.

Last week, German Foreign Minister Heiko Maas, whose country is a signatory to the Iran deal, said the talks in Vienna “are arduous but nevertheless, they are making step-by-step progress.”

“Surely there will be now a decisive phase in which one has to await whether the newly elected Iranian president will continue to support what we have negotiated as there are things about which we have already agreed on. That is our expectation,” Mass added.

Khatibzadeh, however, clarified that Iran’s stance on the JCPOA and the necessity for the US to remove its sanctions “are among the positions of the establishment and will not alter with a change of administration.”Iran’s top negotiator: Time for other JCPOA parties to make tough decisionsAbbas Araqchi says Tehran has already made its tough decision to save the JCPOA.

“Therefore, if an agreement is reached, the administration of Mr. Raeisi will remain loyal to it, because adherence to commitments and promises has always been a principle for the Islamic Republic of Iran, contrary to the approach of some other parties,” said Khatibzadeh, referring to the US, which signed the deal under ex-president Barack Obama and stopped compliance under Obama’s successor, Donald Trump.

Since April, envoys from Iran and the P4+1 group of countries — Britain, France, Russia, and China plus Germany — have been attending the talks in Vienna. A US delegation is also in the Austrian capital, but it is not attending the discussions because the United States is not a party to the nuclear accord.

The US left the Iran deal in May 2018 and re-imposed the anti-Iran sanctions that the JCPOA had lifted. It also placed additional sanctions on Iran under other pretexts not related to the nuclear case as part of the “maximum pressure” campaign.

Following a year of strategic patience, Iran resorted to its legal rights stipulated in Article 26 of the JCPOA, which grants a party the right to suspend its contractual commitments in case of non-compliance by other signatories, and let go of some of the restrictions imposed on its nuclear energy program.

Now, the new US administration, under President Joe Biden, says it wants to compensate for Trump’s mistake and rejoin the deal, but it is showing an overriding propensity for maintaining some of the sanctions as a tool of pressure.

Tehran insists that all sanctions should first be removed in a verifiable manner before the Islamic Republic reverses its remedial measures.

“The progress made in the Vienna talks is a reality acknowledged by all parties to the talks. However, there are still important issues that need to be decided mainly by the other sides, especially the United States. In fact, the finalization of an agreement to revive the JCPOA hinges on the other parties’ political will to take tough decisions,” Khatibzadeh said.

He said the Iranian delegation to the Vienna talks “seeks to conclude the negotiations as soon as possible and [secure] a removal of the oppressive sanctions against the Iranian nation. Nevertheless, we do not set any deadline for reaching an agreement that serves the Iranian nation’s interests and continue the talks until a favorable agreement is reached.”

“As it has been said many times, we are not in a hurry to reach an agreement, but we will not allow the negotiations to become erosive and drag on,” the spokesman added.

Khatibzadeh was further asked about claims in some Western media that the US had relayed a message to Iran through diplomatic channels about the “consequences” of attacks on American troops and facilities in the region.Iran rejects ‘baseless’ US claims to justify Syria-Iraq border raidIran dismisses as “completely baseless” accusations leveled at the country by the United States to justify its illegal aerial assault on the Iraqi-Syrian border.

“The Islamic Republic has always emphasized that the language of force and threat will have no benefit for the establishment of security in the region. The US must realize that through bullying, it will not achieve its regional goals and instead aggravates its situation in West Asia,” he told reporters.

Iran has never intended to interfere in Iraq’s domestic affairs, he said. “The repeated attacks announced by the United States against the positions of the Iraqi and Syrian forces on the border between the two countries are only meant to deal a blow to the main [forces] deterring Daesh’s sleeping cell and strengthen the remnants of the terrorist organization.”

At the order of Biden, US warplanes targeted three locations belonging to Iraq’s anti-terror Popular Mobilization Units (PMU) or Hashd al-Sha’abi in the border town of al-Qa’im in the western Anbar Province late last month.

In a letter to the UN Security Council, Washington claimed that the raid, which killed four PMU members, was meant to deter resistance fighters and Tehran from what it claimed to be conducting or supporting attacks on American personnel or facilities in Iraq.

Iran has repeatedly said that it is not directly or indirectly involved in any armed attack by any entity or individual against US personnel or facilities in Iraq.

Asked about Israel’s intention to gain observer status at the African Union (AU), Khatibzadeh expressed Iran’s deep concern over and firm opposition to such a move.

He also called on AU member states to demonstrate their political determination to adhere to the Palestinian cause against Israeli occupation, saying they should honor the decisions made by important international bodies such as the Organization of Islamic Cooperation (OIC) to oppose any membership of the occupying entity in international and regional organizations.

“The Zionist regime’s gaining of observer status at the African Union would embolden the regime to continue its colonial and racist policies, and carry out military strikes and commit more crimes against the Palestinian people,” the Iranian official said.