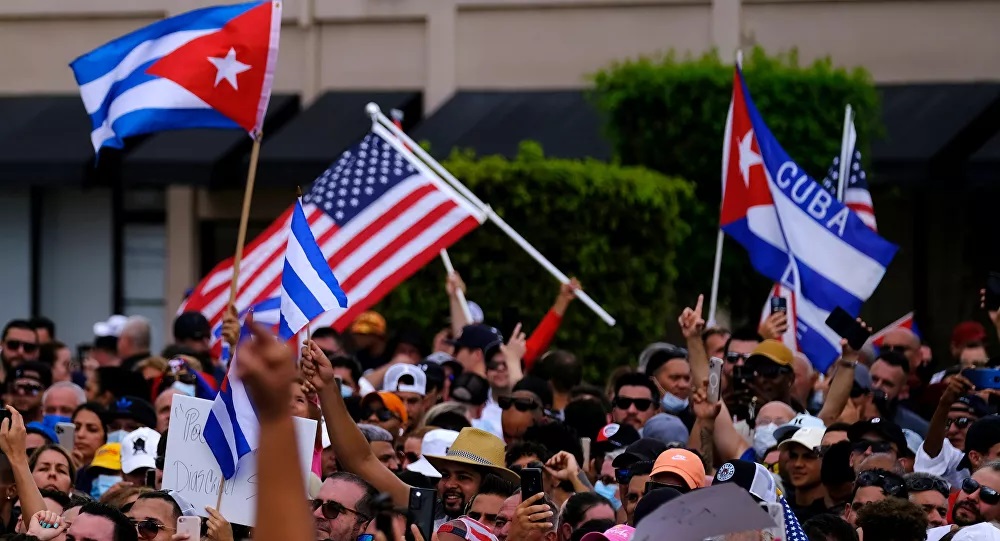 Thousands of citizens of Cuba, which has been under a US embargo for almost 60 years, preventing the arrival of humanitarian aid to the island nation during the pandemic, took to the streets on Sunday in protests driven by food shortages, high prices, COVID-19 restrictions and a lethargic vaccination rollout.

As images have surfaced showing thousands of Cubans flooding the streets in protest against poor economic conditions and the government’s handling of the COVID-19 pandemic, Miami Mayor Francis Suarez called for international intervention led by the United States “to protect the Cuban people from a bloodbath.”

Suarez attended a demonstration in the Little Havana section of Miami, where hundreds had gathered outside the Cuban Versailles restaurant.

“Cubans are worthy and ready to rule themselves without tyranny. It can end today and it must end today. The implications of this moment can mean freedom for millions of people in the hemisphere, from Nicaraguans and Venezuelans and so many more,” the mayor said at a news conference.

“Now more than ever, the United States and the international community must support the Cuban people in their struggle for freedom,” they wrote in their statement.

Amid a resurgence of coronavirus cases associated with the arrival of the Delta variant of the virus, with health authorities reporting a record 6,923 cases and 47 deaths on Sunday, the island republic is suffering from the crippling fallout from US sanctions imposed by the administration of former president Donald Trump.

People have also been brought out into the streets over a worrying lack of food, medicine and other basic products.

​Thousands of Cubans, from Havana to Santiago, turned out for the Sunday protests, with the images going viral on social media.

A spate of broadcasts on social media showed hundreds of people marching through the streets of San Antonio de los Baños, Guira de Melena and Alquízar, all in the province of Artemisa, near Havana.

Diaz Canel addressed the island on Sunday in a televised speech to denounce what he called a “smear campaign” unleashed by the US, while urging Cubans to remain calm.

“We will not let anti-revolutionary mercenaries who are beholden to the American empire to create instability. There will be a revolutionary response,” he said in a televised address to the nation.

“We are calling on all Communists to take to the streets where these provocations are being staged and oppose them.”

The United States imposed trade restrictions on Cuba in the late 1950s in response to the communist revolution. Ex-US President Barack Obama took some minor steps towards normalizing relations with its neighbor, however the arrival of the Trump administration reversed many of those.

After President Joe Biden, who vowed to continue Obama’s policies, entered the White House, the Cuban Foreign Ministry had high hopes for restoring relations between the two countries, abruptly cut off under the Donald Trump administration.

© AP PHOTO / RAMON ESPINOSASoviet-era Lada cars flying Cuban flag drive past the American embassy during a rally calling for the end of the US blockade against the island nation in Havana, Cuba, Sunday, March 28, 2021

The latter had returned Cuba to the US list of state-supporters of terrorism.

However, Biden administration’s review of the US policy toward Cuba has not progressed over the past five months, ostensibly because of its current low priority for the White House, The Washington Post reported in June, citing anonymous sources.

On June 23, the United States voted against a UN General Assembly resolution condemning the embargo on Cuba that was adopted by the overwhelming majority of 184 other nations. Top Cuban diplomat, Minister of Foreign Affairs Bruno Rodriguez, underscored that political and ideological differences were not an “impediment to a respectful and civilized relationship” with neighbours. Rodriguez slammed the White House for making empty promises and seeing no progress.