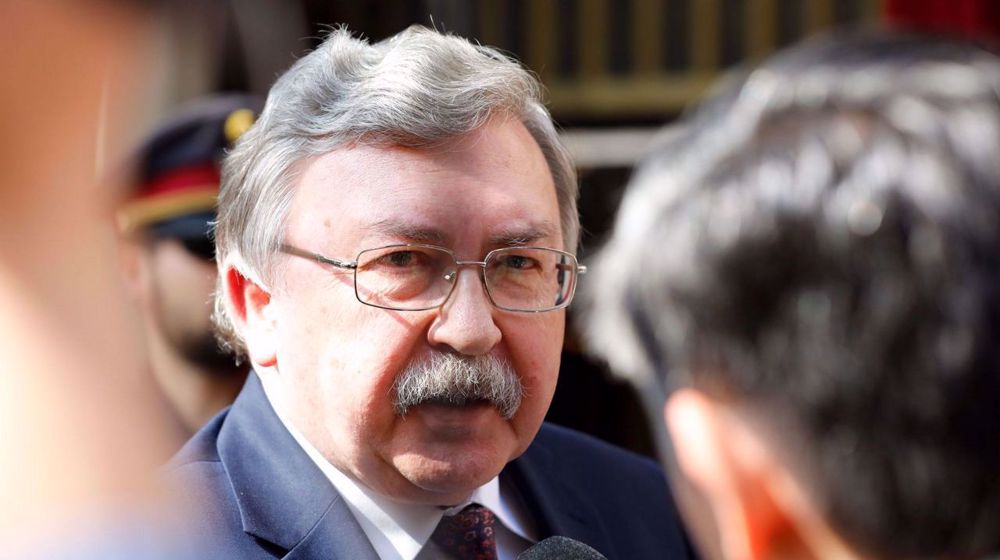 Russia’s permanent representative to international organizations in Vienna says Iran’s plan to enrich uranium metal is a direct outcome of the United States’ maximum pressure campaign against the country.

“In a first occasion for non-nuclear countries, Iran began enriching uranium to 60%. And now it’s about to start producing metal uranium enriched to 20%. I don’t think anyone in the US is happy about that, but that’s the direct consequence of the maximum pressure policy,” Mikhail Ulyanov said in an interview with Russian newspaper Kommersant on Sunday.

Ulyanov expressed hope that the Americans can learn from their past mistakes, which brought results that were the opposite of what they expected.

The Russian diplomat was referring to the US withdrawal from the Iran nuclear deal, also known as the JCPOA, in May 2018, in pursuit of the maximum pressure policy against Tehran. The withdrawal occurred under the administration of former US President Donald Trump, who was a vocal critic of the JCPOA, signed under his predecessor Barack Obama. In response, Iran used its rights under the 2015 agreement to retaliate by ramping up its nuclear activities in gradual steps, the latest of which was a plan to produce enriched uranium metal.Iran’s enriched uranium metal production serves peaceful purposes: Foreign MinistryIran asserts that its pending production of enriched uranium metal is in line with peaceful purposes.

Following Trump’s defeat in the 2020 presidential election, which saw Democrats return to the White House, the US showed interest in returning to the JCPOA, leading to negotiations between the parties to the accord in Vienna with the aim of bringing Washington back into compliance.

However, three months after the beginning of the Vienna talks, the US is still declining to remove all the sanctions that were imposed after the JCPOA went into effect in January 2016, and it has failed to provide assurances that it will not exit the deal again, while keeping the maximum pressure in place.

‘US should take first step’

According to Ulyanov, the first step towards the restoration of the nuclear agreement should be made by the US as the party that created the current obstacles in the path of the full implementation of the JCPOA.

“I can lay out Russia’s point of view: naturally, the first step is to be made by the Americans because it was them who started the whole thing when they withdrew from the deal and nearly wrecked it threatening the entire world with their extra-territorial sanctions,” he said.

Ulyanov, who leads the Russian delegation to the Vienna talks, said more than 90% of the work to restore the JCPOA is done, but there are politically sensitive matters in the remaining 10%.

He said although the participants have not agreed to a plan, the outlines of the potential agreement are “quite clear and everyone sees its conceptual frames. Everyone accepts them but details – who and what should do and when – are yet to be specified within these outlines.”Russia: No date set for new talks on JCPOA revival, Iran needs more time after presidential pollRussia says no time has been set for the next round of Vienna talks as Iran needs more time after its presidential poll.

The Russian envoy also said the next round of the talks, which were paused on June 20, is not likely to happen earlier than ten days, but voiced hope that the talks will resume as soon as possible.

“It is quite explainable: a new president has recently been elected in Iran, a new team is being formed and they need time to decide on their position. It is a hot-button matter for Iranian society and the establishment. Heated debates go on. So, no wonder,” he added.

Raeisi himself has also noted that Iran will not renege on its promises. Speaking at his first press conference after his victory, he urged the US to return to the JCPOA and comply with its commitments under the deal, saying the Iranian nation is not satisfied with the current state of the nuclear deal.