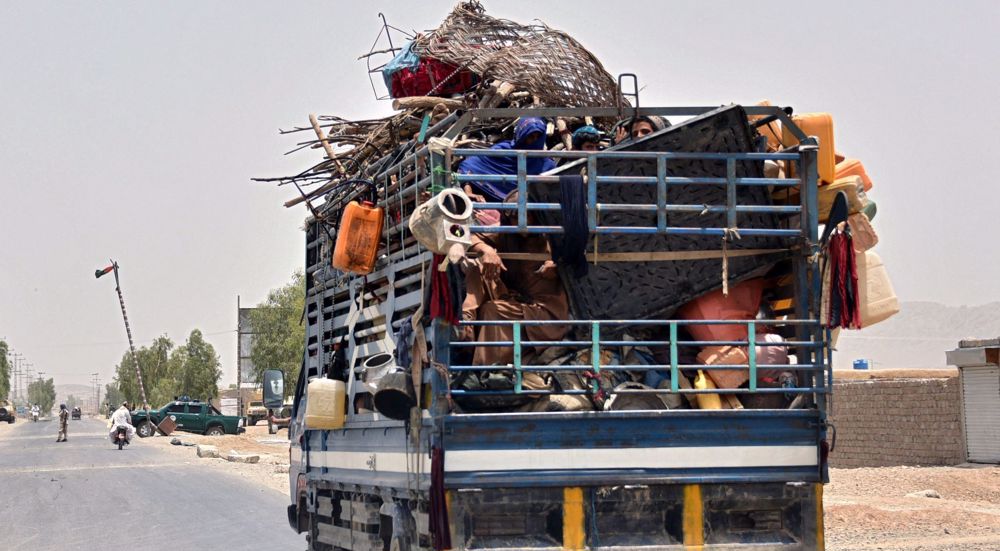 More than 12,000 Afghan families have fled their homes in the northern province of Kunduz as battle continues between the Taliban militant group and government forces to control the southern fringes of the provincial capital city, also called Kunduz, the acting governor says.

With gunfire that could be heard in the background, video footage showed on Monday Afghan forces on the battlefield on the outskirts of the city.

The displaced families living in tents in Kunduz city said they are suffering from severe lack of food and other relief.

“Our belongings are all burned, and we have nothing left,” said Javed Khan, a displaced Afghan man. “We live under this old tent and the sun.”

According to local reports, which could not be independently verified, Afghan forces and armed civilians in and around the provincial capital are resisting against Taliban militants who have already captured most districts in Kunduz province.

The Taliban’s recent territorial gains come as US-led foreign troops started to withdraw from Afghanistan after 20 years of war, leaving the task of pulling the country from a spiraling security crisis to local forces.

Since the US started the formal withdrawal of its forces from Afghanistan, in May — with a delay in a deadline agreed with the Taliban — the militants have intensified attacks across the country and, and according to the Pentagon, managed to take control of more than 100 of Afghanistan’s 419 district centers so far.

Najia Anwari, a spokesperson for Afghanistan’s Ministry for Peace Affairs, said on Saturday that “serious discussions are taking place between the Afghan Republic and the Taliban negotiators” in Doha.

As the Taliban make a fresh push to surround cities and gain territory, emboldened by the departure of foreign forces, officials said on Monday that the militants have surrounded the city of Ghazni in central Afghanistan, taking over civilians’ homes to fight security forces.

“The situation in Ghazni city is very critical…the Taliban use civilian houses as hideouts and fire upon the ANDSF (Afghan security forces), this makes the situation very difficult for the ANDSF to operate against the Taliban,” said Hassan Rezayi, a member of Ghazni’s provincial council.

US President Joe Biden has said the American troop pullout will conclude on August 31 after nearly 20 years of war on Afghanistan, ahead of the September 11 deadline.Taliban capture key district in southern Afghan province of KandaharThe Taliban capture another key district after fierce night-time fighting with Afghan forces in southern Kandahar province.

The US general leading the war in Afghanistan, Austin Miller, is to relinquish command on Monday, in a symbolic end to Washington’s longest conflict.

According to local officials, clashes between the Taliban and the government forces are also continuing in the southern province of Kandahar where the militant group traditionally has had a strong presence, locals said.

“Since the past four days, armed Taliban are attacking…Kandahar city from the western direction,” said Hamidzai Lalay, a former member of parliament who is fighting with armed men against the Taliban in Kandahar.

“Afghan security forces, including special forces, are fighting the Taliban and trying to push them back.”

A spokesman for the Ministry of Defense, Fawad Aman, said the situation in Kandahar was “completely under control of ANDSF” which had carried out air and ground operations in recent days.

The Taliban have so far failed to hold provincial capitals, but they have put pressure on Afghan security forces to respond to offensives around the country.

The Afghan security forces, with the help of airstrikes, on Sunday succeeded in repelling a Taliban assault on Taluqan, the provincial center of a key northern province bordering Tajikistan.