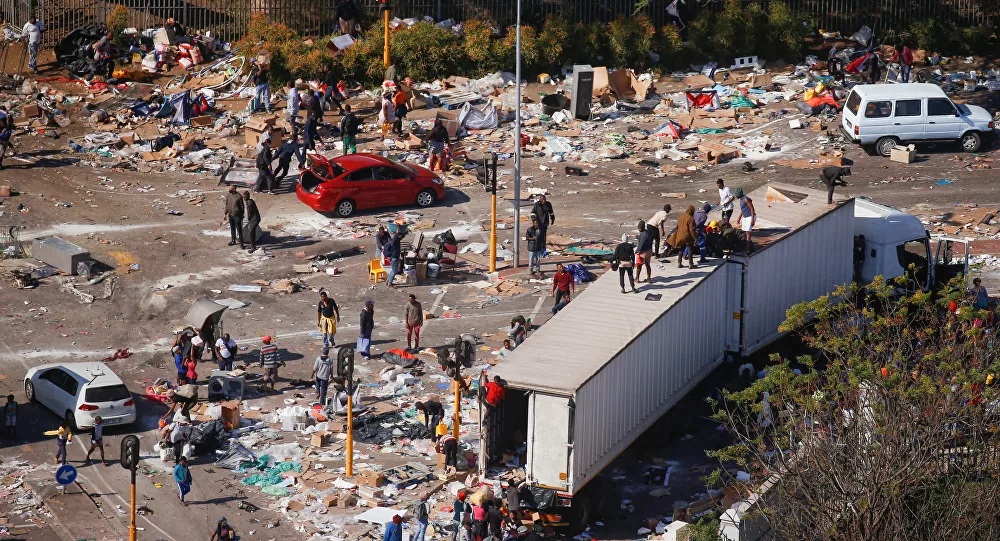 South Africa descended into chaos on Friday after protests ignited by the jailing of former President Jacob Zuma over skipping a corruption probe transformed into what has become the worst turmoil in the country in years.

A man in a police jacket has been caught red-handed by an angry mob in South Africa beside his car, packed with what appears to be looted goods, as the nation is hit by major unrest due to former President Jacob Zuma’s imprisonment, in addition to massive unemployment and a weak economy amid the coronavirus pandemic.

In a video of the incident, uploaded on Twitter, a variety of household supplies can be seen in the boot and interior of the vehicle, ranging from bread and cooking oil to rolls of toilet paper.

​Another video, shared by the same user, shows a second man, allegedly a cop in plain clothes, outside of his vehicle as the crowd took out the goods he had allegedly looted, including a TV set.

Shops in several cities across South Africa have been pillaged and set ablaze as the turmoil in the country continues to rage on, spreading to more provinces, including Mpumalanga and Northern Cape, according to the police.

Looting was also reported in the township of Soweto and the port city of Durban, prompting local vigilantes, disappointed by the government’s inaction, to take up arms to prevent further pillaging.

​Horrifying scenes of the damage caused by the ransacking have been shared online by users from various South African cities.

The African nation was hit by protests last Friday following the imprisonment of former President Jacob Zuma, who turned himself in on Wednesday to serve a 15-month sentence over contempt of court after skipping a corruption trial.

The protests quickly turned violent and ignited a massive tumult in the country, exacerbated by ongoing economic woes and unemployment stemming from the coronavirus pandemic.

The ensuing chaos and looting cost at least 72 people their lives, according to South African police.