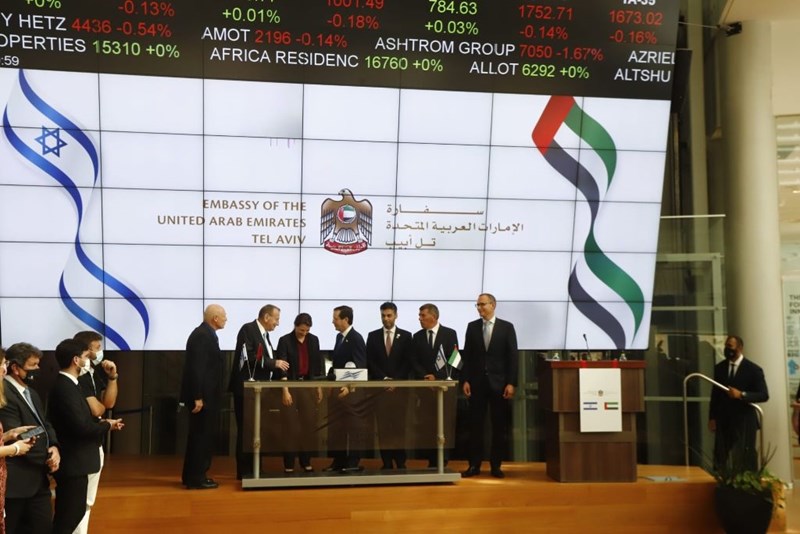 The UAE opens its embassy in ‘Tel Aviv’ with Israeli President Isaac Herzog attending the ceremony.

The most recent step towards normalization, the ‘Abraham Accords,’ paved the way for diplomatic relations between the UAE and the Israeli occupation. On Wednesday, the UAE inaugurates its embassy in ‘Tel Aviv,’ with Israeli President Isaac Herzog attending the ceremony.

According to Herzog, “Opening the embassy is an important milestone on our path to peace, prosperity, and security in the Middle East.”

“Witnessing the Emirati flag flying proudly in Tel Aviv might have seemed like a far-fetched dream about a year ago,” Herzog added, describing the opening as “an important milestone” in the relations between the two countries. The Israeli president also said that this ‘historic agreement’ should “extend to other countries that hope to make peace with Israel.”

Previously, UAE Ambassador to ‘Israel’ Mohamed Al Khaja said, “The UAE and Israel are very innovative countries, and we can harness this innovation to work for a more prosperous and sustainable future for our countries and region.”

In May, Al Khaja visited the Ashkenazi Chief Rabbi of ‘Israel’ and Sephardi Rabbi Shalom Cohen. He briefed them on the “situation of the Jewish community in the UAE and discussed several topics with them,” according to the Israeli ‘Kipa’ newspaper.

Al Khaja also visited the office of the Ashkenazi Chief Rabbi, officially invited him to the UAE, and told him about the “respect they have for him in the UAE.”

The UAE ambassador visited a leading Sephardi rabbi, Rabbi Shalom Cohen. During the visit, Shalom blessed the ambassador with a priestly blessing and talked about the ‘Abraham Accords’ with him.

This comes after the UAE and Bahrain signed normalization agreements with ‘Israel’ in the White House in September, with then-US President Donald Trump attending the ceremony.

The opening of the UAE embassy in ‘Israel’ comes after the Israeli Minister of Foreign Affairs Yair Lapid visited the UAE last month and the opening of an Israeli embassy and consulate in Dubai.

Lapid told UAE media that “bilateral trading between the two countries since September has exceeded $675.22 million,” pledging to continue developing the relations with the Arab World.

Palestinian Islamic Jihad spokesperson Tariq Salmi said, “History will record that while the occupation’s crimes in Jerusalem (occupied Al-Quds) are increasing in pace, demolishing homes and storming Al-Aqsa Mosque, the rulers of the UAE were opening their embassy to the occupation.”

“This embassy could’ve been built on the ruins of a house or land that belong to a Palestinian family that was displaced or killed during the 1948 Nakba,” Salmi said, adding, “Normalization and alliance with the enemy will be treason and a crime no matter how propaganda sources try to justify the normalization, and no matter how the normalizers try to conceal the truth.”

A member of the Fatah Central Committee, Abbas Zaki, said: “Mohammed bin Zayed is a traitor, and the UAE must be expelled from the Arab League.”