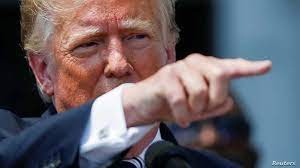 A new book by two Washington Post reporters, detailing the last year of Trump’s presidency, has made explosive claims that military top brass feared the president could instigate a coup if he lost the 2020 presidential race.

Former US President Donald Trump has rejected fresh allegations that he planned a coup in the US if the 2020 presidential election went in Joe Biden’s favour.

“Despite massive Voter Fraud and Irregularities during the 2020 Presidential Election Scam, that we are now seeing play out in very big and important States, I never threatened, or spoke about, to anyone, a coup of our Government,” the former president wrote on Telegram.

Trump mocked the chairman of the Joint Chiefs of Staff, General Mark Milley, who reportedly made the allegations. He said that Milley would be the last person he would stage a coup with if he ever wanted to go through with it, although emphasising that he has never had such intentions as he is “not into coups”.https://t.me/real_DonaldJTrump/13746?embed=1

CNN earlier published excerpts from the forthcoming book ‘I Alone Can Fix It’, by Washington Post reporters Carol Leonnig and Philip Rucker, which claimed that Milley and other top rank military officials made informal plans to oppose attempts by Trump and his allies to stage a coup.

“They may try, but they’re not going to f****** succeed,” Milley reportedly told officers.

The 45th US President has been outspoken in his criticism of the presidential vote results that he believed were “stolen from him”.