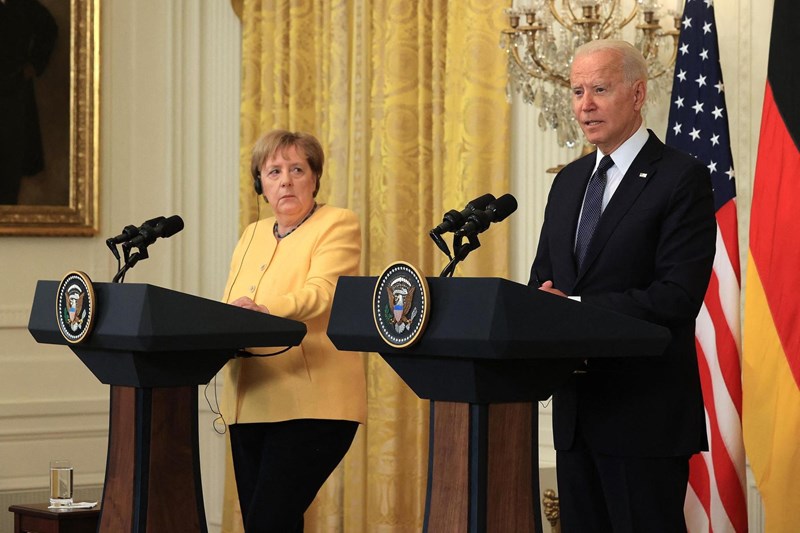 United States President Joe Biden and German Chancellor Angela Merkel made remarks during a press conference held at the White House as they were discussing a range of issues. Most importantly, the two top officials failed to reach an agreement on Nord Stream 2 natural gas pipeline, saying that they ‘came to different assessments as to what this project entails.’

US President Joe Biden said, “We will stand up for democratic principles and universal rights when we see China or any other country working to undermine free and open societies.”

“The Chinese government is not keeping its commitment that it made how it would deal with Hong Kong,” said President Biden.

German Chancellor Angela Merkel said that she and President Biden talked about “the many facets of cooperation and also of competition with China, be it in the economic area, be it on climate protection, be it in the military sector and on security.”

“There is a lot of common understanding that China, in many areas, is our competitor; trade with China needs to rest on the assumption that we have a level playing field so that we all play by the same rules, have the same standards,” added Merkel.

Joe Biden said that Germany and the United States are “launching a climate and energy partnership to support energy security and the development of sustainable energy, sustainable energy technologies, and emerging economies, including in Central Europe and Ukraine.”

Biden added that for the two officials to unite their efforts to upend on the global climate ambitions that they have to ‘up-the-ante,’ they “talked about when Paris Accord was set, we thought we had established just how serious it was, but things have gotten much more dire since even that date.”

The US President said that he and the German Chancellor “are absolutely united in our conviction that Russia must not be allowed to use energy as a weapon to coerce or threaten its neighbors.”

Biden also said that “The Chancellor and I have asked our teams to look at practical measures we could take together, and whether or not Europe energy security and Ukraine security are actually strengthened or weakened based on Russian actions.”

Chancellor Merkel said, “Our idea is and remains that Ukraine remains a transit country for natural gas; that Ukraine, just as any other country in the world, has a right to territorial sovereignty, which is why we’ve become engaged and continue to be engaged in the Minsk Process.”

The United States President said that “Sending American forces into Haiti is not on the agenda at this moment,” answering a question apropos the circumstances under which the US would send troops to Haiti.

“With regard to whether the circumstances in which we would send military troops to Haiti: We’re only sending American Marines to our embassy to make sure that they are secure and nothing is out of whack at all,” he continued.

Biden said, after criticizing the sovereign Cuban state, “There are a number of things that we would consider doing to help the people of Cuba […] for example, the ability to send remittances back to Cuba.”

He expressed the United States’ preparedness to give ‘significant amounts of vaccine’ to Cuba “If, in fact, I was assured an international organization would administer those vaccines and do it in a way that average citizens would have access to those vaccines.”

“One of the things that you did not ask but we’re considering is — they’ve cut off access to the Internet. We’re considering whether we have the technological ability to reinstate that access,” added Biden.

President Biden addressed the Nord Stream 2 natural gas pipeline, saying, “My view on Nord Stream 2 has been known for some time. Good friends can disagree. But by the time I became President, it was 90% completed. And imposing sanctions did not seem to make any sense.”

In February, Ned Price, the Spokesman for the United States Department of State, said that “The United States will continue to work with our allies and our partners to ensure Europe has a reliable, diversified energy supply that does not undermine collective security.”

“When it comes to potential punitive measures, including sanctions against Russian authorities, you heard me say yesterday that it doesn’t do us any favors to forecast potential targets or even really authorities under which we might enact additional sanctions,” Price added.

Nord Stream 2 is a pipeline to transport Russian gas to Germany via the Baltic Sea, with an estimated annual capacity of 55 billion cubic meters.