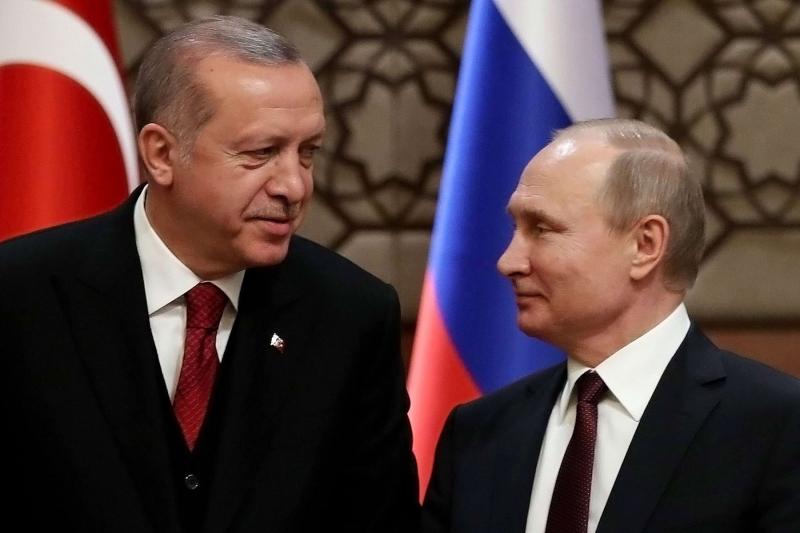 The former Al Qaeda affiliate in Syria, Hayat Tahrir al-Sham (HTS) is heavily armed, and has depended on the aid corridor for fresh ammunitions, weapons, fighters and military hardware. Their food and basic living supplies are all taken care of by the many international charities who keep the Idlib population better supplied than the rest of the Syrians.

Russia has continued to oppose increased humanitarian corridors at the UN with the aim at decreasing the supply of weapons to HTS.

Russia and Turkey had come to an agreement which was a de-escalation zone along the M4 highway connecting the port of Latakia to the industrial city of Aleppo.  Turkey was to supposed to control HTS and prevent them from attacking Russia safe-keeping patrols along the highway which would allow for the free movement of people, and cargo trucks from the Port to Aleppo.  However, Turkey was unwilling to hold up their end of the bargain and allowed HTS to attack the Russians and all others along the M4.

Turkey and Russia have shared interests in many areas, but Syria is not one of them.  They stand on opposite sides.  Erdogan backs the terrorists following Radical Islam, which is his AKP party platform as well.

Many experts feel that Russia is now willing to face Turkey militarily in Idlib, as the battle looms to take back the area, and free the population from the occupation of terrorists.

In Astana, and Geneva, the UN diplomates stress the need for a political solution, just as Secretary of State John Kerry said a decade ago.  The words are dead, just as so many innocent people have died in a decade of war.  There is no political solution waiting in the wings. The US-NATO war on the Syrian people, waged to force ‘regime change’ down their throats, never had a political solution planned.  The US backed FSA were supposed to win their war militarily, by defeating the Syrian Arab Army and destroying the Syrian infrastructure.  The FSA succeeded in destroying the infrastructure: places like water supply centers, electric power generators, schools, universities and hospitals.

The 16th International Meeting on Syria in the Astana format was held July 7 and 8 with the participation of the guarantor states (Iran, Russia, Turkey), the Syrian government, and the Syrian armed opposition.  The process seems unproductive, and some experts see it as a chance to travel, and nothing more.

The Syrian government holds control of the vast majority of Syrian territory. The armed opposition are in control of only Idlib, and are the former Al Qaeda affiliate in Syria.  The group known as HTS were fighting alongside ISIS in many battles, and have the very same political platform and agenda as ISIS.  The US and EU have a stanch rule: never negotiate with terrorists. However, in the case of Syria, the US, EU, and UN demand that the Syrian government negotiate face to face with terrorists following Radical Islam, which is the ideology that French President Macron has vowed to wage war on.

President Erdogan of Turkey has promised to send troops to Afghanistan to secure the international airport, following the US withdrawal.  US President Joe Biden personally asked Erdogan for his help.

Erdogan will be sending his mercenaries, the Free Syrian Army (FSA). Since 2011, Erdogan has backed the FSA and established their base of operations in Southern Turkey.  This was done at the behest of the CIA, who had the  “Timber Sycamore” operations headquarter in Southern Turkey.  The weapons were brought in from Libya to the nearby port of Iskenderun, and then trucked to Syria using Turkish military transport vehicles, and in at least one case the UN World Food Program trucks.

Erdogan has sent the FSA to fight in Libya in 2021 on the side of the Muslim Brotherhood regime there, which had been backed by the UN.

Edogan also sent the FSA to Azerbaijan in 2020 to fight against Armenia in their conflict.  Turkey has a long and bloody history involving the genocide of 1.5 million Armenians in 1916, the 2014 attack and occupation of the Syrian Armenian village of Kessab, and the Turkish involvement against Armenia in 2020.

The US had used terrorists to fight in Syria from their headquarters in Turkey, and now Biden is asking Erdogan to send the same terrorist group from Turkey to Afghanistan. Neither the US, nor Turkey have stopped their tactical use of armed terrorists following Radical Islam.  Biden was the right hand of Obama, who was the architect of the war waged on the Syrian people to force ‘regime change’.  After ten years of war, the Biden-Erdogan partnership remains, but their goal of establishing a Muslim Brotherhood seat of power in Damascus was unrealized.  The US leaves Afghanistan in defeat, and they will leave their occupation of Iraq and Syria in defeat as well.