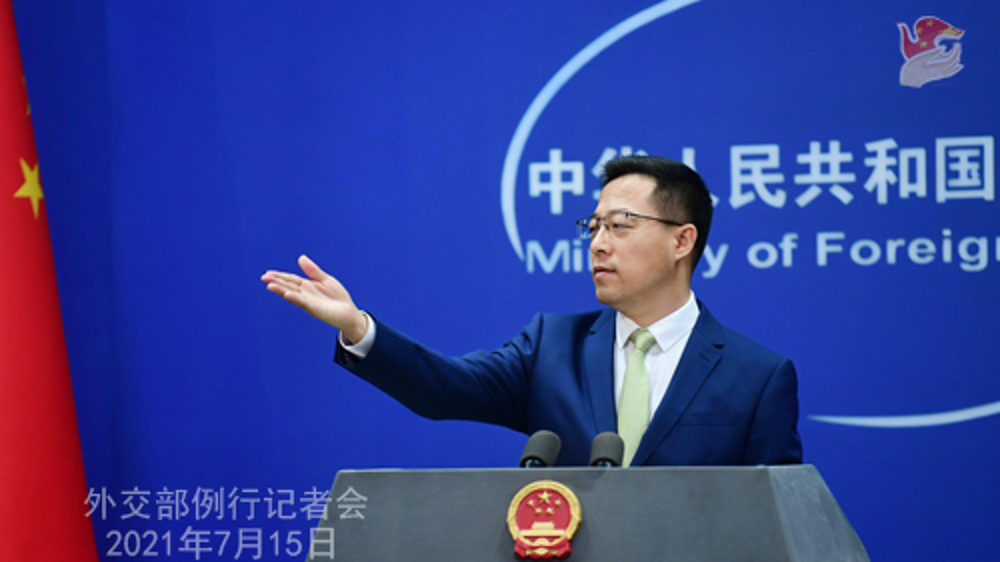 China says the United States is required to take “concrete actions” and completely lift its illegal and unilateral sanctions against Iran in order to return to the 2015 multilateral nuclear deal.

Chinese Foreign Ministry Spokesman Zhao Lijian made the remarks during his regular press conference on Thursday in response to a question about Beijing’s view on the prospect of the nuclear deal, officially known as the Joint Comprehensive Plan of Action (JCPOA), on the sixth anniversary of its conclusion and amid negotiations in Vienna to revive the agreement, which was abandoned by the US in 2018.

“China welcomes the fact that the US seeks to return to the JCPOA. In the meantime, the US side needs to show sincerity by taking concrete actions to regain the trust of the international community.”

He added that the Vienna talks have entered the final stage with all parties showing their “political will to reach an agreement” but the remaining differences should be bridged.

“The US should make an early decision to comprehensively and completely lift its illegal unilateral sanctions against Iran and third parties, while Iran should fully resume its compliance on this basis,” the Chinese diplomat pointed out.

The Vienna talks began in early April with the aim of reviving the JCPOA by bringing all original parties, especially the US, back into compliance with the deal, three years after Washington withdrew from the accord and tried to sabotage it.

So far, six rounds of negotiations have been held in the Austrian capital, as a result of which, according to participants, “significant progress” has been made in the course of the “constructive” and “businesslike” talks.

However, disagreements have persisted over a number of issues, including how to sequence the US sanctions removal, with Tehran arguing that since Washington was the party that violated the terms of the agreement, it should take the first step back into compliance with the deal by removing its unilateral sanctions.

Tehran has also asked for guarantees that the US won’t again leave the JCPOA under a new administration. This comes as the other hand, the administration of President Joe Biden says it cannot give such guarantees.

Iran is also dissatisfied with the scope of sanctions that the US is willing to remove, saying the US sanctions removal must cover all the sanctions that were slapped on the Islamic Republic after the JCPOA went into force in January 2016.

The US, for its part, has asked for follow-on talks about other issues, such as Iran’s missile program, which Tehran has strongly rejected.

Iran’s Deputy Foreign Minister and top negotiator to Vienna talks Abbas Araqchi said late last month that Tehran has already made its tough decision to save the agreement and it is now time for the other parties to act similarly for the accord.

“The Islamic Republic of Iran has already made its tough decision. When the United States quit the JCPOA and Iran decided to stay in it, this was Iran’s big and tough decision, which has kept the JCPOA alive up to the present,” Araqchi said.

Elsewhere in his presser, Zhao described the JCPOA as an important outcome of multilateral diplomacy which was achieved after 13 years of painstaking negotiations and endorsed by the UN Security Council Resolution 2231

He said the nuclear deal is a “classic example of resolving disputes through dialogue and consultation, and a key pillar for upholding the international non-proliferation regime and promoting peace and stability in the Middle East.”

He stressed the importance of making joint efforts to safeguard and implement the JCPOA as a means to serve the common interests of the international community.

He emphasized that the full and effective implementation of the JCPOA is the “only effective way to resolve the Iranian nuclear issue.”

The Chinese spokesperson said his country, as an important party to the JCPOA, is firmly committed to upholding the authority and effectiveness of the deal and the Security Council Resolution 2231, and playing a constructive role in the Vienna negotiations.

He added that Beijing would make efforts to work on all parties to build consensus, resolve differences and bring the JCPOA back on the right track at an early date.

“No matter how the situation may change, China will always stand on the right side of history, uphold justice, advance the political settlement of the Iranian nuclear issue through diplomatic means, and safeguard the international non-proliferation regime and peace and stability in the Middle East,” Zhao said.