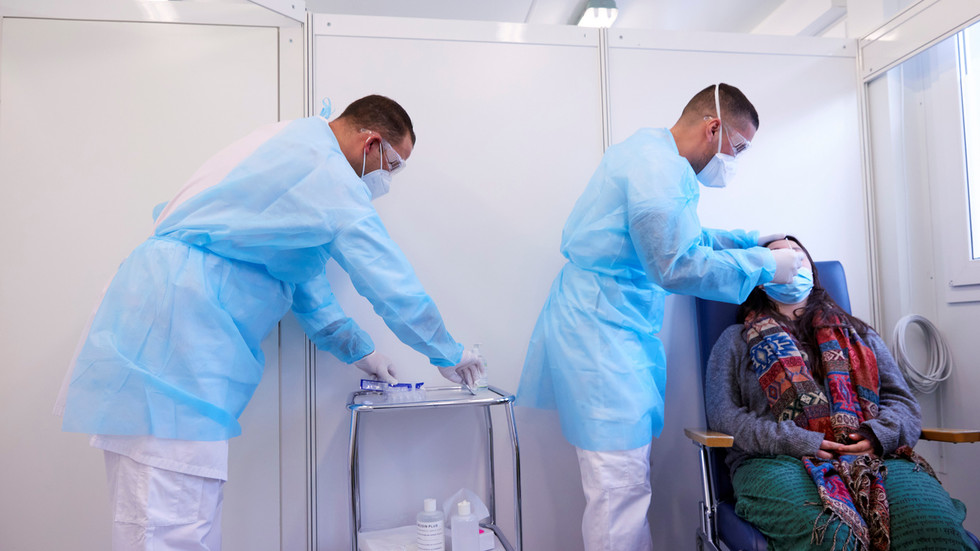 Healthcare workers should don some form of label identifying their Covid vaccination status, the head of Switzerland’s centrist Green Liberal Party has argued, while stressing that inoculation should remain voluntary.

Swiss politicians have begun to explore ways to “incentivize” vaccine uptake, citing a decrease in the number of people lining up for the shot. Around 43% of Switzerland’s population is fully vaccinated, while 52% have received at least one dose of the drug. However, it appears the other half of the country is not in any rush to roll up its sleeves.

Juerg Grossen, president of the Green Liberals, told local media that while compulsory vaccination may not be feasible, other methods can be used in an attempt to reduce Covid-19 transmission, particularly in the country’s hospitals. According to local news outlet nau.ch, Grossen thinks that people working in hospitals, nursing homes, and similar facilities should be labeled differently based on their vaccination status – perhaps with a “sticker.” He argued that such a scheme would make sense in public institutions where individuals may be at risk of infection.

Although in favor of making healthcare workers show their vaccination status, he said he was opposed to forcing them to get the shot, insisting that coercion is “not exactly the Swiss way.” The lawmaker also warned that making Covid vaccination a requirement to work in the health sector would have devastating consequences.

“If all the unvaccinated in the healthcare sector have to quit work – then good night,” Grossen said, suggesting that a large number of medical workers in the country remain unjabbed.

His opposition to compulsory vaccination was echoed by other Swiss politicians, who had their own ideas about how to increase enthusiasm for the public inoculation campaign.

Ruth Humbel, president of the Federal Assembly’s Health Commission, told local media that a compulsory vaccination policy similar to the one introduced in neighboring France would “not be enforceable.” Instead, she suggested that those who choose to remain unvaccinated should be treated differently by the healthcare system should there be another “wave” of the virus.

“If the hospitals were again used, the unvaccinated Covid patient would have to stand back,” she said.

With France set to introduce a highly divisive scheme requiring proof of vaccination or negative Covid status for many routine activities, neighboring Switzerland has begun to debate the merits of adopting similarly aggressive measures. The country already has a digital Covid certificate system, but it’s only required in certain situations, such as in order to attend a large concert. Grossen has suggested that the health ID should become mandatory for smaller venues in order to push more of his countrymen to get vaccinated, particularly young people.

Over the past several months, some activists in the UK, US, and elsewhere who have protested against coercive vaccination programs and other Covid measures have been spotted wearing Star of David patches and other markings as a way to highlight the discriminatory nature of such policies. The practice has been widely criticized as extreme.