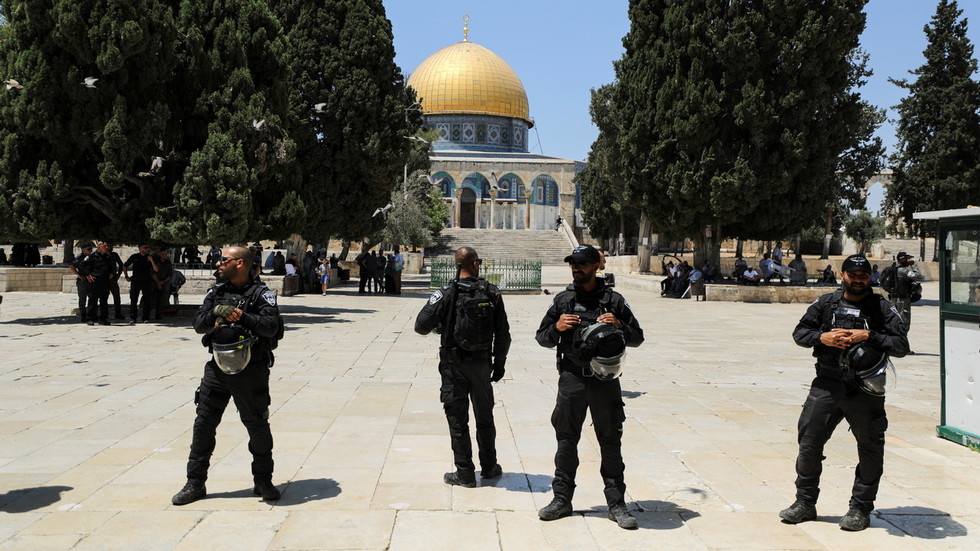 After PM Naftali Bennett stoked tensions by saying Jews and Muslims had “freedom to worship” at Jerusalem’s holy site housing al-Aqsa mosque, his office has claimed that he meant both groups had “freedom of visitation rights.”

The mosque, which is considered the third holiest shrine in Islam, is located in a place known as the Temple Mount to Israelis and Haram al-Sharif to Palestinians.

According to the decades-old status quo, non-Muslims are forbidden to pray at the flashpoint compound located in the Old City – which is regarded as the holiest site in Judaism.

Fresh clashes between Palestinians and Israeli security forces erupted at the compound on Sunday as a group of over 1,600 Jews arrived to mark Tisha B’Av, a day of fasting to commemorate the destruction of Jewish temples thought to have stood at the site.

Ahead of the arrival of the group – which included right-wing lawmakers from Bennett’s party, police had raided the compound and forcibly evacuated Muslim pilgrims. Some reportedly threw stones at the police who fired stun grenades and tear gas at them. A few in the crowd reportedly chanted: “With spirit, with blood, we’ll redeem Al-Aqsa.”

In a statement issued following the clashes, Bennett thanked the country’s public security minister and police chief for “managing the events… with responsibility and consideration” and for “maintaining freedom of worship for Jews on the Mount.”

The statement also “emphasized that freedom of worship on the Temple Mount will be fully preserved for Muslims as well, who will soon be marking the fast of the Day of Arafah and the Eid al-Adha.” The incident occurred ahead of the major Eid al-Adha festival and on the eve of the annual Hajj pilgrimage.

However, the Prime Minister’s Office (PMO) on Monday backtracked on Bennett’s comments. The PMO told the Army Radio network that Bennett had misspoken and that the status quo would remain in place at the shrine. It said the PM had meant both Jews and Muslims have “freedom of visitation rights.”

In an interview with the Channel 13 network on Sunday, Public Security Minister Omer Bar-Lev said it was “certainly against the law” for Jews to pray at the site. He claimed “the wording was off” in Bennett’s statement and said the PM had meant to highlight the “freedom of movement” for Jews to the site on Sunday despite “all the complexities.”

Permitting Jewish worshipers at the shrine would be a major shift in the status quo that has existed since Israel captured the Old City of Jerusalem from Jordan during the Six-Day War in 1967.

In a statement carried by the Palestinian news agency Wafa, the Jerusalem Islamic Waqf Council, which is the religious authority in the compound, condemned the “violations and attacks” perpetrated by “Jewish fanatic groups, with the support and political cover of the Israeli government.”

It claimed Israel’s actions “reveal extremism and malice” and could lead to a “religious war,” the “consequences [of which] cannot be contained.”

Jordan, Turkey, Egypt and the Organization of Islamic Cooperation issued angry reactions on Sunday as news broke of the clashes and the arrival of Jewish worshipers at the compound.

The Islamist Ra’am party, a member of Bennett’s governing coalition, denounced the visit by Jewish “settlers” to the shrine, which it said is “solely the property of Muslims.” The party warned that the repercussions could “inflame the situation in Jerusalem and the entire region, leading to a catastrophic religious war.”

The Palestinian Authority (PA), which governs parts of the occupied West Bank, said in a statement said the “Israeli incursion in the Al-Aqsa mosque complex in occupied Jerusalem” was a “serious threat to security and stability.”

US planning attack on civilians to blame Syrian army: Russia