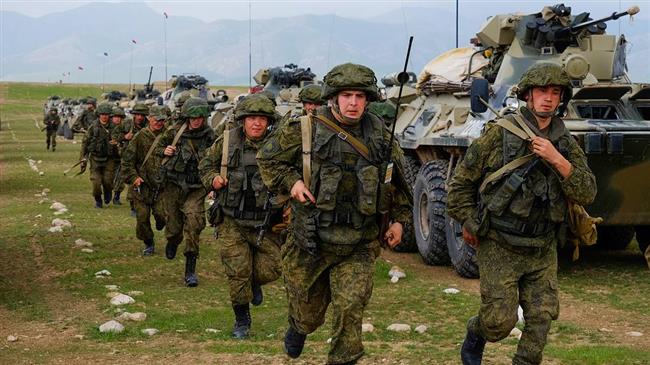 Russia, Uzbekistan and Tajikistan are set to hold military drills next month near the border with Afghanistan where the Taliban militant group has over the past weeks ramped up attacks against government forces.

The Russian Defense Ministry said in a statement on Monday that the joint drills would take place from August 5 to 10 at the Kharbmaidon training ground in Tajikistan.

Troops from a Russian military base in Tajikistan and Russia’s Central Military District will take part in the war games, the ministry stated.

“In early August, we will take part in a joint exercise that will involve military contingents of the armed forces of the republics of Tajikistan and Uzbekistan at the Kharbmaidon practice range,” Lapin said.

“In the course of the drills, we will practice preparations for combat operations by a grouping of forces to rout outlawed armed gangs that have intruded into the territory of an allied state,” he underlined.

The commander did not elaborate on the strength of the troops that would be engaged in the drills.

The Taliban claims to be in control of more than half of the entire Afghan districts, several border crossings, and has laid siege to a string of provincial capitals.

Earlier in the day, Russia censured the US mission in Afghanistan as a “failure” and blamed the withdrawal of foreign forces for the war-torn country’s rapidly deteriorating stability.

Russian Foreign Ministry spokeswoman Maria Zakharova disputed the assertion made by US officials that the drawdown in Afghanistan is “a logical completion” of military operations there, saying, “It is not a logical completion; It is a failure.”

The militant group claims it now holds 85 percent of Afghanistan, controlling about 250 of the country’s nearly 400 districts, a declaration government officials dismiss as part of a propaganda campaign.

The US invaded Afghanistan in October 2001 under the pretext of the so-called war against terror.

Washington has spent trillions of dollars in the war, which has left hundreds of thousands of Afghans dead.

In another development on the same day, more than a dozen diplomatic missions in Afghanistan called for “an urgent end” to the Taliban’s offensive, saying it was at odds with claims that they want a negotiated settlement to the conflict.

“The Taliban’s offensive is in direct contradiction to their claim to support a negotiated settlement,” the missions said in a statement, adding, “It has resulted in loss of innocent Afghan lives, including through continued targeted killings, displacement of the civilian population, looting and burning of buildings, destruction of vital infrastructure, and damage to communication networks.”

The diplomatic missions said, “The Taliban should lay down their weapons for good and show the world their commitment to the peace process.”

The statement came after a delegation of high-ranking officials from Kabul held talks with the militant group’s political leadership in the Qatari capital over the past two days.

Separately, Turkish President Recep Tayyip Erdogan said on Monday that the Taliban should “end the occupation,” and promote peace efforts.

“The Taliban need to end the occupation of their brothers’ soil and show the world that peace is prevailing in Afghanistan right away,” he said.

Erdogan also played down a warning from the militant group of consequences if Turkish troops remain in Afghanistan to run the Kabul airport.

Erdogan said Turkey, which currently has about 600 troops in Afghanistan as a NATO member, was planning to hold talks with the Taliban over the militant group’s refusal to let Ankara run the airport after the US troops withdraw.

“God willing, we will see what kind of talks we will have with the Taliban and see where these talks take us,” the Turkish president told journalists in Istanbul.

Ankara, which has offered to run and guard the Kabul airport after NATO withdraws, has been in talks with the United States on financial, political and logistical support for the deployment.