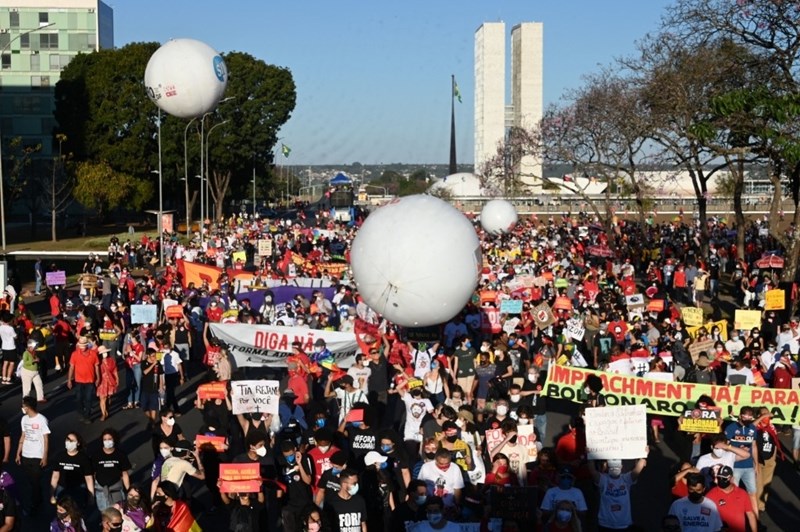 Tens of thousands of Brazilian protestors took to the streets in several Brazilian cities on Saturday to demand Brazilian President Jair Bolsonaro’s impeachment, as the pandemic exacts a disturbing toll, according to AFP.

It was the fourth weekend of anti-Bolsonaro protests organized by leftist political parties, labor unions, and social groups. Bolsonaro is being investigated in the senate, which is probing the possibility of corruption tied to the purchase of coronavirus vaccine.

In Rio de Janeiro, thousands of Brazilians dressed in red and wearing face masks marched with banners bearing slogans such as “No one can take any more” and “Get out corrupt criminal.”

Organizers called for nationwide protests “in defense of democracy and the lives of Brazilians and the removal of Bolsonaro” from power.

In the afternoon, the local press reported that demonstrations took place in 20 out of 26 Brazilian states.

Furthermore, it is suspected that the Brazilian president ignored corruption suspicions raised by a Ministry of Health employee. When this employee testified before a Senate investigation committee, he stated that he was subjected to “extraordinary pressure” to approve the import of inflated doses of the Indian “Cofaxin” vaccine.

The Brazilian Public Prosecutor’s Office publicized the start of a preliminary investigation into the charges leveled against the president by three senators, who accused him of “breaching his duties” in this case.

Bolsonaro, who took office in 2019, denied all allegations of government corruption and condemned the parliamentary investigation, calling it a political “movement” aimed at forcing him to resign.

The Brazilian President’s approval rating has fallen to 24%, and opinion polls suggest he will lose the presidential election in October to former leftist President Luiz Inacio Lula da Silva of the Labor Party, who supported Saturday’s protests.

On June 30, the opposition filed a complaint outlining 20 different charges for the president’s impeachment, but Bolsonaro still has enough support in Congress to prevent such moves.