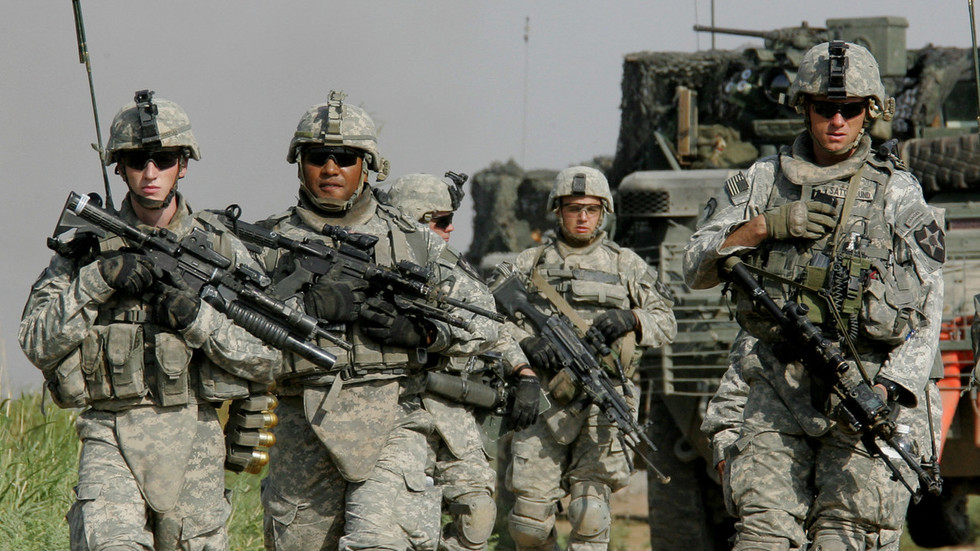 Washington’s agreement to cease ‘direct fighting’ is a long way from a troop withdrawal. The reality is, America has no intention of pulling out of Iraq anytime soon as it is far too important to their real aim of containing Iran.

Iraq is a nation steeped in American controversy, epitomising the country’s catastrophic 21st century obsession with ‘regime change’. One wonders when America will cut its losses and leave the Middle East nation alone. Recently, there’s been some hope they might withdraw, with the Biden administration appearing to sympathise with the growing political sentiment against ‘forever wars’. Following a visit by Iraqi Prime Minister Mustafa al-Kadhimi to DC, Washington and Baghdad on Monday signed a deal to “end” the US combat mission in Iraq by the end of this year. But, as ever with American military intervention, many questions still remain.

The devil, of course, is in the details. The headline sounds great, but actually US forces won’t leave the country and don’t commit to either. They simply cease directly “fighting” ISIS and “remain” in an advisory capacity. The White House refused to comment on any potential “troop withdrawals” accordingly. If it wasn’t obvious, the Iraqi government have been wanting America out for a long time and its parliament even passed a motion to do so following the assassination of Iranian General Qassem Soleimani last year, but Washington refused to budge, with Trump pushing threats of sanctions. But it’s not like they were ever invited in the first place. One must question accordingly, does this deal actually mean anything at all? Are we going to keep pretending ISIS is the real reason America is there? And given the US happily uses its own capabilities within Iraq to attack Iranian targets at will, what is changing here?

Anyone pretending that America’s lingering and unwanted presence in Iraq is an act of altruism and benevolence dedicated solely to counter-terrorism is deluded. The 30-year history of its contemporary role in the country which involved two outright wars, the latter an illegal invasion, glaringly suggests otherwise. The existing façade that they are there to “defeat ISIS” is a painfully out-of-date distraction, not least when the rise of ISIS was a consequence of America’s intervention in the country in the first place. The real reason the US is there is simply to contain Iran.

The mainstream media have largely reacted to this deal claiming that a US withdrawal could expand “Iranian influence” in the country and over Iraq’s government, as if it is just Tehran that wants the “Americans out” as opposed to it being an authentic sentiment within the country. Yet this is a dishonest interpretation of events. Anyone who knows Middle East politics in detail will see that Iran is not exercising “malign influence” over Iraq, but the two countries have a natural affinity for each other on the fact they are both majority Shi’ia Muslim nations and are linked by history. It is ironic on behalf of the US that when Saddam Hussein was in Baghdad, he led a Sunni minority dictatorship who sought to play down sectarianism through wielding secular Arabist nationalism. He even went to the desperate length of going to war against Iran to thwart the Islamic revolution’s influence on his country after 1979.

This reveals the biggest problem with what America has done to Iraq, underscoring its brainless approach to the rejection and an obsession with getting the best of both worlds. By illegally invading Iraq, dumping Saddam’s Ba’athist regime and striving to build a utopian democratic project in its own image, Washington gifted the Shi’ia majority control of the country. They then naturally choose to pursue a closer sectarian and economic relationship with Iran. This brought about religious conflict, triggering the rise of ISIS out of Al-Qaeda, as disgruntled Sunni resistance forces found traction in the country’s poorer north. Iraq remains a chronically unstable country and America is part of the problem.

Yet despite the sectarian strife and the instability that continues to place Iraq in turmoil, both Sunnis and Shi’ias are united in their wish to simply see the US leave. It is only the Kurds in the North, who see the US presence as a route to securing their autonomy, who want the Americans to remain. The United States has already long overstayed its ‘welcome’. Its presence in Iraq is an occupation, one which the sovereign government has no leverage to reverse. It lingers there not because there is a mission to defeat terrorism, but because the US wants to maintain an unlimited right to bomb Iranian targets and militias as part of its regional proxy conflict against Tehran.

This is an unjust arrangement, with Washington believing it has more of a right to be an intruding presence in Baghdad than Tehran itself does. What we see here is a face-saving deal to supplement an Iraqi prime minister who is suffering under widespread anti-American pressure and frequent social unrest. But there is no substance to the deal, the US doesn’t really commit to anything, only saying it will stop fighting a terrorist force long since defeated. It’s not an exit, it’s simply window dressing and doesn’t alter the reality that the United States maintains an unwanted presence in Iraq and will continue to use it how it sees fit.

Biden talks the talk on withdrawing from various Middle East conflicts, but there are serious questions concerning whether he will ever actually live up to it in practice.