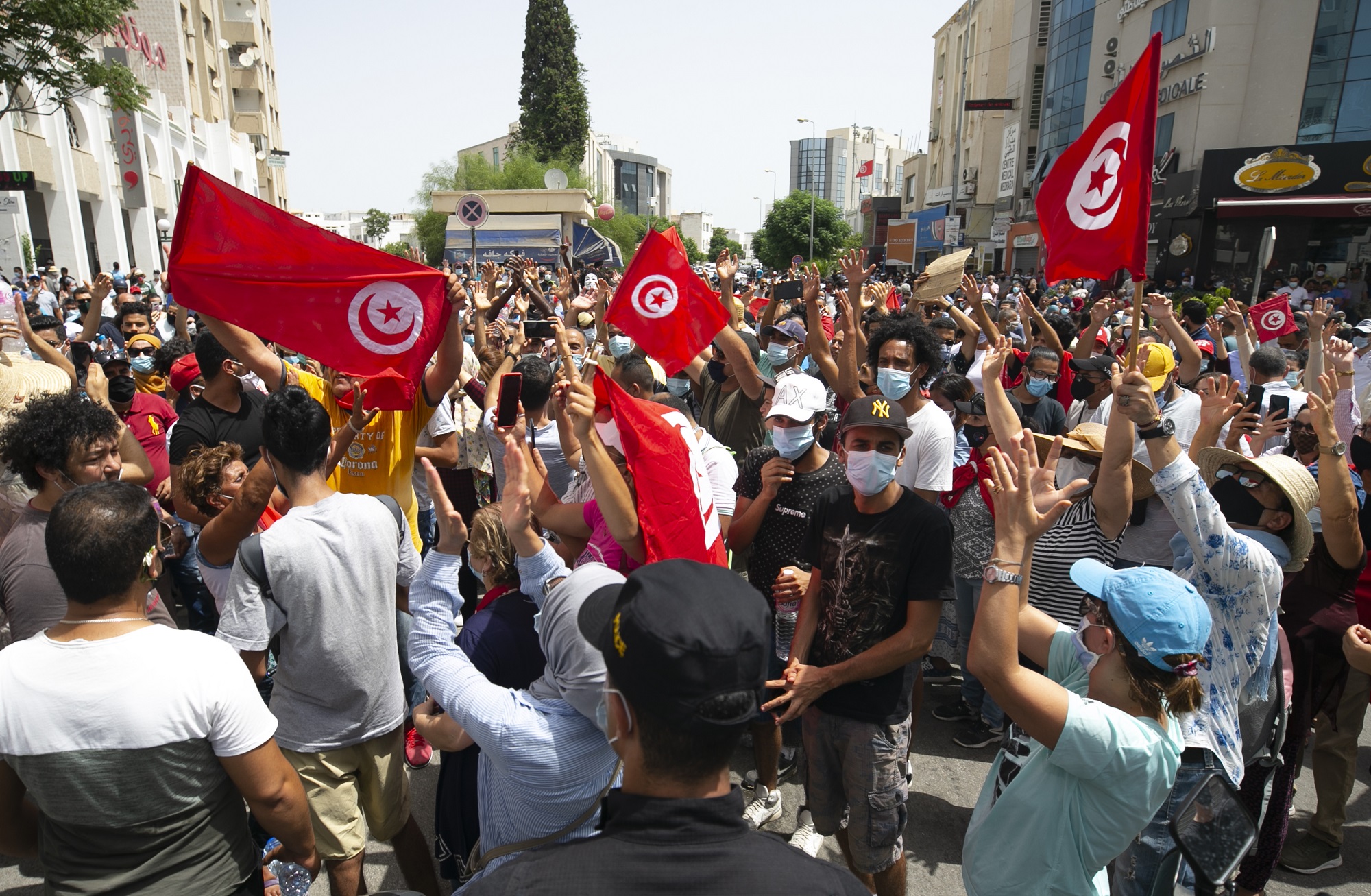 The only democracy to emerge from the Arab Spring in 2011 is going through a process of strategic correction. Tunisian President Kais Saied announced late Sunday he was firing the prime minster, Hichem Mechichi, dismissing the parliament, and assuming executive authority under Article 80 of the constitution.  The speaker of Parliament, Rachid Ghannouchi, declared the actions amounted to a coup.

Saied announced that he was assuming the public prosecutor’s powers and stripping lawmakers of immunity, while assuring Tunisian rights groups on Monday that he remains committed to civil liberties and the democratic process, and that the changes will be temporary.

The crisis stems partly from an economy which never improved, and the COVID pandemic which has hit Tunisia hard.  The main cause of the crisis is a political power struggle between Saied, Mechichi and Ghannouchi which has split the country into two camps: those who want Tunisia to maintain a secular based government, and those who follow Radical Islam as a political ideology.

On Sunday, demonstrators across Tunisia called for the dissolution of Parliament, which gave Saied the green-light to take action based on the will of the people.

By Monday afternoon, Saied had fired the defense minister and acting justice minister. On Wednesday, Saied revealed shocking allegations against Ghannouchi’s party, Ennahda, that they accepted money from foreign governments, which amounts to a crime against democracy in Tunisia. Additionally, Saied has identified 480 persons who have defrauded the government of billions of Tunisian dinars.  He has promised to hold all accountable.

Mr. Saied was elected in 2019, and many Tunisians hoped he could turn things around, seeing him as a fresh political outsider. However, since taking the helm he has been locked in a fight with Mechichi and Ghannouchi.

What is Ennahda platform and leadership?

According to western mainstream media, such as the New York Times and Washington Post, Ennahda is a moderate Islamist party.

Likewise, the same media calls the group which holds Idlib, Syria as the ‘moderate rebels’, when in fact they are the Al Qaeda affiliate in Syria.

Anger toward Ennahda has mounted over the past year as the pandemic hit the country and its economy and a movement against police brutality gained steam. Angry citizen activists called for the dissolution of parliament, which is controlled by Ennahda’s highly unpopular leader Rachid Ghannouchi, who has been its president for 38 years.

Ghannouchi wrote, “The Islamic government is one in which: 1- supreme legislative authority is for the shari’a, which is the revealed law of Islam, which transcends all laws. Al-Ghannouchi, R. (1998). “Participation in Non-Islamic Government”.

Critics, lawyers and politicians have accused Ennahda of forming a secret organization that has infiltrated security forces and the judiciary. Ennahda was relaunched during the Tunisian revolution in 2011.  The party was accused of being behind the 2013 assassinations of Chokri Belaid and Mohamed Brahmi, two progressive political leaders of the leftist Popular Front electoral alliance.

Ennahda was founded in 1981 by the Islamic cleric, Rached Ghannouchi.  The party is part of the global network of the Muslim Brotherhood. The party’s decline in popularity continued into mid-2016, and has now hit rock-bottom with the present corrective action undertaken by Saied.

The role of the Muslim Brotherhood in the 2011 Arab Spring

Ghannouchi has remained a steadfast follower and member of the Muslim Brotherhood.  Ghannouchi attened a global Muslim Brotherhood conference in Istanbul in April 2016, and has continued to serve Islamist and Brotherhood-affiliated organizations in Europe, as a high-ranking member. Most notable is his involvement with a Dublin-based center ECFR, and the designated terrorist organization, the International Union of Muslim Scholars.

Most worrying is Ghannouchi’s ties to Islamist and violent extremist groups, both in Tunisia and around the world.  Leaders of the al-Qaeda-affiliated Ansar al-Sharia group in Tunisia (AST) attended meetings at Ghannouchi’s home in 2011 at which he allegedly advised them to encourage AST youth to infiltrate Tunisia’s national army and National Guard.

In a leaked video, Ghannouchi also claimed that his Ennahda party had previously met with AST leader Seifallah Ben Hassine. In 2014, Ben Hassine was sanction-designated by the United States and United Nations for his links to al-Qaeda in the Islamic Maghreb (AQIM) and his implication in various terror attacks, including the assassination of Tunisian security forces and political figures, as well as the September 2012 AST attack on the US Embassy in Tunis. Ben Hassine died in a US airstrike in Libya in mid-June 2015.

Many compare Egypt’s histories with Tunisia.  In 2011 Egypt had a popular revolution which saw Mubarak step-down.  The US engineered a vote which put a Muslim Brotherhood leader, Morsi, in power. However, the Egyptian people took to the streets once again, in a corrective change, and the current leader stepped into the leadership role.  Many western analysts bemoaned that the fledgling Egyptian ‘democracy’ was squandered with the ouster of Morsi. The Egyptian people made a political correction: they decided the Muslim Brotherhood regime of Morsi was more brutal than that of the previous authoritarian leader, Mubarak.

Western governments such as the US and UK, and to a lesser extent Germany, are very close to the Muslim Brotherhood in their own land, and wanted to install, at any cost, like regimes across the Middle East.  Places such as: Libya, Syria, Egypt and Tunisia.  The west recognizes that the Muslim Brotherhood works well in coordination with Israel, and does not present a threat to Israel, or the occupation of Palestine.

Al Jazeera, the Qatar state news channel, said on Monday the security services had shut-down their bureau in Tunis.  Qatar, and their media, are politically aligned with Ennahda.   Qatar and Turkey are both run by Muslim Brotherhood regimes.

In Syria, the US-NATO war against the Syrian people which began in 2011 and has raged for 10 years, pitted the US backed Muslim Brotherhood terrorists against the only secular government in the Middle East.  The US and the Muslim Brotherhood lost the war, but not before destroying the country, and killing hundreds of thousands of unarmed civilians.

What will Biden’s position be on the Tunisian crisis?

The current Tunisian crisis presents a major test for the Biden administration.  If Saied is seen as usurping power, and against democratic principles, we may see Biden square off in support of the Muslim Brotherhood, and Ennahda.  Already we have a warning from the State Department, “Tunisia must not squander its democratic gains,” Secretary of State Antony J. Blinken, said in a phone call Monday with Mr. Saied, while encouraging him “to adhere to the principles of democracy and human rights.”

“Tunisia is the last ember of the Arab Spring, now snuffed out,” Said Ferjani, an Ennahda member of Parliament, said in an interview, calling on President Biden to demonstrate his commitment to democracy.

While the US and her allies might be on the Ennahda side, the opposing side is formidable.  Egypt and Saudi Arabia, the two biggest powerhouses of the Middle East, join the UAE and Syria in welcoming the Tunisian president’s strategic correction, and the public denouncement of the Muslim Brotherhood.