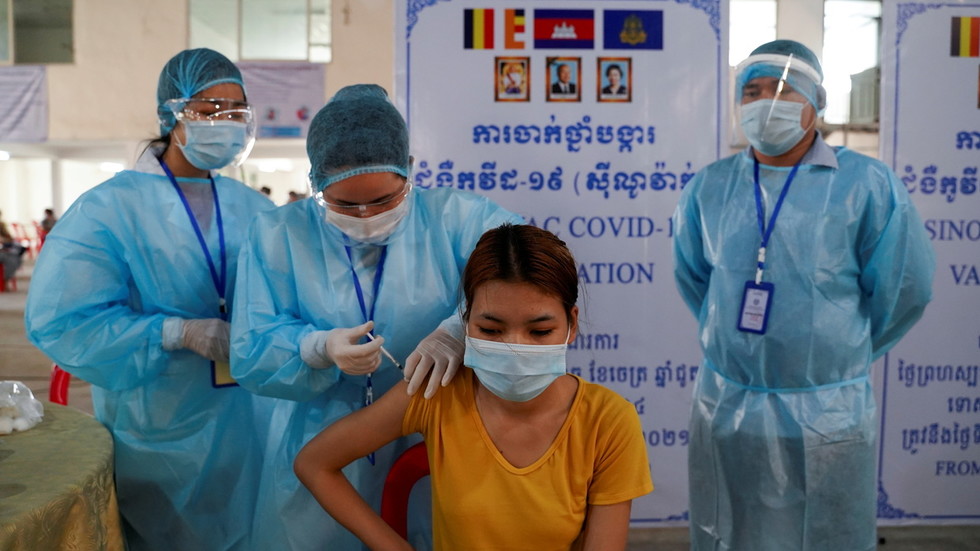 The Cambodian prime minister has announced that his country is rolling out a third-dose booster scheme, using either a Chinese shot or a British jab. Frontline workers will be the first to receive the follow-up injection.

Cambodians who have previously been injected with the Sinopharm or Sinovac vaccine will receive a dose of that produced by Oxford-AstraZeneca, while those inoculated with AstraZeneca’s will be administered Sinovac’s, Prime Minister Hun Sen announced on Sunday. Preparations are underway for the third-dose scheme, and the government has ordered the Health Ministry to purchase more of the Oxford-developed shots, the Khmer Times reported. Up to a million frontline workers will be given priority for the booster shots.

Defending the initiative from the criticism of the Chinese vaccines coming from some quarters, the PM said that, “no matter what anyone says,” more than 1.5 billion doses had been administered to the Chinese people, and many more millions distributed as foreign aid without issue. There are no people in Cambodia “lying dead on the streets like in other countries,” local media reported Hun Sen as saying, adding that he had stated that the vaccination campaign would be completed this year, ahead of schedule. So far, some 11.8 million doses have been administered to Cambodians, with just over 28% of its population having been fully vaccinated.

Vaccination for teenagers aged between 12 and 17 has also been launched in the Southeast Asian country, with the authorities describing the move as an important step in building immunity against the deadly virus. The prime minister said his nation needed to learn to live with Covid-19.

This week, Cambodia imposed a lockdown in its eight provinces bordering Thailand, in an effort to prevent a surge of the Delta variant from spreading. Thailand is now dealing with a spike in coronavirus cases, recording some of its highest numbers of new daily infections since the outbreak of the pandemic. Alongside additional strict lockdown measures, Thailand has announced that, to boost vaccine protection, it would mix AstraZeneca and Sinovac doses henceforth.

Russia has also revealed plans to test the effectiveness of the ‘vaccine-cocktail’ approach. Clinical trials are due to begin soon for combining the domestically produced Sputnik V and AstraZeneca jabs, both being two-component adenovirus-vector vaccines. However, the plan has far from nationwide approval, with only 150 volunteers having so far put themselves forward to take part in the trials, which are planned to last until March next year.

While there are studies suggesting that mixing vaccines could prove effective in fighting mutations, the World Health Organization has warned against the practice. “It’s a little bit of a dangerous trend here. We’re in a data-free, evidence-free zone. There is limited data on mix and match,” its chief scientist Soumya Swaminathan said in July, adding that booster shots were also not presently required.

Several countries have nonetheless already introduced booster shots campaigns. Following concerns over declining vaccine efficacy over time, Israel this week launched a booster shot program for people aged over 60, with its president, Isaac Herzog, among the first to receive the third dose of a Pfizer jab. In Russia, several regions have begun re-vaccinating citizens who received their second jab more than six months ago and want to boost their level of antibodies. Booster doses are also reportedly being prepared in the UK and the US, with the latter having recently purchased 200 million doses of Pfizer’s vaccine.