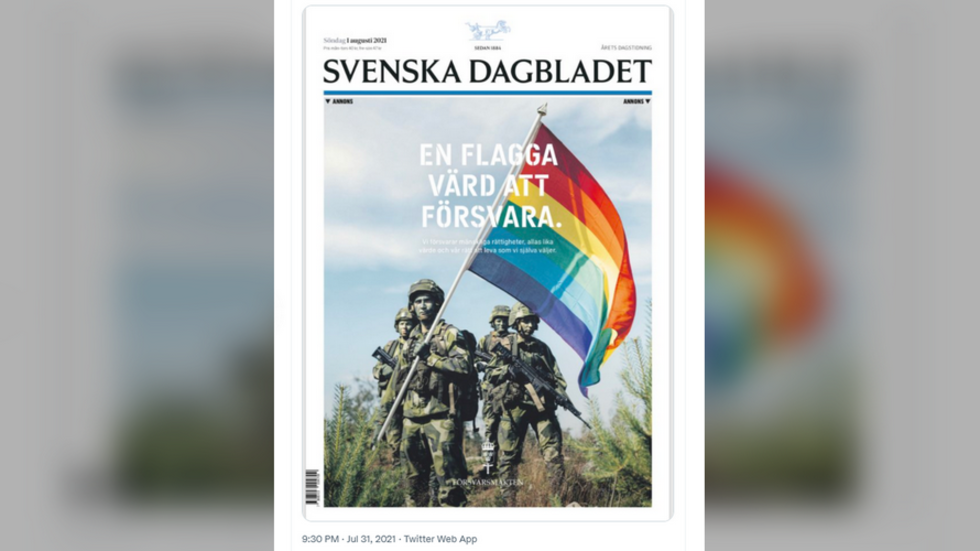 The Swedish Armed Forces have paid for a pro-LGBTQ ad in one of the country’s leading newspapers, featuring soldiers standing beneath a rainbow flag. The campaign has provoked some fiery discussions online.

The front-page ad in the Svenska Dagbladet daily features a group of soldiers in full combat gear, one holding a large rainbow flag.

The text at the top of the image reads, “A flag worth defending,” and, in smaller print below, it says, “We defend human rights, equality for all, and our right to live as we choose.”

The ad was published ahead of the week-long Stockholm Pride festival, which kicks off this Monday.

Its liberal portrayal of the country’s armed forces has led to heated debate online. Some argued that the military should not be involved in activism, especially when it is paid for with taxpayers’ money.

“Shouldn’t the army defend Sweden’s borders, important sites and all of Swedish life? Rights are the responsibility of politicians, aren’t they?” one person asked on Twitter.

“Can we please have a single institution that is not politicized and riddled with activism? I don’t think it’s a particularly high requirement,” another wrote.

Others did not consider the ad controversial. “Many here seem to think that treating homosexuals as equals and defending the country are the opposite things. Why is that?” one user said.

Another commenter dismissed the critics as homophobes. “Do you realize that younger generations see you as dinosaurs?” he wrote. “Nobody listens to you anymore.”

The Swedish Army regularly places pro-LGBTQ ads during Pride events. In 2017, it posted an image of rainbow-colored shoelaces on army boots.

In 2018, it ran a recruitment campaign under the slogan “We don’t always march straight,” and, a year later, under the tag line “Come as you are.” The 2018 ad featured posters of soldiers applying rainbow-hued camouflage to their faces.