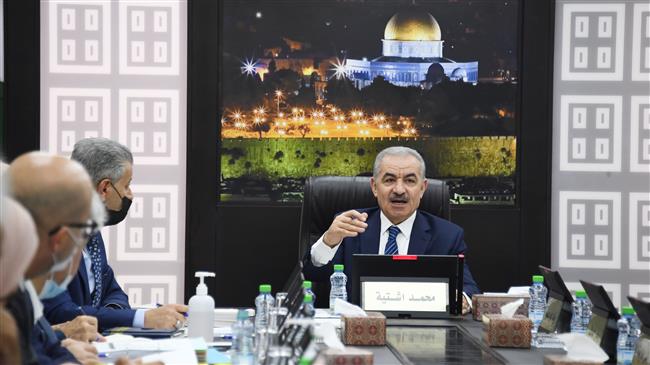 Palestinian Prime Minister Mohammad Shtayyeh has called upon the international community to put an end to the Israeli regime’s policies of persecution, racism, and ethnic cleansing against Palestinians in the occupied East al-Quds neighborhood of Sheikh Jarrah and Silwan, which are being carried out in order to make way for extremist Jewish settlers.

Speaking during a weekly cabinet meeting in the central West Bank city of Ramallah on Monday, Shtayyeh described the Israeli judicial system as a cover for the regime’s policies against Palestinians throughout the entire occupied territories.

He noted that such policies are in blatant violation of the international law as well as the Universal Declaration of Human Rights (UDHR) – adopted by the United Nations General Assembly as Resolution 217, stressing that Israeli authorities are exercising the policies and practices of apartheid as numerous distinguished human rights bodies have pointed to the fact in their reports.

He said the Tel Aviv regime is trying to usurp Palestinian-owned land, confiscate their property and forcibly evict them from their homes by means of the so-called Absentee Property Law of 1950.

Shtayyeh finally called on Israel to stop its settlement expansion activities in the occupied West Bank as the occupying regime has no right to do so.

Sheikh Jarrah has been the scene of frequent crackdowns by Israeli police on Palestinians protesting against the threatened expulsion of dozens of Palestinian families from their homes in favor of hardline Israeli settler groups.

Israel calls it “a real estate dispute” while Palestinians and rights groups say the case highlights discriminatory policies aimed at pushing Palestinians out of al-Quds.

Silwan, home to about 33,000 Palestinians, is located outside the walls of the Old City of al-Quds and its sacred sites.

Israeli officials have been moving Jewish extremists to the neighborhood since the 1980s, and currently several hundred settlers live there in heavily protected settlement compounds.

This has resulted in numerous human rights violations, including the forced eviction and displacement of Palestinian residents.

The Silwan properties are claimed by extremists backed by Ateret Cohanim, a right-wing foundation that works to strengthen the Jewish presence in East al-Quds.

More than 600,000 Israelis live in over 230 settlements built since the 1967 Israeli occupation of the West Bank and East Jerusalem al-Quds.

All Israeli settlements are illegal under international law as they are built on occupied land. The United Nations Security Council has condemned Israel’s settlement activities in the occupied territories in several resolutions.