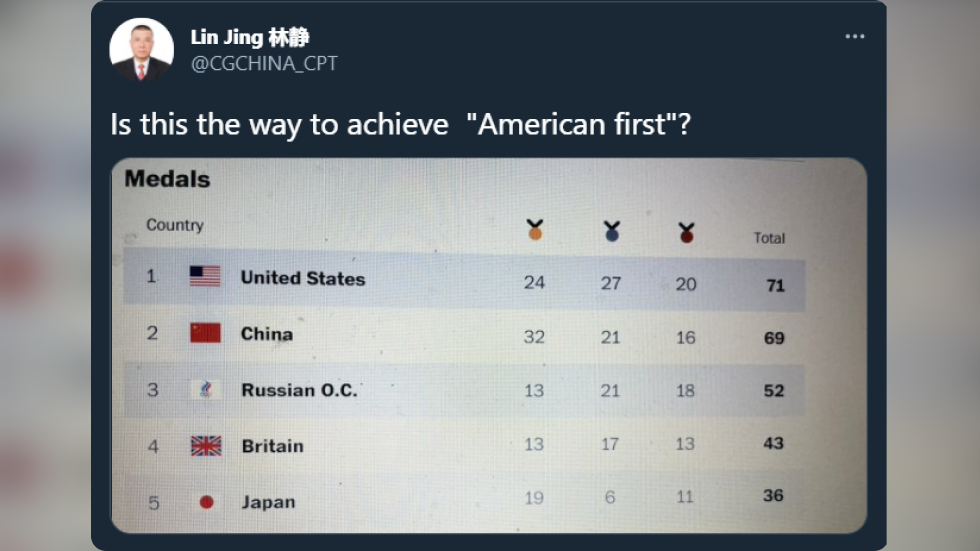 Chinese officials mocked The Washington Post and The New York Times for putting the United States first or “tied” with China in its coverage of the Tokyo Olympics, despite China receiving more gold medals.

China currently has eight more gold medals than the US, but both The New York Times and The Washington Post list the US at the top of the Tokyo Olympics leaderboard. The US outlets are using total medals won as their methodology, despite the fact that traditionally, the country with the most gold medals sits at the top of the table.

However, even when China and the US had the same total number of medals (68) on Tuesday, but China had 10 gold medals more than the US, the Washington Post opted to place the two countries in “tied” 1st place with “T1” written beside the country names.

The official default Olympic Medal Count, on the other hand, lists China in first place due to it having the highest number of gold medals, as does The Guardian newspaper – with the US appearing in second place.

Zhang Heqing, China’s cultural counsellor at its embassy in Pakistan, mocked the Post and Times on Tuesday, posting screenshots of their leaderboards and commenting, “Freedom of Press in the West. Self satisfaction, isn’t it?”

Chen Weihua, the EU bureau chief for the state-backed China Daily newspaper, called the newspapers “the same joke” and tweeted, “US media always have a way to put US on top.”

Lin Jing, the Chinese Consul General in Cape Town, South Africa, questioned, “Is this the way to achieve ‘American first’?”

In an article last week, the Times acknowledged that though most other countries rank the positions based on the number of gold medals, “using silver and bronze only to break ties,” it and other US outlets had decided to use another system which put the nation in first place.

“Publications in the US, including The New York Times, often take this approach,” the newspaper explained, despite accusations on social media of “manipulating” the leaderboard and “counting it wrong.”