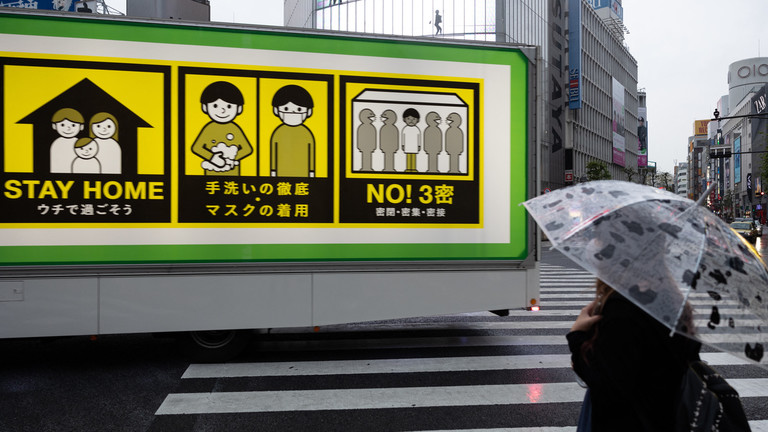 Japanese officials have extended Covid restrictions to more than 70% of the country’s population, amid a surge in infections that is threatening to overwhelm hospitals across the nation, including the Olympics hub of Tokyo.

The new measures, laid out by Prime Minister Yoshihide Suga on Thursday, will declare ‘quasi-emergencies’ across a further eight of Japan’s 47 prefectures, with some experts in the country warning that the growing infection rate is now severe enough to warrant a nationwide state of emergency.

Six Japanese prefectures are under full states of emergency, including Tokyo, where the Olympics are currently being held, as well as another five areas that are under less strict measures. When the newly announced rules take effect on Sunday, more than 70% of Japan’s population will be under some level of Covid restrictions.

Speaking to reporters, Suga rejected the idea of a nationwide emergency, stating that the government is “not considering that now.” Instead, they are focusing on local, targeted measures that focus on hot-spots.

Ahead of Suga’s statement on the new measures, Japan’s economy minister, Yasutoshi Nishimura, warned that health officials are reporting “the situation on the ground [in hospitals] is extremely severe.”

The situation risks overshadowing the Olympics, which are underway after being delayed by 12 months due to the Covid pandemic. While athletes have managed to avoid a large-scale outbreak within the Olympic Village, Games officials have recorded 353 cases related to the competition.