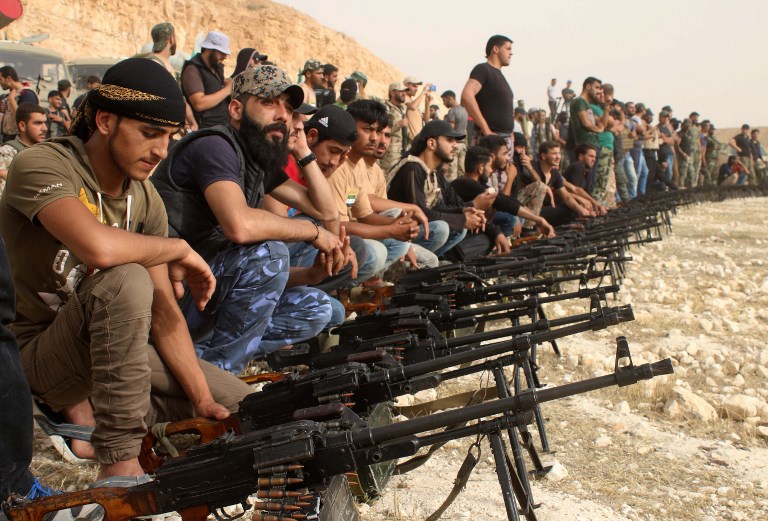 On August 6, 40 terrorists in Deraa set up a booby-trapped ambush on seven soldiers of the Syrian Arab Army (SAA).  Two SAA soldiers were killed, and five were injured as a result of the battle. They put up a heroic fight to defend themselves despite overwhelming odds.

Syrian state media, reported that there is an ISIS leader in hiding in downtown Deraa.  The presence of a high ranking ISIS official may be one of the reasons the terrorists are refusing to vacate the city and allow for searches to ensure the safety of the civilians.

While negotiations were ongoing between the terrorists and the Russians, the terrorists kidnapped over 60 soldiers of the SAA, but later the Russians negotiated the soldiers release.  The Syrian government is insisting on having all individual and light weapons surrendered by the terrorists, but they have so far rejected the demands.

Late last month, terrorists in Deraa fired rockets at Red Crescent workers while they were assisting locals in evacuating.

Deraa, is known in the west as the ‘birthplace of the Syrian revolution’, is home to 40,000 residents, and was a terrorist stronghold until 2018.

As of May 26, over 50 assassinations have taken place, killing civilians, soldiers of the SAA, and government supporters, who were killed by terrorists using machine guns while riding motor cycles.

A current deal is being worked on between the terrorists and the Russian negotiators. The terrorists are being asked to give up small and mid-weight weapons, and the SAA will man checkpoints inside Deraa to maintain law and order.  The road between Deraa to the suburbs is to be opened, but the deal was rejected so far. However, a number of terrorists surrendered to the SAA and were given amnesty in return of an oath to cease fighting the SAA.

There was a previous 2018 peace deal in Deraa, brokered by the Russians, but it was violated by the terrorists continuously, with snipers and killings.  Several days ago, at midnight, the terrorists booby-trapped the Ba’ath Party headquarters in Diaal, a city in Deraa province. There were no injuries, but property damage was reported.

Al-Balad, an area in Deraa, was blockaded by the SAA forces on June 25 after the terrorists resisted an order to surrender their light weapons and allow the SAA forces to search houses in the area, which is populated by 40,000 people.

The proposed deal would have allowed thousands of terrorist and civilians safe passage to Idlib. The SAA recaptured Deraa from terrorists in 2018.

Syrian governmental institutions have returned, but the SAA still has not been deployed across the whole province, and bombings and assassinations carried out by terrorists have since become routine.

Who are these terrorists, who is supporting them?

Ismat al-Absi, is a Free Syrian Army (FSA) leader in Deraa, currently residing in the northern countryside of Aleppo, which is under the occupation of Turkey, and home to the Turkish supported mercenaries, FSA, who have been sent to fight in Libya, and are scheduled to be the protection force for the Afghanistan international airport.

When the SAA freed Deraa in 2018, many FSA stayed in Deraa, instead of evacuating to Idlib.  These are the terrorists now who are holding 40,000 people as hostages in their fight against the SAA.

In the past, injured FSA terrorists in Deraa were treated in Israeli hospitals, and former Prime Minister Netanyahu personally visited the fighters and pledged support.

Turkey is also supporting the FSA: in Idlib, the Aleppo countryside, and in Deraa. The spokesperson for the terrorists, Muneef al-Zaim, recently called on Turkey to be their guarantor there.

‘The day before Deraa’

Al-Balad, the area in Deraa currently in crisis, is considered to be the birthplace of the Syrian ‘uprising’ in March 2011, and part of the ‘Arab Spring’.  Much has been written about the origins of the crisis, and whether it was a revolution, a civil-war, or a sectarian war.  An article was written titled ‘The day before Deraa’ and has become the definitive explanation of the origins of the Syrian conflict. The conflict began in Deraa, which was a small, insignificant agricultural city on the Jordanian border. The fact it was on an international border, and one with an American military base nearby, was the reason the crisis was born in Deraa, instead of the capital, or the most populated city in Syria, Aleppo. The Syrian crisis was a US-NATO planned attack on the Syrian people, to destroy the country and infrastructure, to effect ‘regime change’, and to install a Muslim Brotherhood leader at the helm in Damascus.  Their plan worked in Egypt, but only lasted one year, and the people went back to the streets and revolted against the US supported Muslim Brotherhood.

The Russian role in negotiations

On July 28, a meeting was held between the negotiating committee and representatives of the 8th Brigade of the 5th Corps affiliated with Russia.

The Russian Defense Ministry’s Center for Reconciliation of Opposing Sides and Control over the Movement of Refugees in the Syrian Arab Republic was established in February 2016. Its tasks include the signing of agreements of illegal armed groups and individual settlements joining the ceasefire, as well as coordinating the delivery of humanitarian aid.

Ultimately, the Syrian government will prevail.  Their strategy of peaceful negotiations, with the help of Russian negotiators, has proved a successful strategy across Syria. It is possible the terrorists will choose to peacefully be transported to Idlib, which was the original deal offered, but refused by many. The civilian population, held hostage, cannot be forgotten.  All efforts to free the civilians from the control and oppression of the terrorists must be considered.  In the end, it may be decided a military operation is the only way to free Deraa.