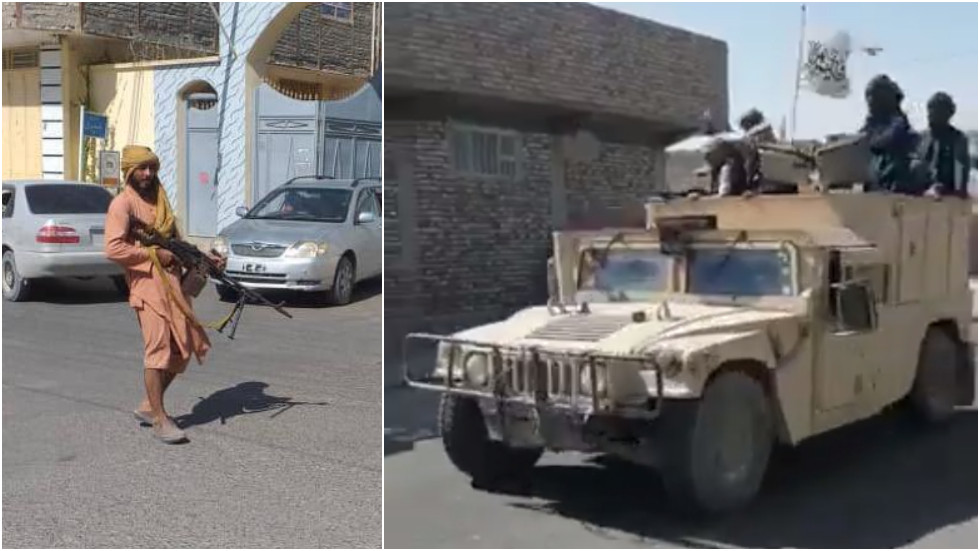 Taliban militants were spotted parading around in US-made Humvees after seizing a major city in Nimroz province, footage shows – the first regional capital to fall to the group as it launches a wave of attacks across Afghanistan.

The militants were seen making victory laps around the city of Zaranj on Friday afternoon in the captured vehicles, having just captured the provincial capital after overrunning Afghan government forces.

Other footage purported to show a deserted airfield in Zaranj – where American forces once had a presence – apparently abandoned by government troops during the invasion.

Situated far in Afghanistan’s southwest along the border with Iran, Zaranj is the first regional capital to fall to the Taliban since it launched a major offensive in the spring, though the group has made an aggressive push into other parts of the country.

Earlier this week, the capital of Helmand province, Lashkar Gah, was nearly taken by Taliban fighters, who grabbed nine of its 10 districts. Afghanistan’s second-largest city of Kandahar – capital of the province of the same name – has also come under assault, with one local police chief claiming on Thursday that the group has killed nearly 1,000 people as it besieges the city.

Perhaps most concerning for Afghan officials – and their American counterparts, who are now overseeing a full military withdrawal after a 20-year occupation – are attacks on the national capital of Kabul. Earlier this week, Taliban car bombs rocked the city as militants struck the home of acting Defense Minister Bismillah Khan Mohammadi. Though the minister escaped unharmed, at least eight were killed in the assault, while the group assassinated a top media official in Kabul days later.

According to the latest report from the US government’s top watchdog for the Afghan war, John Sopko, the Taliban controls at least half of Afghanistan’s 419 districts, nearly doubling its territorial holdings between June and July as its offensive picked up momentum. Though Sopko’s report said the group did not control any provincial capitals when it was published in late July, facts on the ground have quickly changed in the days since, seeing the Taliban capture a major city and threaten several others.

President Joe Biden has set a September 11 withdrawal deadline for US forces in Afghanistan, extending a May date initially agreed between the Taliban and the prior administration. While the Pentagon said in July that the exit was more than 90% complete, American airstrikes have continued against the Taliban, with the New York Times reporting “dozens” of bombings over the last two weeks. Administration officials also told the Times that the Pentagon is “likely” to seek another air campaign in the coming months should insurgents seriously threaten Kabul or Kandahar, raising questions about whether Washington truly intends to leave the country by September.