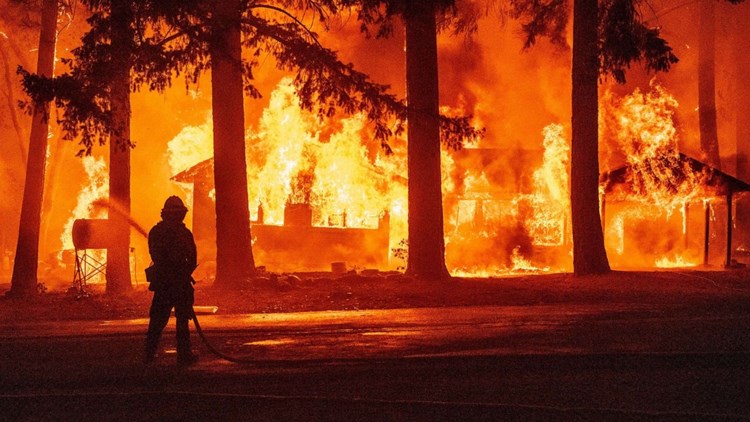 California authorities announced on Saturday that they are searching for at least five people who went missing in the devastating “Dixie” fire that is currently spreading in the American West and continued Saturday’s massive expansion.

The “Dixie”, the third-largest fire in California history, destroyed shops and homes this week in the small town of Greenville and in the town of Canyondam.

Since it broke out in mid-July, the fire has affected 180,782 hectares in four provinces so far. The California Fire Department said on its website that the fire was only 21 percent contained.

The Plumas County Sheriff’s Office said there are at least five people believed to be missing in Greenville, and a search for them is ongoing. Five other people, who had also gone missing, were found earlier.

Despite repeated orders to evacuate by the authorities, some residents insisted on fighting the fire themselves.

Starting Wednesday, “Dixie” swept through the town of Greenville, which has a population of about 800 people.

The town looked charred and wrecked after the wooden structures were completely destroyed and some stone buildings were reduced to rubble.

More than 5,000 firefighters are battling the fire, which sends out massive clouds of smoke that are easily visible from space. The winds, in addition to the presence of steep terrain and an abundance of dry vegetation, fueled the flames, making the task of firefighters difficult.

This fire has spread to northern California for three weeks, fueled by incessant winds and the effects of climate change, including extreme heat and severe drought in the region.

As of the end of July, California fires destroyed an area 250 percent larger than the one destroyed by fires in 2020, the worst recorded fire year in the state’s modern history.

The Dixie Fire reignites past trauma from the Paradise Fire in 2018, the deadliest California fire in recent years.

Greenville has witnessed several disasters in the past, as a massive fire destroyed a large part of the city in 1881, and many dangerous fires threatened the residents for 140 years.