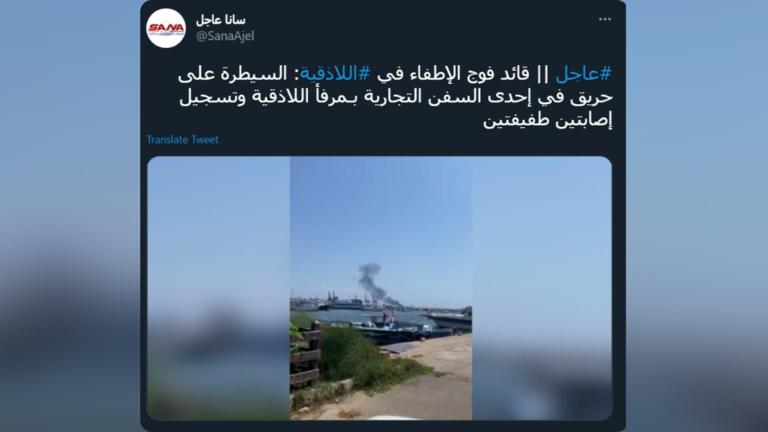 A fire at the Syrian port of Latakia has been extinguished, according to state media, after a reported explosion sent black smoke billowing above the city. Some workers required oxygen and further treatment.

On Tuesday, a fire broke out on a commercial vessel during maintenance operations in Syria’s Latakia port, according to the Syrian Arab News Agency (SANA), a state-controlled news agency.

In photos and videos shared online, black smoke can be seen emerging from a docked ship. Some reports suggested that there was an initial explosion.

SANA reported that the fire had been extinguished by the city’s fire brigade and the Civil Defense Department of the Latakia Port Company.

Several workers experienced shortness of breath and were transferred to a hospital for treatment. The injured were given oxygen and other treatment before being discharged.

According to the director general of the port company, Amjad Suleiman, the ship had been emptied before maintenance work began.

TankerTrackers.com, which tracks ships and their cargo, reported the vessel in Latakia was called ‘WISDOM’. “WISDOM entered Latakia on June 29th or 30th, 2021. She docked on the north end of the port but relocated to the south to make room for the Iranian tanker SAM 121,” the group wrote in a tweet.

According to the Jerusalem Post, the vessel has previously been used to transfer Iranian oil from Iranian tankers to Syria, citing data from TankerTrackers.com.