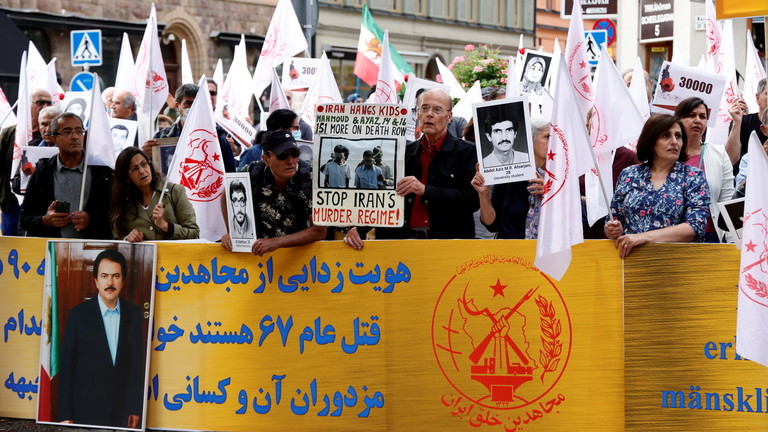 The trial of an Iranian citizen suspected of playing a role in the execution of thousands of political prisoners during a 1988 purge in Iran has opened in the Swedish capital of Stockholm.

The court case began in Stockholm District Court on Tuesday, with the 60-year-old standing trial for his alleged involvement in “intentionally taking the life of a very large number of prisoners”. The Iranian national is suspected of playing a role in the 1988 government-sanctioned massacre of an estimated 5,000 dissidents who were sympathetic towards the Mujahedin during the eight-year war between Iraq and Iran.

While Swedish prosecutors declined to disclose the name of the individual publicly, the suspect has been identified by news agencies as Hamid Nouri, reportedly a former assistant to the deputy governor of Gohardasht prison in Karaj, not far from the Iranian capital of Tehran. The man has insisted he is innocent, refuting all allegations of his suspect involvement.

Handfuls of Iranians flocked around the court on August 10, demanding justice for the crimes of the massacre, as per footage uploaded to Twitter.

A number of witnesses are set to take the stand to deliver their testimonies over the next three days of the court’s sittings, according to AFP, and the trial is expected to run until April 2022. Swedish law stipulates that the state can try both Swedish citizens and nationals from other countries for violations against international law carried out abroad, such as war crimes and murder.

Nouri arrived in the Scandinavian country in 2019 and was arrested after dozens of people filed complaints with authorities in Sweden, including a former political prisoner, Iraj Mesdaghi, who gathered swathes of information on the suspect and his alleged crimes.

The hearing comes as tensions continue to escalate between the Islamic Republic and some Western countries. Tehran’s new president, Ebrahim Raisi, has been accused of crimes against humanity by Amnesty International for his role as a judge during the 1988 execution. Raisi told reporters in June that he is “proud” of his work in “defending human rights in every position” he has held, as well as national security.