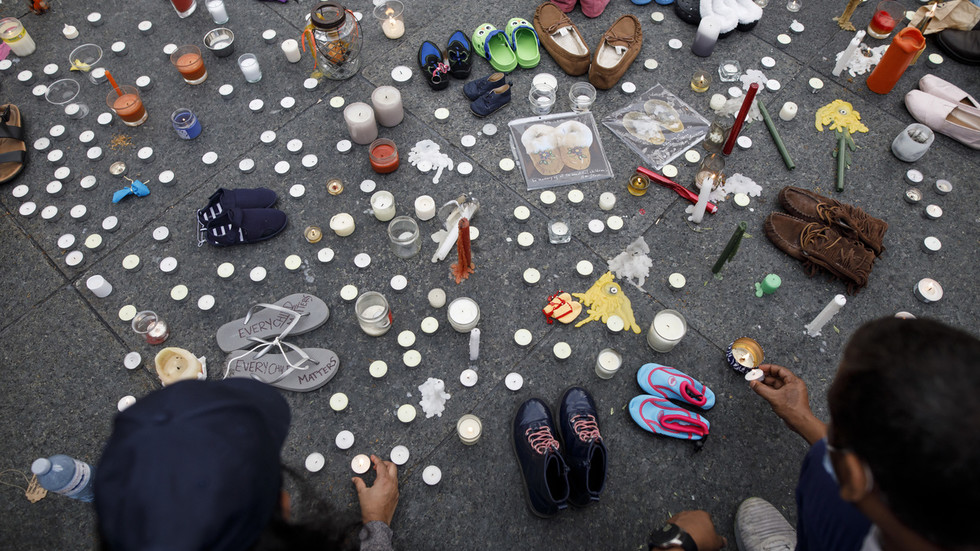 The Trudeau administration announced the funding on Tuesday, with indigenous groups currently developing plans to uncover more burial sites. Around Can$83 million (US$66 million) will go towards plans to research and locate sites, memorialize and rebury victims. A National Advisory Committee (NAC) will offer assistance.

Other portions of the funding will be used for mental health and community support, and to help “manage” residential school buildings – by either demolishing or remodeling them into new structures, as per the wishes of indigenous communities.

In recent months, more than 1,000 graves have been discovered on sites where the schools once stood. Under a system likened to “cultural genocide,” at least 150,000 indigenous children were forcibly taken from their families and made to attend some 140 such schools, which were funded by the federal government and run by churches – and where they were stripped of their cultural identity.

Of the new funding, about Can$20 million (US$15.9 million) has been earmarked for a national monument to honor survivors in Ottawa – and millions more will be spent over three years to highlight the legacy of the schools, including the first National Day for Truth and Reconciliation, due to be held on September 30.

Miller was joined at the virtual announcement by three other federal ministers, as well as a number of indigenous leaders and elders. The leader of national advocacy group Assembly of First Nations, RoseAnne Archibald, said she could no longer call the institutions “schools.”

Canadian government policies, along with the church, committed crimes against humanity, crimes against our children. Make no mistake, we are seeing evidence of genocide.

Archibald said the government’s announcement was a “long overdue step in acknowledging the devastating harm” the institutions had done, adding that now was “the time for accountability, action and healing.”

The government also announced it intends to select a “special interlocutor” to liaise between the government and indigenous communities and help frame policies relating to residential school graves.

The special interlocutor and the NAC will “collaborate and draw from each other’s expertise, and ensure that provinces and territories, as well as other relevant institutions such as churches are engaged.”

Natan Obed, president of Inuit Tapiriit Kanatami – which works for the interest of the country’s Inuit people – expressed hope that the creation of the two positions will be a “necessary [step] to respect the human rights” of indigenous Canadians and will “give respect” to the children who are yet to be found.

“As a country we have a lot of work to do to properly respect First Nations, Inuit and Metis, and I do hope that we can use this day as a way to understand how to be respectful, kind and loving to one another,” Obed said.