Home Politics ‘Looks very awful and ill’: Journalist tells RT he ‘couldn’t recognize’ Assange during High Court hearing on his extradition to US 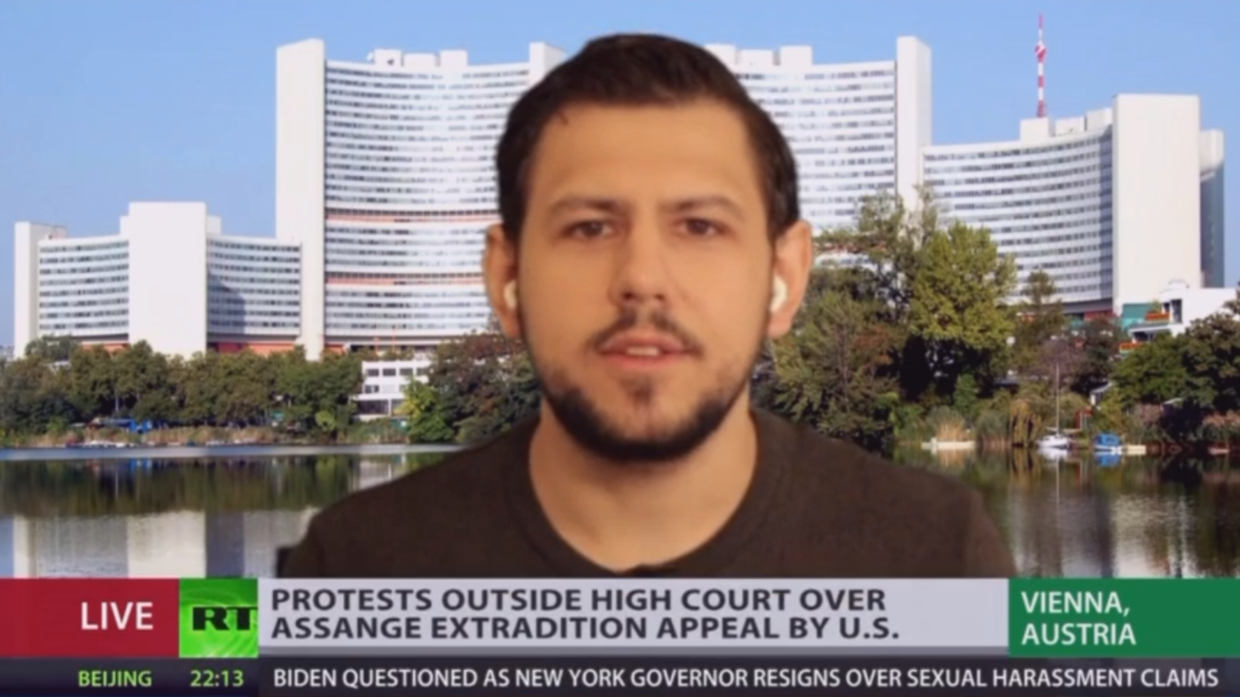 Journalist Richard Medhurst claims that he initially didn’t recognize Julian Assange, who looked “awful and ill,” as the WikiLeaks founder appeared in London’s High Court while the United States pushes to have him extradited.

Medhurst told RT said that he “literally did a double take” upon seeing Assange during the High Court preliminary hearing on Wednesday, which he was connected to remotely.

“I couldn’t recognize that it was Assange, he looked extremely old,” Medhurst declared, adding that the WikiLeaks founder looked so “awful and ill” that it took him a “minute” to realize it was Assange as medical witnesses testified that his “health has deteriorated and he’s been tortured” while in detention.

Assange’s voice also “did not sound very well,” according to Medhurst, who noted that “this is absolutely normal given the fact that he’s locked up in solitary confinement” and has been in “arbitrary detention now for seven years in the Ecuadorian Embassy, two years in Belmarsh Prison.”

“This is a journalist who’s not serving a sentence, he’s not a criminal, and he’s in a maximum-security prison in Britain’s Guantanamo Bay,” Medhurst protested, calling Assange’s imprisonment “completely unjust,” “a crime against press freedoms,” and “an affront against his personal health.”

On the process of the preliminary hearing, Medhurst explained that the United States “already won in January when Judge Baraitser ruled in their favor” and said that she agreed with all of the US government’s “political charges” against Assange, including charges under the Espionage Act and conspiracy to commit computer intrusion.

Because of this, these charges are no longer being debated in court and the discussion has pivoted purely to Assange’s health and whether it is safe enough to extradite him to the US.

“There’s nothing about press freedoms here, even though there are dozens of lawyers, historians, journalists who testified at the extradition hearing,” Medhurst said, pointing out that “some of the biggest intellectuals and experts in their respective fields” have all said in court “that this is an affront on press freedoms.”

Assange’s prospects are looking “even worse now because the United States was granted three out of five grounds to appeal regarding Julian Assange at the High Court and today what’s happened is that this decision has been overturned, so it’s not three out of five, it’s all five,” Medhurst explained. “So now they can go into the High Court in October and they can question the validity of these psychiatric evaluations.”

They can say, ‘Well we don’t think he’s depressed, we don’t think there’s a heightened risk of suicide,’ even though the judge…blocked his extradition in January precisely because there is a high risk of suicide if he’s extradited to the United States given the horrendous prison conditions, given the steadfast guarantee he’ll be convicted and found guilty unfairly.

Medhurst concluded by emphasizing that the case is ultimately “about press freedoms” and “being able to do your job as a journalist and publish evidence” of government crimes and human rights violations.

“He’s not allowed to do that job. They’re trying to make an example out of him,” the journalist warned. “And it doesn’t necessarily have to result in a conviction in the end. The whole process is the punishment.”

“The fact that he’s been in arbitrary detention for seven years and two years in Belmarsh, this could be dragged out for decades, and this is what they want. They want to torture Assange and make an example out of him.”

Watch the full interview below.