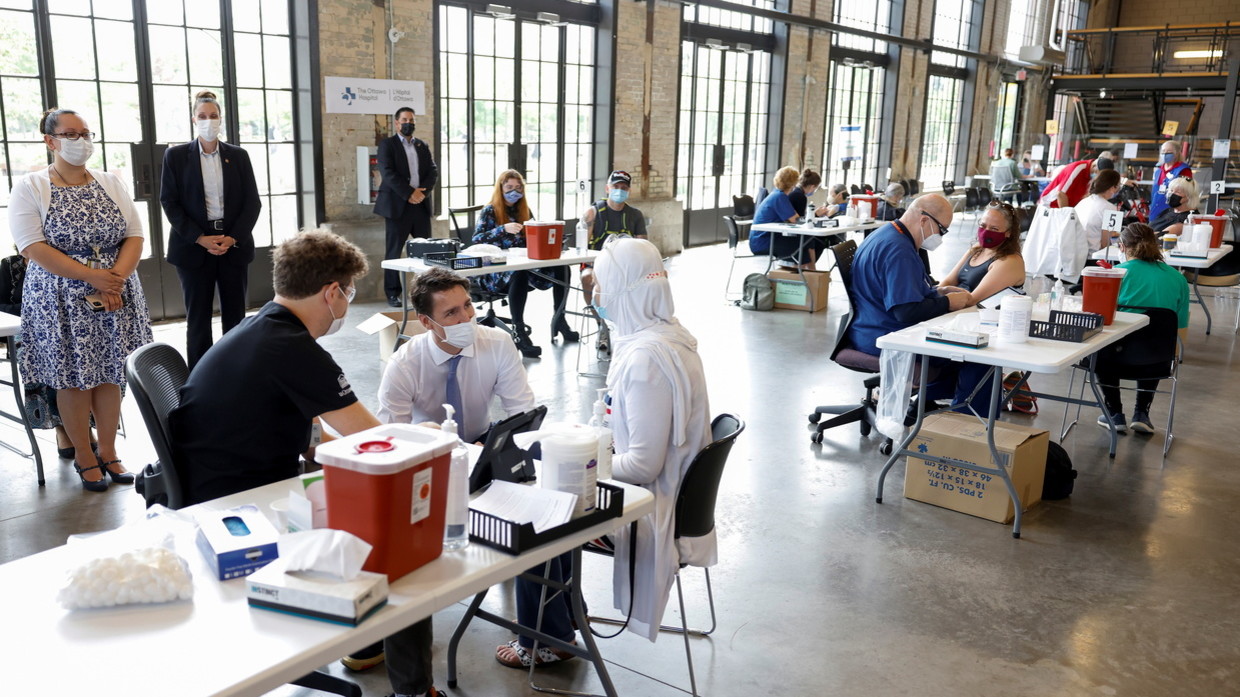 Canada’s government will soon require all public servants to be vaccinated against Covid, two ministers have said, while mandatory vaccinations are also looming for air and train travelers.

Speaking during a news conference on Friday, Transport Minister Omar Alghabra announced plans to greatly expand the scope of mandatory vaccinations in Canada. In the coming weeks, all government employees and people working in certain industries subjected to federal regulations – such as airlines and railways – will be required to be vaccinated against Covid-19.

While Canada boasts one of the highest inoculation rates in the world – over 80% of eligible citizens have received at least one jab – the country still “must do better,” the minister argued, saying making vaccinations mandatory for the public sector will help to speed up the inoculation process.

Being vaccinated against Covid-19 will become an enforced condition to enter their workplaces, Intergovernmental Affairs Minister Dominic LeBlanc warned during the same news conference, and federal workers who refuse to get a jab risk losing their jobs.

This is a mandatory requirement to go to work in a federal workplace or work in the government of Canada.

“Obviously, there will be certain individuals for medical reasons that will not be able to be vaccinated and the appropriate officials will work with them to ensure that the appropriate measures are in place,” LeBlanc added.

Canada, a nation of some 37.6 million, has around 300,000 federal public servants, while hundreds of thousands more people work for government-owned or federally-regulated companies – meaning the mandatory vaccination move is set to affect a sizable chunk of its population.

Mandatory Covid jabs are also expected to be introduced for “certain” categories of travelers, Alghabra said. While the minister did not provide any timeframe for this provision, the government is working to deliver it “as quickly as possible.”

“This includes all commercial air travelers, passengers on interprovincial trains, and passengers on large marine vessels with overnight accommodations, such as cruise ships,” Alghabra said. “Vaccine requirements in the transportation sector will help protect the safety of employees, their families, passengers, their communities and all Canadians. And more broadly, it will hasten Canada’s recovery from the Covid-19 pandemic.”

The looming vaccination mandate swiftly came in for a barrage of criticism, with some accusing the government of overstepping its powers in the desire to speed up the inoculation drive. The main opposition party, the Conservatives, said the mandate went too far, though acknowledged the vaccines are the “most important tool in the fight against Covid-19.”

“Conservatives support Canadians’ right to determine their own health choices,” a spokesman for the party’s leader Erin O’Toole, Mathew Clancy, told Reuters in an e-mailed statement. “Canadians expect reasonable measures, such as rapid testing for those who are not vaccinated.”

Other critics were more caustic, with Maxime Bernier, head of right-wing People’s Party, branding the ruling liberals “fascists” over the upcoming measures. Controversial Canadian psychologist and author Jordan Peterson provided a similar assessment of the proposed measures, tweeting that “medical fascism has arrived.”