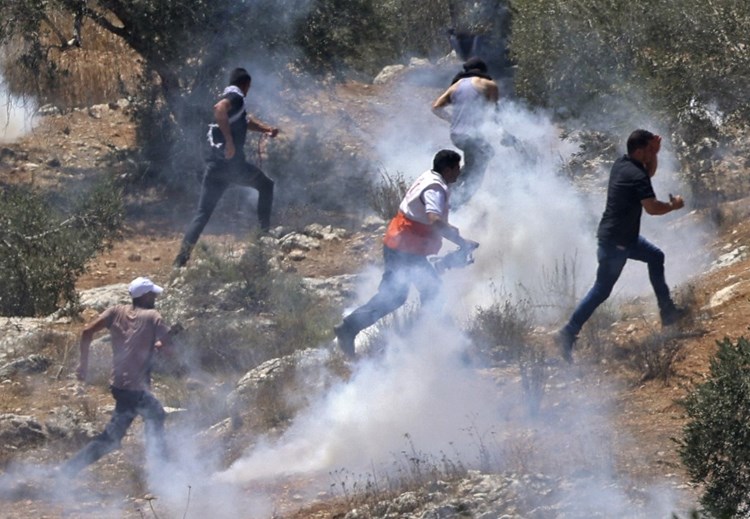 Confrontations erupted on Friday, in Beita, south of Nablus in occupied Palestine, as occupation troops shot tear gas canisters at demonstrators who protested the establishment of a settlement outpost on Jabal Sbeih.

Approximately 40 people were injured, according to an Al Mayadeen correspondent, during the ongoing demonstrations against settlers.

The Palestinians in Jabal Sbeih, northern occupied West Bank, commemorated the 100th anniversary of the start of “night confusion” activities to oust the Israeli settlement atop the mountain.

During clashes with Israeli occupation troops in several parts of the West Bank this afternoon, dozens of Palestinians were injured, five of them with rubber bullets.

In the village of Beit Dajan, east of Nablus, five civilians were injured by rubber bullets while dozens of people suffocated as a result of tear gas inhalation.

The director of ambulance and emergency in the Red Cross society in Nablus reported that all injuries were treated in the field.

Weekly rallies against the decision to remove a significant portion of Palestinian property take place in Beit Dajan’s eastern district.

Earlier today, the occupation forces fired teargas and stun grenades at worshipers at the Ibrahimi Mosque in Al-Khalil.

Approximately 5,000 Palestinians attended Friday prayers at the Ibrahimi Mosque, at the request of the Ministry of Religious Affairs, defying Israeli Judaization projects aimed at altering the appearance of the mosque.