Home Politics Middle East Is This the Fall of US Strategy in Afghanistan? 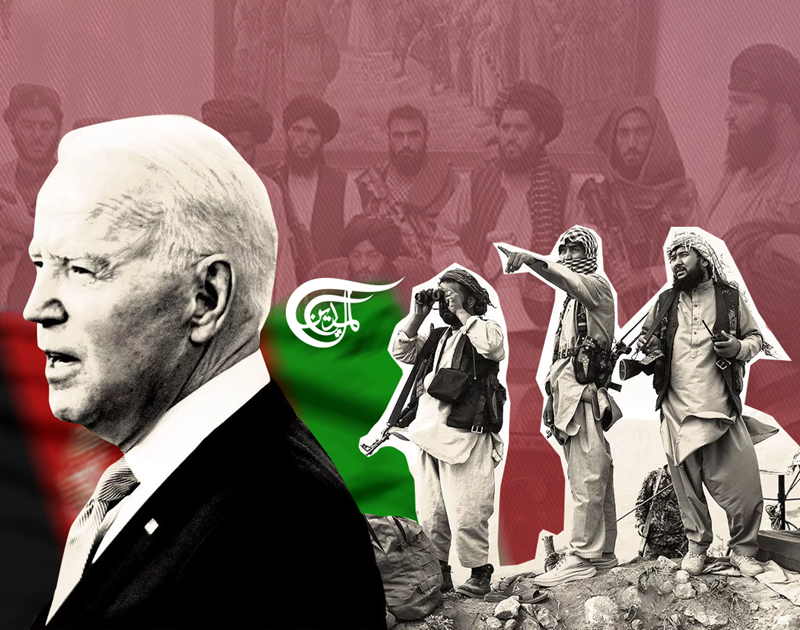 The German philosopher Georg Wilhelm Friedrich Hegel once said, “We learn from history that we learn nothing from history.” This quote perfectly paints a picture of the repeated US foreign policy failures from Hanoi, to Beirut, to Kabul, to Baghdad, to Havana, and so on and on.

The never-ending costs of US failure, in lives and dollars, are tragic for those living under occupation and others recruited to force it. The poor decisions of the United States will go down in history, never to be forgotten.

Joe Biden’s decision to withdraw all US troops from Afghanistan by the 20th anniversary of the 9/11 attacks was a miscalculated decision on all levels – not because the did any good to Afghanistan, but the reason is attributed to how the US left the country. In a war that cost 20 years and 1.5 trillion dollars and was “lost” in 20 days, a lot of things could be happening that are far from good.

Afghanistan’s situation today is more unpleasant, unacceptable, and difficult than it previously was.

What Biden claims to present as a definitive end to the US’s “Forever War” is a pure disaster.

Former defense secretary Robert Gates once said that Biden “has been wrong on nearly every major foreign policy and national security issue over the past four decades.” He has certainly been calamitously, tragically, wrong about Afghanistan.

On July 8, Biden stated, “The Taliban is not the […] North Vietnamese army. They’re not — they’re not remotely comparable in terms of capability. There’s going to be no circumstance where you see people being lifted off the roof of [an] embassy … from Afghanistan.”

Precisely 38 days later, the Taliban entered the presidential palace in Kabul hours after former President Ashraf Ghani fled the country Sunday for Tajikistan. Afghanistan’s acting defense minister, General Bismillah Mohammadi, slammed the fleeing president in a brief tweet, saying: “They tied our hands behind our backs and sold the homeland.”

Meanwhile, helicopters ferried US diplomats off the roof of the US embassy in Kabul, clearing the way for the Taliban to confront and defeat Afghan security forces. Many major cities fell with little to no resistance, including Jalalabad, a key city captured by the Taliban on Sunday.

A stain on a very surprised Joe Biden

US Officials are frankly admitting they miscalculated the situation in Afghanistan.

“The fact of the matter is we’ve seen that that force has been unable to defend the country,” Secretary of State Antony Blinken said, referring to Afghanistan’s national security forces. “And that has happened more quickly than we anticipated.”

Furthermore, some members of Congress have already demanded more information from Biden’s administration, such as how its intelligence could have so badly misjudged the situation on the ground, or why more robust contingency plans were not in place.

The top Republican on the House Foreign Affairs Committee  Rep. Michael McCaul slammed the Biden administration over the fast-waning situation in Afghanistan, calling it an “unmitigated disaster of epic proportions” that could lead to dreadful repercussions.

“I think the secretary has been devoid of reality this whole time since the decision was made in May. I think it’s an unmitigated disaster of epic proportions,” McCaul said.

“And I think the President — this is going to be a stain on this President and this presidency. And I think he’s going to have blood on his hands for what they did.”

Senior US officials have recently said that discussions are underway among top White House advisers on how Biden should address the deepening crisis.

Joe Biden is shifting the blame

The decision which was made against the advice of US generals is the worst US foreign policy failure. Besides, Biden’s attempt to avoid responsibility for the disaster in his Saturday statement was completely unconvincing. He attempted to pin the blame on Trump, noting that he inherited an agreement that called for the United States to leave by May 1. This was a pitiable deal.

“One more year, or five more years of US military presence, would not have made a difference if the Afghan military cannot or will not hold its own country,” Biden stressed.

Meanwhile, US former President Donald Trump has called for Joe Biden to resign in the wake of the developments in Afghanistan, describing the current situation as a “disgrace.”

In a statement, the former president made a snide comment: “What Joe Biden has done with Afghanistan is legendary. It will go down as one of the greatest defeats in American history!”

Even for Trump, his words might be right this time.

Finger of the blame pointed in one direction

The situation in Afghanistan makes the US look so bad even in the eyes of its allies, for regarding the Afghanistan crises, the finger can only be pointed in one direction.

The political, social, and diplomatic failure in Afghanistan calls into question the United States’ leadership and credibility. Even as the Biden administration assures allies that “America is back,” the situation on the ground totally opposes the rhetoric.

Director of Asian and Central Asia Programs at the US Institute of Peace, Scott Worden, said that “The world is definitely watching US actions in Afghanistan to see whether the US is a reliable partner while there are longer-term strategic consequences that could come from global doubts about American commitments to its partners.”

On his account, a former Deputy Assistant Secretary of Defense for Afghanistan, Pakistan, and Central Asia under Former US President Barack Obama, laid the unpalatable truth bear: “The lesson here is that nobody should trust the United States, whether it’s Ukraine or Vietnam or Taiwan or any country.”

Furthermore, Chinese Foreign Ministry Spokesman Wang Wenbin said earlier that “The US, in disregard of its responsibilities and obligations, hastily withdrew from Afghanistan, leaving a mess and turmoil to the Afghan people and regional countries. This further exposed the hypocritical face of the US under the cover of ‘defending democracy and human rights.”

Addressing the most recent developments in Afghanistan, Hezbollah’s Secretary Sayyed Hassan Nasrallah said on Sunday that “Whoever has hope in the United States should have Afghanistan put before him,” pointing to the 20-year occupation which has left over a million people dead, and a million and a half displaced.

“If the agreement with the Taliban is true, this means that Washington has stabbed its friends in the back and betrayed them, “he added.

“The United States has left millions of Afghans hungry, thirsty, and homeless,” he stressed.

Even for America’s closest ally “Israel,” a researcher at the Jerusalem Center for Public Affairs and a Brigadier-General in the Israeli reserve army, Yossi Kuperwasser, said that the rapid collapse of the Afghan government and the US-funded army against Taliban (amounting to 300,000 soldiers with advanced equipment!), is a reason to make the US allies concerned.

Kuperwasser complained that the US strategy in executing liberalist policies without taking into consideration the cultural and political frameworks was a miscalculation from the start. He noted that: “This is just another example of the difficulties the West, particularly US intelligence, faces in dealing with the Islamic world.”

On a global scale, Kuperwasser believes that the US withdrawal from Afghanistan will be seen as a display of weakness, stressing that “The departure will be seen as a sign of US weakness which stems from a refusal to sacrifice human lives or pay up in the ongoing fight against radical Islam.”

Meanwhile, hundreds of people worldwide protested US foreign policy in Afghanistan, blaming US President Joe Biden for betraying the people of the war-torn country.

Many of those present at the protests expressed their rage and disappointment over the US strategy in Afghanistan, mirroring the fading image of the “democratic US” in the eyes of the world.