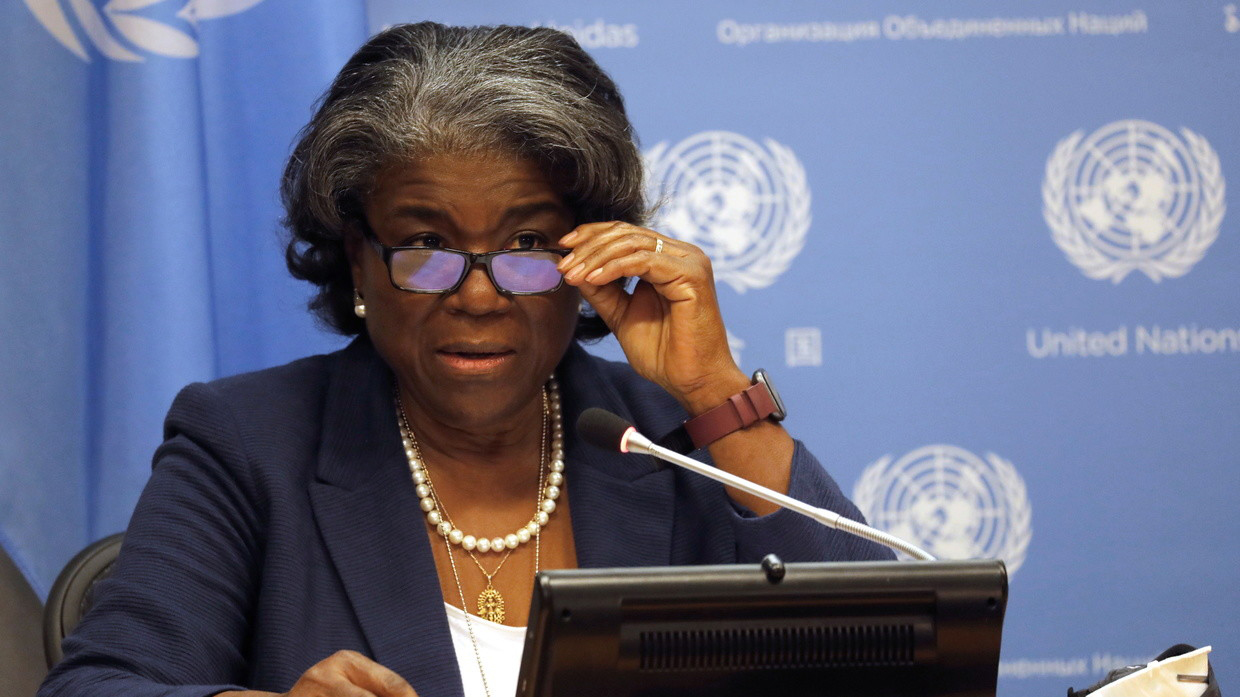 Linda Thomas-Greenfield, the US ambassador to the United Nations, is facing pushback for citing a “strongly worded statement” demanding the Taliban “respect women’s rights” when asked about reports of human rights violations.

The ambassador has done her best in a handful of media interviews this week to do public damage control on the situation in Afghanistan, after the Taliban captured Kabul and as President Joe Biden faces international scrutiny for struggling to evacuate both Afghan allies and American citizens amid the chaos.

In an interview with CNN’s Wolf Blitzer on Wednesday, Thomas-Greenfield was confronted about “mounting reports” of the Taliban threatening citizens and committing violence that goes against the supposed promise they made this week for peace and maintaining rights for women.

In response, the ambassador awkwardly cited the UN security council’s “strongly worded press statement” that “expressed in no uncertain terms” that the Taliban must “respect women’s rights” and “humanitarian law” going forward.

A Taliban spokesperson said at a press conference this week that a new government is being formed in Afghanistan and promised that women would maintain their right to work and education. The promise was taken with a pinch of salt by critics, given the group said the rights will be under “our cultural framework” and the severely restrictive Sharia law.

The US State Department responded to the Taliban’s new power grab by calling for an “inclusive” and “united” government that includes the “full participation” of women.

There are already reports of violence on the ground, including a woman reportedly killed on Tuesday for not wearing a head-covering in public, according to Fox News, as well as attacks on the press.

Thomas-Greenfield claims, however, that the US’ commitment to “Afghan women and children” is “unwavering.” She added that the US government will only judge the Taliban based on their “actions,” as opposed to public statements – presumably a reference to future “actions,” as the militant group has a well-documented history of oppression against women and others.

As thousands of citizens and allies still wait to be evacuated from the country – some have even been told to make long treks during which their security cannot be guaranteed – Thomas-Greenfield also claimed flights are actually leaving “24 hours a day” and the US will not stop until everyone is out.

The ambassador has faced accusations of downplaying the situation in Afghanistan and hiding behind a “strongly worded” press statement to avoid directly addressing the issues at play.

“The Taliban just survived a 20-year dose-e-doe with the greatest combined military might in the history of the world and we expect them to yield to a ‘strongly worded press statement,’” the Daily Caller’s Geoffrey Ingersoll tweeted in response to Thomas-Greenfield.

“Oh [yeah]… The Taliban cares about a ‘strongly worded press statement.’ We live in the stupidest of regimes,” activist Erielle Davidson added.

In March, Thomas-Greenfield appeared to take a much more assertive stance on women’s rights around the globe at a virtual discussion on “gender priorities.” The ambassador called for women to be in more leadership roles, specifically in regards to situations like the one the US is facing in Afghanistan.

“The evidence is overwhelming: involving women in peacekeeping significantly increases the probability that violence will end. And by promoting women’s participation and leadership – in politics, in mediations, in negotiations – we promote more security and more peace for women,” she said.