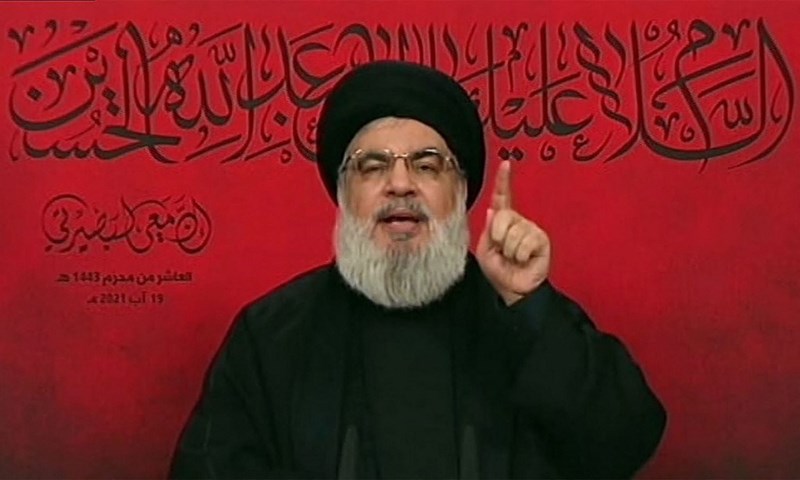 In a speech on the occasion of the tenth of Muharram, Secretary-General of Hezbollah, Sayyed Hassan Nasrallah, assured the Lebanese people that the first Iranian ship loaded with diesel is bound to set sail towards Lebanon in a few hours.

Nasrallah spoke about the rationale behind Hezbollah’s decision to request Iran’s assistance, citing the embargo imposed on Lebanon as the main reason. Nasrallah confirmed that several ships will eventually follow suit as well.

The Secretary-General warned against any attempts to intercept the ship, which will become equated to Lebanese territory the moment it sets sail, vowing to retaliate as the matter “has become linked to the pride of the Lebanese people, and we refuse to humiliate them.”

This declaration comes in the context of the Lebanese economic crisis which was fueled by foreign meddling, leading to the scarcity of ubiquitous requirements such as petroleum, diesel, and natural gas.

The ship in question is loaded with diesel, given its paramount importance in supplying electricity to vital sectors.

Nasrallah subsequently thanked Iran for its “permanent support for Lebanon and its resistance in the fight to liberate our land and repel aggression,” reminding the world of General Qassem Soleimani’s amputated hand found in the perimeters of the Baghdad airport, which has come to symbolize the sacrifices Iran is willing to make for the sake of its friends and allies.

Sayyed Nasrallah closed his remarks on Lebanon by describing the thugs who are sowing fear in the hearts of people by attacking them as “demagogues who do not represent our people,” calling for the state to do “the right thing by carrying out its responsibility,” promising to offer the party’s help.

The US Embassy in Lebanon is Behind Incitement

Regarding the US embassy in Lebanon and its role, Sayyed Nasrallah warned that it “is leading the economic and media war against Lebanon and is behind the incitement,” he added that “this embassy is not a diplomatic representation, but rather an embassy of collusion against the Lebanese people.”

On the topic of the Israeli occupation of Palestine, Sayyed Nasrallah emphasized that the top priority for the resistance is to confront the usurping Zionist entity.

“We are looking forward to the day when the Zionist invaders will leave the land of Palestine because it is the fate of the occupation and all invaders,” he said, repeating his call to stand by the Palestinians in the West Bank, the besieged Gaza Strip, al-Quds, and the diaspora as they work to regain their land from the river to the sea.

Regarding the threats to occupied Jerusalem and the holy sites, Sayyed Nasrallah called for a regional equation to preserve these sites, emphasizing that protecting the holy sites is a task delegated to the entire resistance axis, not only confined to Palestinians.

After US Defeat in Afghanistan, All Eyes on Iraq & Syria

Touching on the situation in Iraq and Syria, Sayyed Nasrallah linked it to the US defeat in Afghanistan, describing the Iraqi decision to push US troops out of the country as “a great achievement.” He called on the Iraqi people to be wary of American advisers given their failure in Afghanistan, considering the Popular Mobilization Forces (PMF) as the sole guarantee in the face of ISIS and Takfiris.

Sayyed Nasrallah went on to describe the PMF as “one of the greatest manifestations and responses to the fatwa of the religious authority in Najaf.”

Regarding the pretext of the US presence in northern Syria to fight ISIS, the Secretary-General labeled it as a “flimsy argument,” emphasizing that the region’s governments are fully capable of ending ISIS without the US’ assistance.

“American forces facilitate the persistence of ISIS and help it move from one region to another” he said, calling on the American forces to leave east of the Euphrates, considering that the real goal of their presence is to steal Syrian oil.

Sayyed Nasrallah extended his gratitude to the Iraqi factions for expressing their willingness to protect the holy sites in Palestine, stressing that the alliance of regional resistance forces alongside the Palestinian resistance will strengthen the hope for Palestine’s liberation.