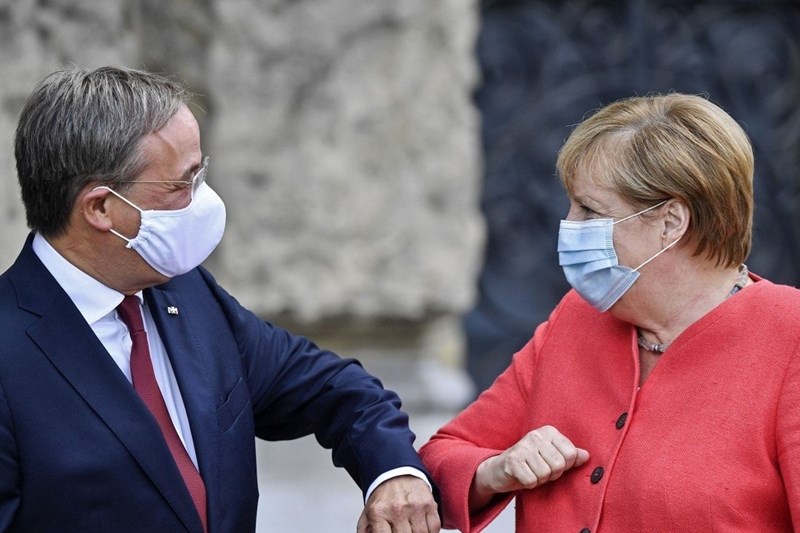 German Chancellor Angela Merkel showed strong support to her party’s candidate, CDU Leader Armin Laschet, who has seen his poll numbers slide five weeks prior to the upcoming federal elections, and expressed her full conviction in his ability to succeed her.

Merkel complimented Laschet, on Saturday, during her participation in the electoral campaign for the first time, lauding his qualities, saying, “It has always been important to him to place the individual and their inviolable dignity at the center of everything.”

She also said, “I am deeply convinced that it is precisely with this attitude that (he) will serve the people of Germany as chancellor.”

Merkel defended her decision to remain away from the campaign, saying that political officials that decide to end their work in politics should avoid interfering in campaigns.

This occasion was an opportunity for the Chancellor, who won four successful campaigns, to give one of her last electoral speeches after a 31-year political career, at a time when she remains popular in the German public opinion.

Her goal is to try to win the conservatives’ points thanks to the record approval rating she still has, as their lead continues to diminish in the weekly polls.

Merkel will again meet Armin Laschet on Monday to celebrate the 75th anniversary of the establishment of Rhine Province, the most populous province, and which Laschet ruled for 4 years.

The conservative’s points (CDU and its Christian Social Union in Bavaria ally) have dropped from 30% to 22-23%.

The Social Democratic Party has come in second place after the conservatives, with 21%. Some polls suggest that the Party’s candidate, current Finance Minister Olaf Scholz, is even ahead of the Green Party.

The Green Party has come in third place with 17%, as it’s been facing a long decline in its ratings since the beginning of Summer, much in contrast to its rise following the candidacy of Analina Berbock in April, when it managed to beat conservatives in the polls

Armin Laschet’s political mismanagement of the catastrophic flooding of July led to his speedy decline and the rise of the Social Democratic Party, especially when pictures of him laughing while accompanying the German President in a flooded town were circulated.

Five weeks ahead of the election, which all of Europe will be watching, the opposition is mounting within the CDU to have his candidacy withdrawn.

Laschet (60 years old) was elected as Leader of the Christian Democratic Union in January and found great difficulty in establishing himself in the face of his opponent, the Governor of Bavaria, Marcus Suder.