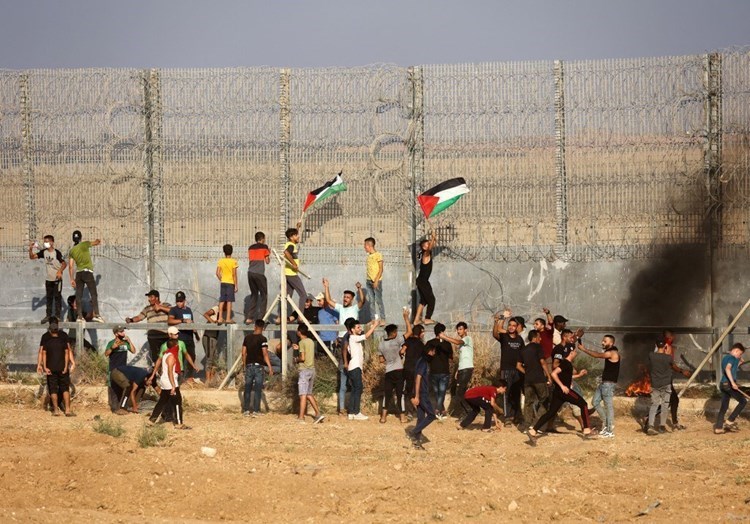 Al Mayadeen correspondent in Gaza reported that the Israeli occupation fired bullets and tear gas canisters at Palestinians near the separation fence during their participation in the “Seif al-Quds” festival marking the 52nd anniversary of the burning of Al-Aqsa Mosque.

Our correspondent mentioned that injuries were reported after the occupation forces opened fire on the demonstrators, who, in their turn, set rubber tires on fire near the separation fence east of Malaka Camp, with some of them climbing the fence, raising the Palestinian flag, and throwing stones at the occupation forces.

In a statement, the Ministry of Health in Gaza stated that 23 civilians were injured, one of whom is a 13-year-old child.

For his part, the Director of Al-Shifa Medical Complex Mohammad Abu Salmiya said that “17 injuries reached the complex, most of whom are shot in the lower limbs.”

Earlier today, Palestinians burned the settlement outpost model on Jabal Sbeih in Beita, south of Nablus, as part of the “night confusion” activities.

For his part, a leading figure in the “Islamic Jihad” Movement, Daoud Shehab, stressed that the damages to Al-Aqsa Mosque and Al-Quds “have become a thunderbolt for any future bombing and may lead to a comprehensive regional war.”

On the anniversary of the burning of Al-Aqsa Mosque, Shehab stressed the need to properly focus on what is happening in Al-Quds, pointing out that the mosque fire “is still burning and the battle is at its height at present.”

Moreover, a leading figure in the Popular Front for the Liberation of Palestine (PFLP), Jamil Mezher, declared that “it is no longer possible to maintain calm in return for the economic aggression” on Gaza, stressing that “the attack on any part of Palestine gives the Resistance the right to respond.”