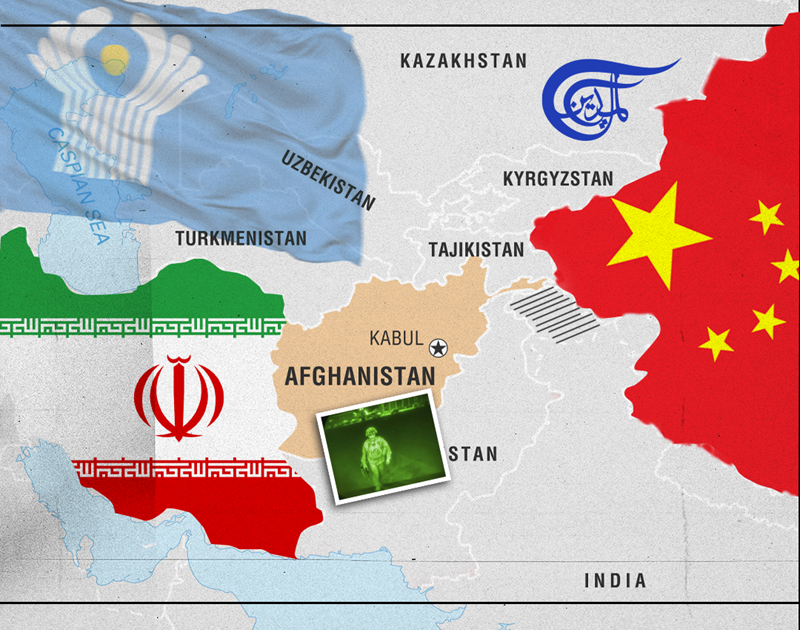 The “humiliating” US withdrawal from Afghanistan has unleashed a wave of criticism towards US president Joe Biden. Local and international critics blame his administration not only for miscalculating the withdrawal and tarnishing US credibility around the world but also for paving the way for Afghanistan’s neighboring countries China, Russia, and Iran to strengthen their geopolitical stand in central Asia. The region is adapting vastly to the US’ strategic failure in Afghanistan.

No more US leverage

The US retreat in central Asia is nothing new, it goes back years ago. The last time US troops used bases in Central Asia — beginning in 2001 and lasting until 2014 – it didn’t end so good.

In 2001, US troops were deployed to the Khanabad base in Uzbekistan, the Bishkek airport in Kyrgyzstan, and briefly to the airfield in Kulob, Tajikistan.

Almost immediately, the US deployment was a failure.

The current domino effect is simply a manifestation of a similar strategic failure which the US foreign policy has faced in Vietnam during Kennedy’s administration.

The Presence of US troops and their allies at Central Asian bases has become a huge concern for these countries.

Simultaneously, the Uzbek government told the United States to remove its troops from the Khanabad base.

During a summit of the Shanghai Cooperation Organization (SCO) in early July 2005, SCO members China and Russia backed Uzbekistan’s stance, drafting a final statement for the US and its allies to withdraw from bases in SCO member countries.

The domino effect began to unfold as the US started to consecutively withdraw its troops from Central Asia.

US troops were out of Uzbekistan before the end of 2005.

The US base at the Bishkek airport had been regularly criticized by various Kyrgyz politicians until it was eventually evacuated in 2014.

So the Central Asian countries concluded that cooperating with the United States and its Western allies could detach them from their geopolitical sheath.

In a nutshell, the US left central Asia nearly a decade later, after Russia and China influenced countries in the region to reduce their military collaboration with Washington.

Filling the US vacuum

Currently, Central Asian governments and their neighbors (China, Russia, and Iran) are engaging with the Taliban in the hope of mediating a peace deal, and eyeing to reinforce stability within Central Asia.

China, which shares a 76-kilometer (47-mile) border with Afghanistan, has said it seeks “friendly and cooperative” relations with the Taliban, as analysts stress that a stable and cooperative Kabul administration could pave the way for China to offer economic support and investment for Afghanistan’s reconstruction.

Meanwhile, a top-level Taliban delegation has recently met with Chinese Foreign Minister Wang Yi in Tianjin, promising that Afghanistan would not be used as a base for militants. On its account, China offered economic support and investment for Afghanistan’s reconstruction, strongly welcoming the chance to deepen ties with the country.

“The Taliban have repeatedly expressed their hope to develop good relations with China, and that they look forward to China’s participation in the reconstruction and development of Afghanistan,” foreign ministry spokeswoman Hua Chunying said.

In an address to the UN Security Council, a senior Chinese diplomat, Geng Shuang, said it was time to bring the Taliban into the international fold and hold US and other Western forces accountable for crimes in Afghanistan.

Replying to a question of whether China will conduct cooperation with Afghanistan under the Belt and Road Initiative (BRI) in the near future, China’s Foreign Ministry Spokesperson Wang Wenbin affirmed that China and Afghanistan are traditionally friendly neighbors.

“We always follow a friendly policy towards the entire Afghan people. China has long supported peace and reconstruction in Afghanistan, provided much assistance to its socio-economic development, and played a positive role in its endeavor to realize self-reliant growth and improve livelihood,” he added.

The top Chinese diplomat went on to say that China-Afghanistan cooperation under the BRI framework has delivered tangible benefits to our two peoples, adding that the BRI can contribute to national and regional development and prosperity, and hopes to continue to support and participate in it.

Russia’s embassy stayed operational in Kabul after the US hasty withdrawal from Afghanistan.

“We’re in close contact with CSTO members over Afghanistan … That’s why our interaction within CSTO should be strengthened,” Shoigu stressed.

On its account, the CSTO has lately confirmed it would hold military exercises in Kyrgyzstan and Tajikistan from September to October following the situation in Afghanistan.

“We are establishing ties (with Taliban officials), our embassy in Kabul is working quite actively on this,” he told Russian state television. “We have had such contacts for a long time and we will work further on them.”

A Taliban delegation visited Tehran in late January and had been received by senior Iranian officials. Iran and Afghanistan- sharing deep cultural ties and a 945km (587 miles) border- has reportedly discussed “relations between both countries, the situation of the Afghan migrants in Iran, and the current political and security situation of Afghanistan and the region.”

On his account, Saeed Khatibzadeh, spokesman for the Iranian foreign ministry confirmed that Tehran has put into consideration the Afghan government’s perspective. The official Afghan statement went on to say, “Iran wants to make sure that a post-conflict Afghanistan will remain a center of regional and international cooperation.”

In a landlocked country, it looks like the US has pulled its last string in Afghanistan after twenty years of war which did cost, 46,000 Afghan victims and USD2.3 trillion losses.

What lies on the near horizon is firmly in the hands of the Asian countries in question. Their efforts now are focusing on filling the void left by the US by building instead of disrupting.