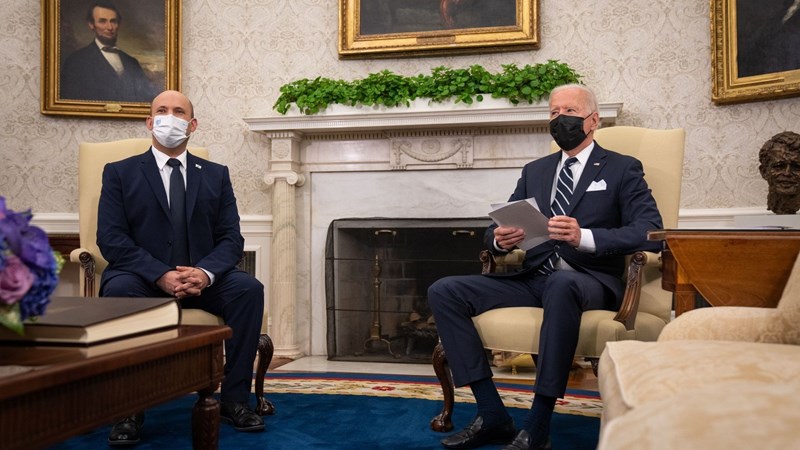 US President Joe Biden told Israeli Prime Minister Naftali Bennett during their White House meeting that he will not abandon his plan to reopen the US consulate in Occupied Jerusalem (Al-Quds), Axios reported.

The move brings up a major point of disputation between the two administrations.

The consulate handled Palestinian relations for 25 years before being closed down by former US President Donald Trump. Bennett’s government officials see the consulate issue as a political hot potato that could destabilize their unwieldy coalition, Axios said.

According to Israeli and US officials briefed on the meetings, Biden brought up the consulate issue several times during his bilateral meeting with Bennett and in the expanded meeting with their aides.

Biden emphasized his campaign promise to reopen the consulate, a pledge that Secretary of State Tony Blinken made to follow through.

The reopening of the consulate, according to several right-wing ministers, including Interior Minister Ayelet Shaked and Justice Minister Gideon Sa’ar, would be an infringement on Israeli sovereignty in Al-Quds. It’s also a prime target for Benjamin Netanyahu, the new opposition leader.

According to the website, this would be a prime point of attack for Benjamin Netanyahu against the Bennett administration.

One senior official told Axios that “if the Biden administration wants to see Netanyahu abandoning his Pilates classes and going back to the Prime Minister’s Office, this is the best way to do it,” adding the Israelis had voiced their concerns about the threatening potential of the consulate issue several times to the Biden administration.

Furthermore, the Biden administration has previously agreed to postpone the reopening of the consulate until after Bennett’s budget deadline of Nov. 4.

In 2017, Trump recognized Al-Quds as “Israel’s” capital, and the consulate was later merged into the new US Embassy there, in violation of international law.

The Palestinians regard Al-Quds as their capital. East Al-Quds, the former consulate’s location, is widely regarded as the future capital of any Palestinian state, Axios said.

During a Zoom call with the Conference of Presidents of Major American Jewish Organizations, Bennett has lately said that “only one country has a capital in Jerusalem: Israel. I don’t want to get into specifics, but this is my firm stance “, adding that he wants a “no drama” relationship with the Biden administration and to solve things in the quietest way possible after the budget passes in November.

On its account, the Foreign Affairs Ministry of the Palestinian Authority said that the Israeli government’s opposition to the US consulate is a roadblock to peace and part of Israeli efforts to change the historical and legal status of the city.

Last week, US State Department spokesperson Ned Price emphasized that Blinken’s commitment made during a visit to “Israel” and the Palestinian Authority in May, remains in place.

The White House did not respond to a request for comment for this story.

The website concluded that no action on this issue is expected before November, giving both parties time to work toward a mutually acceptable solution.