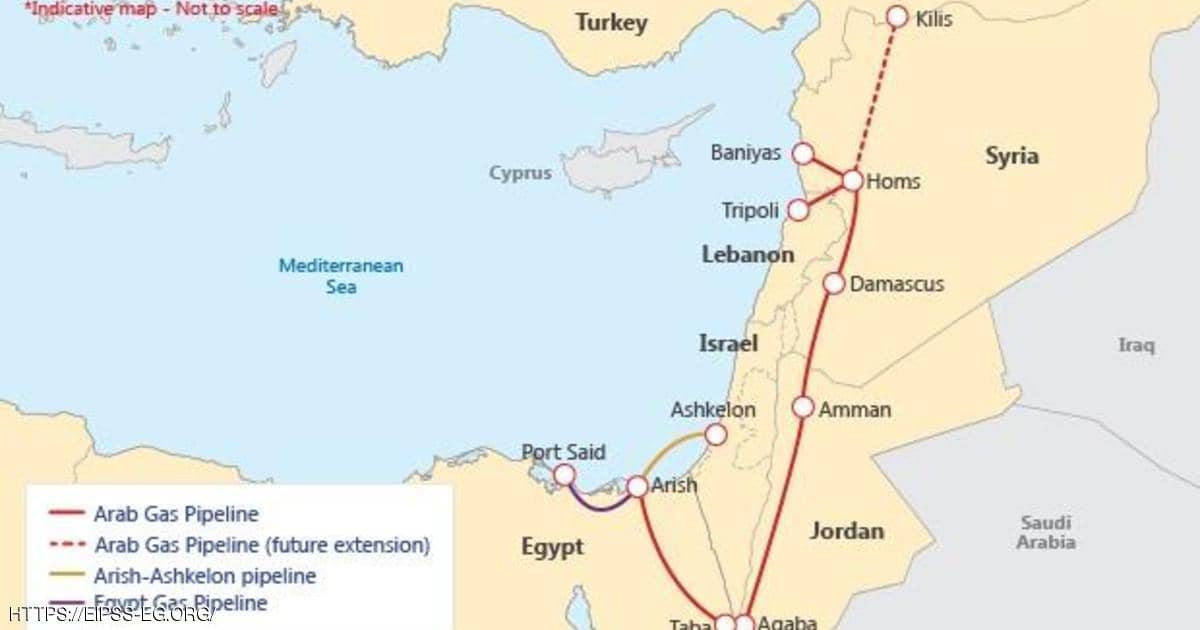 Yesterday, in Jordan the energy ministers of Egypt, Syria, Lebanon and Jordan met and agreed on a plan to supply Lebanon with Egyptian natural gas to convert into electricity. The joint press conference confirmed they all had agreed to revive the Arab Gas Pipeline (AGP) which links Egyptian gas to Jordan, where it will be used to produce additional electricity for the network linking Jordan with Lebanon via Syria.

This follows a meeting in Damascus on September 4 between Lebanese and Syrian officials discussing the Lebanese request to import gas from Egypt and Electricity from Jordan through the Syrian territory.

However, US sanctions on Syria are holding up the smooth process to help beleaguered Lebanon, where the public has no access to electricity, gas and even water is scarce.

Egypt and Jordan are pressuring the Biden administration to waive the Syrian sanctions under the Caesar Act, to facilitate the multi-faceted regional deal to go through.  The Caesar Act was passed by the US Congress to hurt the Syrian government, but has instead made the Syrian public suffer in a multitude of ways from currency devaluation to hyperinflation.

Currently, Syria is suffering from a severe lack of electricity, with most homes living on 3-4 hours per day.  Gasoline powered generators are not the solution, as there is also a severe shortage of gasoline which is rationed. As bad as the situation is in Syria because of US sanctions, the situation in Lebanon is even far worse.

The World Bank has offered to provide funding for the project, but is worried about corruption among the Lebanese ruling elite, who are responsible for the dire situation in Lebanon, which the World Bank has said is the worse financial crisis in 150 years.

In a press conference on September 4, the Secretary-General of the Lebanese-Syrian Higher Council, Nasri Khoury, said: “The Lebanese side demanded Syria’s assistance to Lebanon in obtaining Egyptian gas and Jordanian electricity through Syrian territory. The Syrian side affirmed Syria’s readiness to meet that request.”

Lebanon has descended into severe failure after the public revolted against the systemic corruption of the ruling elite. The government failed to provide even the most basic of services: water, gasoline, food, and electricity.  Many hospitals have closed, and those open struggle to find medicine.

In the wake of the Lebanese collapse, an effort was made to draw electrical energy from Jordan through Syria, by providing quantities of Egyptian gas to Jordan, enabling it to produce additional quantities of electricity to be placed on the grid linking Jordan with Lebanon via Syria.

Egypt had supplied Lebanon with gas in 2009 and 2010, but supplies ended soon after as Egypt’s gas production dwindled. Egypt restarted exporting gas through the pipeline in 2018, but the gas has overwhelmingly been going to Jordan.

Electricite du Liban signed a deal with Iraq to buy heavy fuel oil to be converted into electricity, which should cover around one third of EDL’s fuel needs, and supply the country for about four months.

Egyptian gas is planned to reach Lebanon to operate gas-fired power stations, which have been out of service for 11 years.

Washington is also being asked to grant a separate license to Jordan to distribute electricity from its power grid to Lebanon, which would need to pass through Syria.

The US government has placed Syria under strict oil sector sanctions, which make the AGP deal complicated for all the regional stakeholders.

In 2011, when the ‘Arab Spring’ violence began, armed terrorists in Egypt attacked the Egyptian side of the AGP numerous times.  The attack on a pipeline isn’t aimed at changing the government, or bringing freedom and democracy to the Middle East.  Those attacks were aimed to hurt and terrorize the civilian population, and most likely were carried out by locals who were following the Muslim Brotherhood political ideology which justified the slaughter of Muslims, like themselves, to remove a secular government, in the case of Syria, and establish an Islamic State.

The Homs section of the pipeline was attacked in 2012 when CNN’s Arwa Damon was embedded with the terrorists there.

In 2016, and in 2020 the terrorists attacked the AGP in Syria. The Syrian population early on came to know that the terrorists were treating them as the enemy.  This is why the Free Syrian Army, and their Al Qaeda affiliates lost their war against the Syrian people, because they failed to receive the support and participation of the public, who came to despise them.

History of the pipeline

The AGP is 1,200 km-long and is a trans-regional gas export pipeline built to carry natural gas from Egypt to Jordan, Syria and Lebanon.

The Egyptian Government in 1995 allowed national and international oil and gas companies to actively drill for gas. The domestic demand for gas was satisfied in 1999, and the government started looking for export markets for the surplus.

In 2001, Egypt and Jordan began dialogues, which later included Syria and Lebanon. Israel, Turkey and Iraq also signed deals to co-operate in the AGP.

The AGP has four sections. The first section extends from Arish in Egypt to Aqaba in Jordan.

The second section runs from Aqaba to El Rehab, which is near the Jordanian-Syrian borders. The third section extends from Jordan (El Rehab) to Syria (Jabber).

The fourth section consists of a gas network in Syria, and has been operational since 2008. It runs from Jabber (Syrian side of Jordanian-Syrian borders) to the Syrian-Turkish borders, ending in Lebanon. This section has four segments. Segment one runs from Jabber to Homs in Syria, while the second segment connects cities of Homs and Aleppo, Syria. The third segment extends from Aleppo to the Syrian-Turkish borders. The fourth segment connects Homs in Syria with Tripoli in Lebanon, and this section includes four launching / receiving stations, 12 valve stations and a metering station.

The AGP can also connect Iraq’s gas grid to facilitate the export of Iraqi gas to the European market.

In January 2008, a Memorandum of Understanding was signed between Turkey and Syria for the extension of the AGP from Homs, in Syria, to the Turkish border city of Kilis. From Turkey, the AGP is likely to be connected to the proposed Nabucco pipeline for delivery of the Egyptian gas in to Europe. The Arab Gas Pipeline is also to be connected with Iraq’s gas grid to facilitate the export of Iraqi gas to the European market.

Will the US waive sanctions to help the Syrian and Lebanese people?  France’s President Macron recently co- hosted a regional meeting in Baghdad, and previously hosted a meeting to help Lebanon recover. Will Macron ask Biden to waive the sanctions on Syria to make this deal happen, or will France continue to take their orders from Washington?  Does Biden have the political clout to make a waiver on sanctions be accepted by the US Congress?  The Arab Gas Pipeline is a group of neighbors trying to work together to solve their own problems, yet it is the US who holds their finger on the light switch.