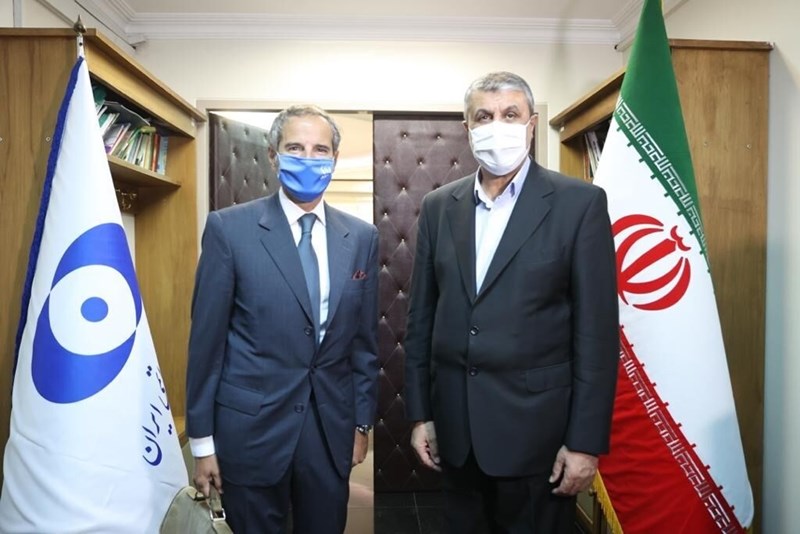 The director of Iran’s Atomic Energy Organization (AEOI), Mohammad Eslami, said on Sunday that the talks with the IAEA’s Director General are to create opportunities to develop cooperation within the context of the IAEA’s regulations.

The AEOI Chief declared in a joint press conference with IAEA Director General Rafael Grossi that the latter visited Tehran at the invitation of the IAEA and that “good, constructive” talks were held with him. He added that all issues between the two agencies are of a technical nature, and that “there is no room for politics” in their relations. Eslami also said that Iran will be present at the next IAEA meeting, and will continue talks on the sidelines.

The agreement behind the visit

Eslami also said that Grossi is set to visit Tehran again in the near future. Both sides also agreed that the memory card of technical surveillance cameras would be replaced, with the storage media “kept under the joint IAEA and AEOI seals” in Iran.

“What is important to us,” the AEOI Chief said, is “trust-building,” emphasizing that mutual trust between the AEOI and IAEA must be preserved,” and that the latter must play a major role in fulfilling its legal commitments of enforcing Iran’s nuclear energy and Iran’s progress.

Informed diplomats had reported yesterday that IAEA Director General, Rafael Grossi, will visit Iran “for talks that may ease a standoff between Iran and the West,” to prevent the failure of the negotiations designed to revive Iran’s nuclear deal.

Iran has repeatedly stated that its nuclear program is peaceful and “poses no threat to the region.”