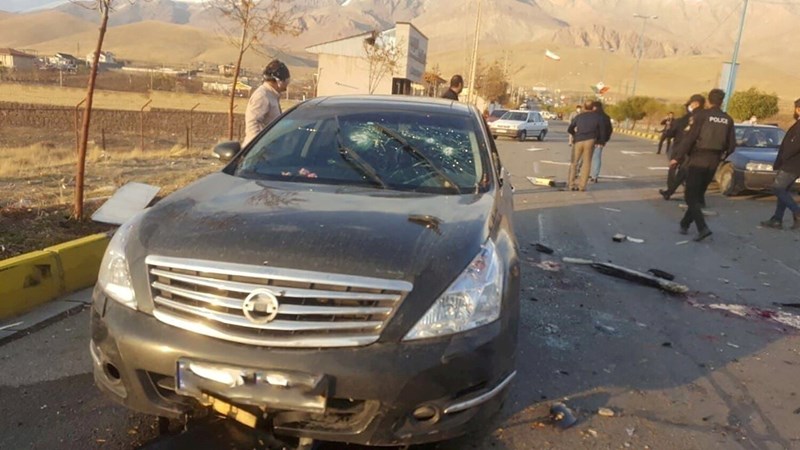 The New York Times revealed on Saturday that Israeli agents wanted to take out Iran’s top nuclear scientist Mohsen Fakhrizadeh for years, adding that the latter was assassinated by a killer robot machine gun.

The machine in question was kitted out with artificial intelligence and multiple cameras and capable of firing 600 bullets a minute.

The new details were a result of interviews with American, Israeli, and Iranian officials.

The report unmasked that Fakhrizadeh has been assassinated by a bullet fired from a machine gun via satellite: The Mossad sniper who pulled the trigger was thousands of miles away.

“Israel’s” plan to assassinate Fakhrizadeh was said to have been in the works for many years, with several previous plots mulled on the belief that he was leading Iran’s nuclear weapons race, the report added.

As it became more likely that Donald Trump would not be re-elected, the plan became more aggressive.

The plan for the assassination began following a series of meetings between Israeli officials, led by Israeli Mossad director Yossi Cohen, and top American officials, including US President Donald Trump, Secretary of State Mike Pompeo, and CIA Director Gina Haspel, toward the end of 2019 and early 2020.

Israeli and US officials decided to carry out the attack remotely, with no agents on the ground at the time.

Drones would have been easy to detect in the distant countryside location, so a remote-controlled machine gun was chosen, the report said.

According to one intelligence official, the gun chosen was a special model of a Belgian-made FN MAG machine gun that was then attached to an advanced robotic apparatus.

Long before November 27, the date of the assassination, “Israel” began smuggling the gun into Iran.

It had to be disassembled and transported in parts, since it weighed around a ton altogether, before being reassembled closer to the kill site.

The machine gun was then fitted into the back of a blue Nissan Zamyad pickup truck, which was stationed by the side of the road, with a tarpaulin used to disguise the machinery inside.

All the assassins had to do now was wait for their target to come out on the road.

The first car in the Iranian scientist’s convoy carried security personnel as it left the Caspian coast city of Rostamkala. It was followed by the unarmored black Nissan driven by Mr. Fakhrizadeh, who was accompanied by his wife, Sadigheh Ghasemi.

The report added that the top Iranian scientist refused to ride in an armored car, insisting on driving his car himself. Whenever he drove with his wife, he would ask the bodyguards to follow him in a separate car instead of accompanying them.

The motorcade arrived at the Firuzkouh Road U-turn shortly before 3:30 p.m. Mr. Fakhrizadeh’s car came to a stop, and he was positively identified by the operators, who also saw his wife sitting beside him.

The convoy turned right on Imam Khomeini Boulevard, and the lead car then zipped ahead to the house to inspect it before the arrival of Mr. Fakhrizadeh. Its departure left Mr. Fakhrizadeh’s car fully exposed, the report said.

The convoy slowed down for a speed bump, during which the sniper took the shot, firing multiple bullets which struck below the windshield, and causing the car to come to a halt.

With the help of the AI’s accuracy, the shooter repositioned and fired three additional times, now hitting the target in the shoulder.

The entire ambush was over within one minute of the first fired round.