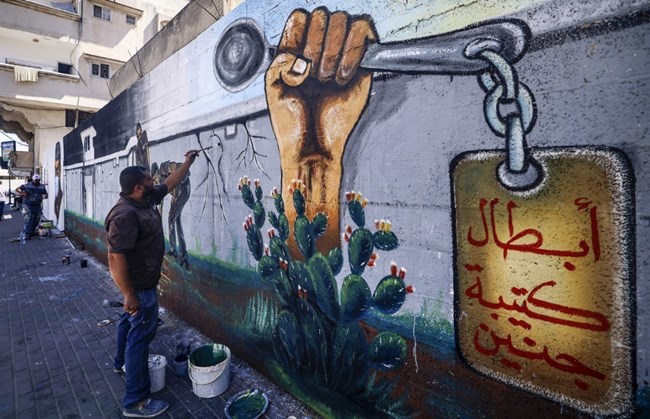 100 Prisoners in Ofer Prison to Initiate a Gradual Strike

The Palestinian Prisoners’ Club has confirmed that 100 prisoners of all factions in Ofer Prison will start a gradual strike on Monday in light of the prison administration reneging on its agreement of stopping the abusive and retributive measures against the prisoners, which it increased following the breakout from Gilboa Prison.

The Club also clarified that the gradual strike will be initiated in case the Israeli occupation continues its abusive, retributive measures, and this is to be determined based on the prison administration’s stance in the coming hours.

Among the measures the Israeli prison administration imposed recently are repression, transfer, inspection, closing all prisoners’ sections, shortening break periods, closing facilities such as the laundry and the canteen, keeping in mind that the prisoners go through such measures daily, and the administration only stepped them up recently.

In addition, the Higher Emergency Committee for the prisoners of the Islamic Jihad Movement in occupation prisons announced that it had taken a number of steps to counter the repressive measures carried out by the Zionist prison service against the prisoners of the Movement.

The committee confirmed that dozens of prisoners from the Islamic Jihad Movement reject their placement in different rooms and sections in prisons and detention centers.

It also revealed that the repressive Israeli units and forces inside the prisons are preparing to attack them.

On the other hand, the Israeli occupation extended the detention of the two prisoners, Munadel Nafi’at and Ayham Kamamji for 10 days after re-arresting them in the city of Jenin in the northern occupied West Bank.

Nafi’at’s lawyer stated that he was assaulted during his arrest, while Kammaji was shot twice during his attempt to enter Jenin.

Earlier, Al Mayadeen correspondent had confirmed that the Israeli occupation forces are carrying out retaliatory acts against the six prisoners and that strict security measures were tightened in the occupied territories.

On Sunday, PIJ Secretary-General, Ziad al-Nakhalah, sent a message to the six prisoners, saying: “You have united the Palestinian people, the ummah, and all the free people of the world.”

Al-Nakhalah, in his message to the heroes of the Jenin Brigade, said that they outlined the Palestinian people’s will in a very turbulent moment of silence. “Six men… greater than all men,” he said.

Six prisoners in the Israeli occupation prisons have continued the open hunger strike they started several weeks ago.

In protest of the ongoing administrative detention, prisoner Kayed al-Fasfoos has been on a hunger strike for 66 days, prisoner Meqdad al-Qawasma for 59 days, prisoner Alaa al-Araj for 41 days, prisoner Hisham Abu Hawash for 33 days, and prisoner Shadi Abu Akr for 25 days.

The arrests can never obscure the achievement

The Israeli occupation forces had announced on Sunday the re-arrest of the two remaining prisoners who broke out of Gilboa occupation prison, Ayham Kamamji and Munadel Nafi’at, following confrontations with live bullets with Jenin youths.

On September 10, the Israeli occupation forces arrested two prisoners who broke out of Gilboa prison, Yaqoub Qadri and Mahmoud al-Arida, followed by Zakaria Zubaidi and Mohammed al-Arida on September 11.

It is worth mentioning that the 6 prisoners managed to break out of Gilboa prison near the occupied city of Bisan, at dawn on Monday, September 6th. This prison is considered one of the Israeli occupation’s most fortified prisons.